With China now the world’s second-largest economy and a major player on the global stage, Cornell is building upon and extending its long-standing engagement with the nation and its people in order to contribute to the advancement of bilateral relations. We are prepared to create long-term partnerships to increase our presence in China and raise the University’s profile there. 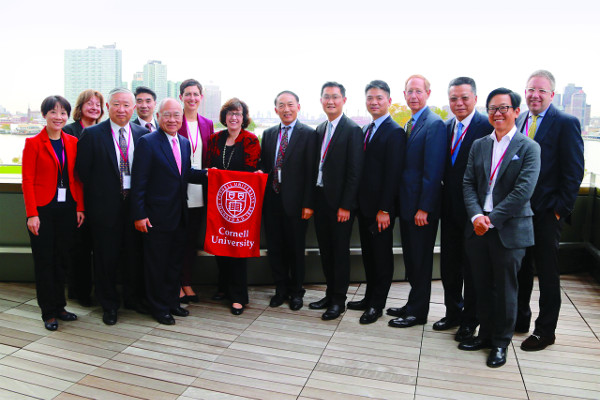 Meeting of the minds: Pollack (center left, behind banner) with members of the Cornell China Advisory BoardPeter Michaelis Photography

Cornell offered its first course in Chinese language in 1879, and we educated many of China’s future leaders in the late nineteenth and early twentieth century. Cornell’s collaborative research with Chinese institutions, which began in the 1920s, initially focused on increasing yields of important food crops, in the process training a generation of Chinese plant breeders. Today, Cornell partners with peer institutions throughout China on teaching and research projects—from agriculture and food science to engineering and sustainability to business management and economics to fiber science and apparel design. The Cornell Institute for China Economic Research, for example, draws together sixteen faculty members from seven departments across four colleges for research, educational opportunities, and engagement with policymakers to bring Cornell to China and China to Cornell.

Our undergraduate China and Asia-Pacific Studies program, founded a dozen years ago through the vision of Michael Zak ’75, includes four years of intensive instruction in Chinese language plus semester-long internships in Washington, D.C., and Beijing. Cornell Abroad administers semester and academic year study programs in China for Cornell students, and the College of Agriculture and Life Sciences offers bachelor of science programs whereby Chinese students complete two years of study at a Chinese partner university, followed by two years at CALS. Students from China now make up the largest segment of our international student population by far, and the alumni community in China, some 1,450 strong, is our largest outside the U.S. and Canada.

We are now poised to take these initiatives to the next level by establishing a Cornell China Center in Beijing. It will have three basic purposes: to build capacity for the delivery of educational content and to spark innovative and collaborative research projects that span and benefit both countries; to be a vibrant gathering place for Cornell faculty, alumni, students, and prospective students and for Chinese scholars, friends, collaborators, and partners; and to raise the University’s profile in China, giving us a presence that reflects our distinguished reputation and helping cement a permanent bond between Cornell and the people of China. A faculty committee is guiding academic aspects of this initiative, and Cornell staff in Ithaca, New York City, and Beijing are already working on implementation from a temporary space in Beijing’s Central Business District.

Additionally, we are very fortunate to have the advice and support of a distinguished Cornell China Advisory Board chaired by Gang Yu, MS ’86, co-founder and chairman of New Peak Group. I had the privilege of participating in the board’s October 2017 meeting at Cornell Tech on Roosevelt Island. Its members are some of our most distinguished alumni and friends in China, and I am greatly encouraged by their understanding of the role that the University can play in this part of the world and by their willingness to support our efforts.

From the very beginning, Cornell has been a global university. Our expanding efforts in China illustrate a broad commitment to international activities that are both a part of our past and critical to our future. I am looking forward to meeting many more alumni living abroad with visits to India, Korea, and Hong Kong on my schedule for the spring 2018 semester.