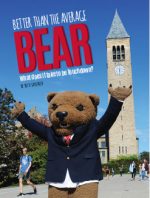 I enjoyed the article about Touchdown the Big Red Bear in the recent CAM (November/December 2017). Although the identities of many who played the bear remain secret, I can reveal at least one.

In mid-February 1967, Cornell and Princeton were tied for the Ivy League basketball lead, Cornell having handed Princeton their only League loss. Their second game, to be played in Princeton on Saturday, February 25, became a must-win for both teams. My sophomore roommate and I drove to Philadelphia the day before for a game against Penn, which Cornell won handily. We planned to go to Princeton the next day, even though there were no tickets to be had for the game, which was to be played in the tight quarters of Dillon Gym.

In the 1960s and Seventies those who played the Big Red Bear weren’t as well organized as they are today, and the mascot didn’t necessarily travel to all the away games. Somehow, I discovered this fact. Before leaving Philadelphia Saturday morning, we located a costume shop and rented a beautiful “Big Red Bear.”

Upon arriving in Princeton I donned my disguise, walked directly in the team entrance, and spent the game sweating
on the sidelines, cheering for Cornell, irritating the tiger, and taking insults from Princeton fans. I’m not sure I had a very good view of the game through the costume, but I definitely had the best seat.

Unfortunately, Cornell lost the game and finished second in the Ivy League, but our trip to Princeton was a great memory. I wish I had some pictures of this escapade; if you know of anyone who might, I’d love to contact them.

Getting Into The Spirit

I enjoyed reading the CAM article about the origins of Zinck’s Night (“Happy Hour”, September/October 2017), now in over 100 bars around the world. The article left out a key chapter of the story, though: how did it go from a weekly campus event to an annual event at local alumni clubs?

The Class of 1975 originated the idea to deal with a problem that younger graduates faced in the late 1970s with local alumni clubs. My first local alumni chapter meeting in Houston after graduation felt like I had wandered onto a trans-Atlantic cruise ship, because the average age was over sixty-five. When I compared notes with classmates, it was the same everywhere outside of New York City, and few were interested in going back to their local alumni chapters for meetings. As the newly elected alumni class president after graduation, I was trying to figure out how we could re-invigorate local clubs with younger alums and keep everyone’s heartstrings tied to Cornell.

We knew that young Cornellians liked to drink, so why not host parties across the country in popular bars? We set up eight parties simultaneously in May 1977 and cohosted them with the classes of 1974 and 1976 (Ithaca: Craig Esposito ’74; NYC: Lou Walcer ’74; Boston: Neal Haber ’75; Philadelphia: John Foote ’74; San Francisco: Sandy Ward ‘76; Washington, D.C.: Ann Spudis ’76; Chicago: Leon Rafner ’74, MEN ’75; I organized the Cleveland event). After the first year’s success, we adopted the name Spirit of Zinck’s, moved it to the fall of the following year, and expanded the number of locations and classes invited.

The lesson is: never underestimate how much Cornellians like to party together!

In the September/October 2017 issue, we asked you to share your favorite Cornell sports moments.

The 1962 varsity football game between Cornell and Princeton, which Cornell won 35-34, was the most exciting football game I have even seen—college or professional. I will never forget the miraculous running and passing exploits of Gary Wood ’64. It is unfortunate that the films to this game have apparently been lost, but all the Cornellians present will never forget it.

SPEAK UP! CAM encourages letters and comments from readers on the magazine’s content. They may be edited for length, clarity, and civility. We are not able to publish and respond to all correspondence received. Send to: Editor, Cornell Alumni Magazine, 401 East State Street, Suite 301, Ithaca, NY 14850; jeb375@cornell.edu or submit a letter online.