Ezra’s Tunnel Through Gorge to Close

Ithaca’s Common Council has voted to fence off Ezra’s Tunnel. Blasted through the side of Fall Creek Gorge by the University’s founder in the early 1830s to obtain water to power nearby mills, the tunnel has been the subject of debate in recent years due to safety concerns: it offers access not only to the gorge but to an illegal swimming hole where two Cornellians drowned in recent years: Winston Perez Ventura ’22 last August and Kendrick Castro ’11 in spring 2011, the day after he graduated. While some have argued in favor of closing off the tunnel, others have decried the move as overly paternalistic and draconian, advocating warning signs instead. “Unfettered access to the natural world is one of the perks of living in Ithaca,” Ithaca Mayor Svante Myrick ’09 told the New York Times in early December. “But this is an attractive nuisance—a danger that is too cleverly disguised.”

The Student Assembly (SA) has voted to stop funding Cornell Cinema, reducing to zero its allocation from the activity fee paid by all undergrads, after having supported it for more than two decades. For the past two academic years, the cinema has received $10.90 of the approximately $240 annual fee, with other portions going to entities like the Slope Day programming board, Convocation, and the Women’s Resource Center. The cinema, which had previously faced SA demands to cut costs, had requested an allocation of $8.50 for 2018–20. The funding that the cinema received in 2016–18, totaling about $150,000 a year, had represented 30 percent of its budget; the effect of the defunding on its future is unclear. The SA debate, which played out during the fall semester, sparked a passionate reaction from the cinema’s student and alumni fans, including a change.org petition decrying the defunding that garnered some 4,000 signatures. On a website explaining its decision, the SA called the cinema “unsustainable,” noting that over the past few years, it “has failed to comply with formal and informal requests of the Assembly to improve its efficiency.” 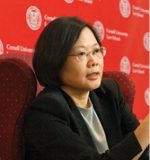 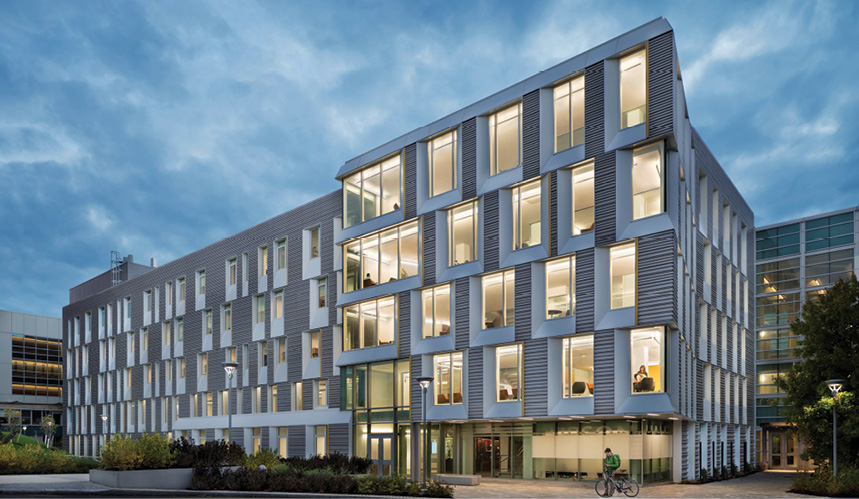 LOOKING UP(SON): The $74.5 million gut renovation of Upson Hall—part of a $300 million, decade-long overhaul of the Engineering Quad—has been completed. The design team on the project included two architecture alumni, Robert Goodwin, BArch ’84, and David Lewis, MA ’92. The 1956 building, home to mechanical and aerospace engineering, had originally been designed by two Cornellians, Lawrence Perkins ’30, BArch ’31, and Philip Will ’28, BArch ’30.Michael Moran Photography

‘ It’s kind of like having a depth of knowledge on NASCAR and you’ve gone to a lot of races, but nothing in your experience equips you for getting behind the wheel and driving at 200 miles per hour.’

What item belonging to “Science Guy” Bill Nye ’77 is on display at the Smithsonian’s National Museum of American History until July 4, 2018?

A Cornell-led team has found that fungicides stunt the growth of bee colonies and can increase the insects’ susceptibility to a fatal gut infection. It was previously thought that factors such as insecticides or changes in land use were largely responsible for the bee population decline.

After analyzing nearly 9,000 national surveys, policy analysis and management PhD candidate Erin McCauley found that people who have disabilities are more likely to be arrested than those who don’t. Black men with disabilities were at particularly high risk, with 55 percent arrested by age twenty-eight.

Scientists at the Boyce Thompson Institute have sequenced the genomes of two pumpkin species—Cucurbita maxima and Cucurbita moschata—to better understand their contrasting traits. The work could facilitate breeding of more nutritious pumpkins.

Researchers at the Medical and Vet colleges have answered the long-standing question as to why testicular cancer responds so well to chemotherapy, even after it has metastasized. They found that testicular cancer stem cells are especially sensitive to chemo—potentially providing insights into treating other forms of the disease.

In the first study of its kind, sociology professor Steven Alvarado found that people who spend any part of their childhood living in disadvantaged neighborhoods are 75 percent more likely to experience unemployment as adults.

The Bridge—the dramatic glass building that houses companies collaborating with faculty and students on the Tech campus—has been renamed the Tata Innovation Center. Ratan Tata ’59, BArch ’62, a Cornell trustee and benefactor, is chairman emeritus of a group of family companies that are among India’s leading businesses. One of those, Tata Consultancy Services, has made what the University calls a $50 million “investment” in Cornell Tech, which “includes a significant gift for the first phase of capital development on the Roosevelt Island campus, as well as support for collaborating on technology research and expanding K–12 digital literacy programs in New York City.”

Engineering Dean Lance Collins (left), winner of the inaugural Mosaic Medal of Distinction from Cornell Mosaic, an organization that promotes involvement with the University by diverse alumni.

Vincent Boudreau, PhD ’93, named president of City College of New York. He had been serving on an interim basis for a year, after Lisa Staiano-Coico, PhD ’81, stepped down amid allegations of financial impropriety.

That two Cornell-related projects are vying for the Grammy for “Best Boxed or Special Limited Edition Package”? The nominees include the fortieth anniversary edition of the Voyager Golden Record—the “message from humanity” spearheaded by the late astronomy professor Carl Sagan—and Get Shown the Light, a recording of the Grateful Dead’s legendary May 1977 show in Barton Hall.

Cornell’s oldest living professor emeritus has passed away at the age of 107. Olaf Larson, a rural sociologist who taught on the Hill for seventy-one years, died in Florida on November 14. He published two of his books, including the autobiography When Horses Pulled the Plow, after turning 100.