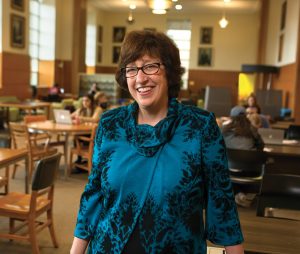 On September 13, we will celebrate the formal opening of Cornell Tech’s new Roosevelt Island campus. This exciting event represents a truly transformational moment for the University.

The Ithaca campus will always be Cornell’s heart and soul. Yet we have had a presence in New York City for more than a century, most notably with Weill Cornell Medicine, and Cornell Tech is a remarkable expansion of that presence. The complementary advantages that are being opened up with Cornell Tech will amplify the strengths of the Ithaca campus. Cornell Tech is pioneering a new approach to graduate education for the digital age, bridging the gap between academia and industry, and fostering entrepreneurship on campus and in the city’s tech ecosystem.

Producing leading-edge research is central to Cornell Tech’s mission. Already, it has more than thirty faculty members recruited from top universities, and distinguished practitioner faculty who remain actively engaged in industry. Research at Cornell Tech aims to have both major academic impact and substantial real-world benefits in areas including human-computer interaction, security and privacy, artificial intelligence, data and modeling, business, and law and policy.

Cornell Tech master’s students spend a significant portion of their time learning and working side by side in a studio-based core curriculum, practicing entrepreneurship, product design, management, prototyping, and other essential skills. Among the projects last year were a high-tech teddy bear that translates facial expressions into emoticons to help children with autism decipher other people’s emotions; an app to help international travelers who have paid “value-added” taxes on purchases more easily claim the refunds to which they are entitled; and an app to encourage low-income New Yorkers to save money when their incomes are higher, creating more financial stability if their incomes decline.

The Cornell Tech approach is synced to the needs of New York City’s tech sector—and we are already seeing the benefits of that in start-ups formed, venture capital raised, and people employed in companies created as an outgrowth of the work being done there. In fact, the Jacobs Technion­–Cornell Institute at Cornell Tech, a partnership with the Technion–Israel Institute of Technology, focuses its academic programs on key tech industries in the city—health tech and connective media—while the Jacobs Runway Startup Postdoc Program helps recent PhDs create companies and products that relate to their doctoral research. To give just one example, a Jacobs postdoc and a researcher at Weill Cornell Medicine recently created a start-up to offer microbial surveillance services to hospitals to help them better protect patients from hospital-acquired infections.

Cornell Tech also extends its expertise beyond its enrolled students. It is working with the New York City public schools to train 5,000 teachers to teach computer science. And through Women in Technology and Entrepreneurship in New York, in partnership with the City University of New York, it is encouraging women—from high school students to undergraduate and graduate students—to participate in the tech industry.

Even the design of the new campus presents opportunities for learning and innovation. For example, Cornell Tech’s first academic building, the Emma and Georgina Bloomberg Center, aims to generate sufficient power for its own operations, and the campus’s first residential tower is the world’s first high-rise “passive house” building, constructed to exacting standards of energy efficiency.

Cornell’s original land grant mission was to bring new knowledge in agriculture and the “mechanic arts” to our students and the wider public. With the opening of Cornell Tech—thanks to our “second land grant” from the City of New York and the support of the city, corporations, foundations, and private philanthropy—we are entering a new era, bringing the fruits of the digital age to the people of New York City, the state, and the world.

Equally exciting are the opportunities for faculty and students that are becoming available through closer connection between the Ithaca campus—with its extraordinary intellectual breadth—and Cornell’s New York City programs, which are thriving in the cultural, social, and economic richness of the greatest city in the world. The opening of Cornell Tech is an important milestone and a harbinger of the even brighter future that I see for Cornell.