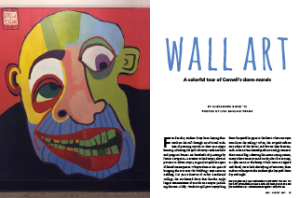 In “Wall Art” (July/August 2017) we asked readers to share their dorm mural tales.

I was lucky enough to have moved into a dorm room as a freshman that had a mural painted by someone long before I arrived on the Hill. To the best of my recollection it was an abstract green and brown painting. I remember having upperclassmen tell me how lucky I was to be in “possession” of that room. Unfortunately, I don’t have a picture, and the dorm (U-Hall 4) is long gone. Does anyone have a photo or remember the painting? It was on the first floor; I think the room number was 4011.

The staircase silhouette mural in Risley happened the weekend of November 6–8, 1998. Each person had their silhouette drawn, then painted it however they liked. The “Eat at Joe’s” picture is from a mural in Risley’s second “lost hallway,” done by members and friends of the Prudence Risley Travelling Moonshine Orchestra, “Cornell’s only reasonably competent jug band.” The mural contains many visual puns and inside jokes. I am still ashamed that I never finished the flowers on the wisteria border. Someone else can feel free to fill them in.

A few friends and I painted the trompe l’oeil Risley tower mural. They are: Felix Rodriguez ’99, ME ’00, Josh Pollak ’99, ME ’00, and Jaime Vallés ’99; Dan Barrett ’98 masterminded the scaffolding. Too late to get in trouble for building scaffolding in the tower?

I painted a Beauty and the Beast mural in Donlon. I’ve always wondered if it was still there. My only “all-nighter” in college was spent completing that mural.

I painted the logo for the band Asia and the Rocky Horror Picture Show lips and dripping letters on the fifth floor of Dickson. Res Life funded this, for which I was grateful. This was in 1983, so probably long gone. One day I walked down the back stairs and came out on the second floor, where someone was drawing a perfect, wall-sized rendering of the cover photo for Born to Run.

I was at the painting party when the Cascadilla Hall mural was painted. I believe the primary artist was Jason Hsiao ’01.

A caption in our “Wall Art” feature incorrectly identified the artist of a tree mural in Donlon Hall. Although Aimee Buduan Hartono ’06 obtained permission for the mural and did some base painting, the actual artist was Benjamin Stein ’08. CAM regrets the error.

I was incredibly moved by the article by Faiza Ahmad ’19 in the July/August 2017 issue [“Whole Cloth”] describing why she wears the hijab. As I read it, I realized how closely her reasons for declaring pride in her femininity and her religion mirrored my reasons for adopting an afro hairstyle in 1968. I had graduated from Cornell by then, but the upheavals of the Sixties—Malcolm’s and Martin’s assassinations; race rebellions in Newark, Watts, and Chicago—convinced me that I had to acknowledge who I was rather than try to blend into the dominant white culture.

So after years of hot combs and chemical straighteners applied with shame behind shuttered windows and closed doors in our all-white and sometimes welcoming neighborhood, I cut my hair into an Angela Davis afro. I embraced its texture and “otherness.” Since then I’ve sported large afros, Jheri-curled afros, close-cut afros, and now an all gray afro. Even today people’s reactions vary: they admire my hair or they stare at it and look away, or they reach out to touch it as if I’m the family pet. But for my daughters and me, all of us with natural hair now, Stokely Carmichael’s rallying cry still resonates: “I’m black and I’m proud.” Thank you, Faiza, for your honesty.

Your current issue [July/August 2017] carries a small story describing the termination of the Cayuga’s Waiters singing group by the University because of hazing in which some members participated. The Waiters have been an integral part of Cornell since my time as a student, and I had close friends among them. They entertained at events on and off campus, were regulars at reunions, and provided enormous pleasure to generations of Cornellians. The decision to terminate them is shrouded in secrecy and there has been no indication that the complained-of conduct occurred on University property, that anyone was injured, or that complaints were made by those involved. Voluntary associations are a critical part of American society at all levels, not least among college students, and they should be encouraged. The actions of the University in summarily, and without any evidence of due process, ejecting a student group because of activity that may not, by the current standards of some, be seen as “politically correct” is not only an affront to notions of fair play. It also shows a disregard of the powerful message sent by Cornell students in 1958, when they rose against the notion that the University was in loco parentis, with the right to monitor, censor, and control non-academic behavior. It is much to be regretted that Cornell now seems run by administrators who have lost what Carl Becker called its great tradition of freedom and responsibility.

As news spread of the selection of Martha Pollack as Cornell’s new president, most active alumni no doubt wondered who she is, what her background is, and where she is likely to lead Cornell. But for Jim Hanrahan ’79 and a handful of Cornellians from the Stamford, Connecticut, area, Pollack’s appointment was simply a matter of welcoming back a Rippowam High School classmate. Jim re-affirmed that friendship at a dinner hosted by Martha and her husband, Ken, at their Cayuga Heights home this past July. I had the pleasure of joining them.

Over dinner we shared our best memories of our Cornell years including, among others, the role of fraternities and sororities, our recollections of Frank Rhodes’s inauguration, and the thrill of Cornell hockey games. (We advised Martha to sneak in a raw fish for the Harvard game!)

Martha and Ken, welcome to Cornell!

SPEAK UP! CAM encourages letters and comments from readers on the magazine’s content. They may be edited for length, clarity, and civility. We are not able to publish and respond to all correspondence received. Send to: Editor, Cornell Alumni Magazine, 401 East State Street, Suite 301, Ithaca, NY 14850; jeb375@cornell.edu or submit a letter online.