Astrophysicist Ray Jayawardhana (right) has assumed the deanship of the College of Arts and Sciences. Jayawardhana, who began his five-year term on September 1, comes to the Hill from Toronto’s York University, where he served as dean of the Faculty of Science and a professor of physics and astronomy. An undergrad alum of Yale, Jayawardhana holds a PhD in astronomy from Harvard. In addition to his academic work—he has co-authored more than 125 scientific papers—he is a frequent commentator in the media and has written for such publications as the Economist, the New York Times, and the Wall Street Journal. His books include Strange New Worlds, which was the basis for a Canadian TV documentary. Jayawardhana succeeds Gretchen Ritter ’83, who has resumed teaching and research as a government professor after one term as dean. 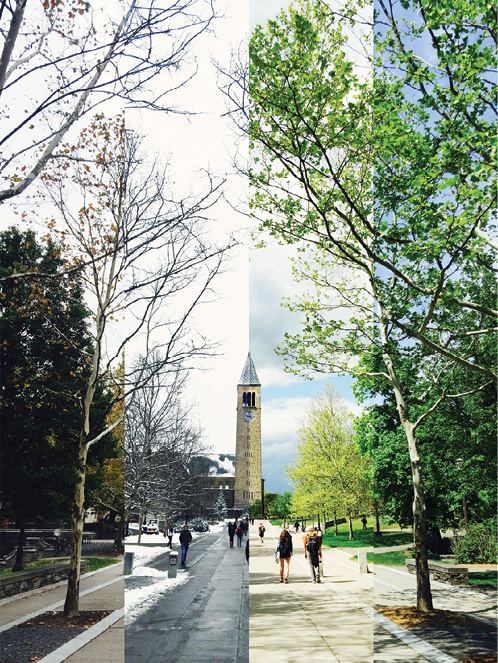 FOUR SEASONS: For the past few years, Shujie “Silvia” Li ’17 has designed a postcard to mark her friends’ Cornell graduations. Her 2018 creation was this image of McGraw Tower and Ho Plaza, captured throughout the year and spliced together. The CALS alum stayed on campus for 2017–18, taking courses and working in a lab, before starting grad school in biology at Duke this fall.

A task force charged with suggesting ways to enhance faculty diversity has issued its report. Convened in October 2017 by the provost, the committee was asked to build on efforts the University has made since the beginning of this decade, when it launched initiatives to step up recruitment of outstanding faculty and to increase the number of female and underrepresented minority faculty members. “At the end of the day,” says task force chair Mark Lewis, senior associate dean of diversity and faculty development in the College of Engineering, “we want to create a microcosm of the society we all want to live in, where all can flourish and succeed.”

Currently, of Cornell’s roughly 1,650 faculty members, about 8 percent are underrepresented minorities and about 33 percent are women. To increase those numbers as well as retain faculty from those groups, the task force made numerous recommendations. They include: creating an official university statement to formally connect Cornell’s motto of “Any person . . . any study” to its commitment to diversity and inclusion; requiring people seeking tenure-track faculty and senior leadership positions at Cornell to submit a “diversity and inclusion” statement as part of their application materials; identifying University initiatives likely to align with areas of expertise of diverse candidates, and supporting them with funding from the provost; and providing compensation for activities such as advising diverse students or serving on committees in need of diverse representation.

The full text of the report is available at provost.cornell.edu/academic-initiatives.

ILR and HumEc Merger Off the Table

A potential merger of ILR and Human Ecology—among the suggestions made last winter by a task force that had been charged with finding ways to strengthen social sciences at Cornell—has been shelved for the time being. “Because this idea does not have significant support and is unlikely to be pursued,” Provost Michael Kotlikoff (right) said in an e-mail to the University faculty in mid-July, “I have decided to set it aside while we focus on other ideas.” Following the task force’s report, both the Student Assembly and University Assembly passed resolutions opposing a merger, and a survey found that 88 percent of ILR faculty were against it. In March, the Daily Sun published a letter, signed by 163 current students of HumEc and ILR, calling a merger “a grave error and cruel abuse of administrative power” that would “wreak havoc on the lives of students and faculty associated with both colleges.”

In his e-mail, Kotlikoff said that another of the report’s suggestions that had been highly controversial—creating a new college devoted to the social sciences—would not be pursued, for similar reasons. “As with the idea of combining CHE and ILR, no faculty constituency arose that was strongly in favor of a college of social sciences,” he wrote, “and the sense of potential damage dominated the discussions.”

The Vet college has opened a new clinical facility, designed both to care for pets in the local community and to give students the experience of running their own practice. “We recognized there was a gap in the veterinary education,” says Lorin Warnick, PhD ’94, the college’s dean. “While our students were getting excellent training in specialty clinical skills, we also wanted to prepare them for the day-to-day challenges of running an independent general practice.” Located on Campus Road near the Companion Animal Hospital, the Small Animal Community Practice is a 10,000-square-foot building featuring five exam rooms, a treatment room, hospitalization space, and separate waiting areas for dogs and cats. In addition to offering routine care such as vaccinations and check-ups—performed by fourth-year students under the supervision of faculty and licensed vet techs—it conducts outpatient surgeries and does dental work. “We’re like your family veterinary hospital, where people bring their pets for most of the care that they need in their lives,” says Brian Collins, DVM ’94, the practice’s section chief. “We want to offer state-of-the-art care using the newest information technology and equipment, so that we can teach the students the gold standard whenever possible, but we want to do it in a very real setting with clients from the community.” 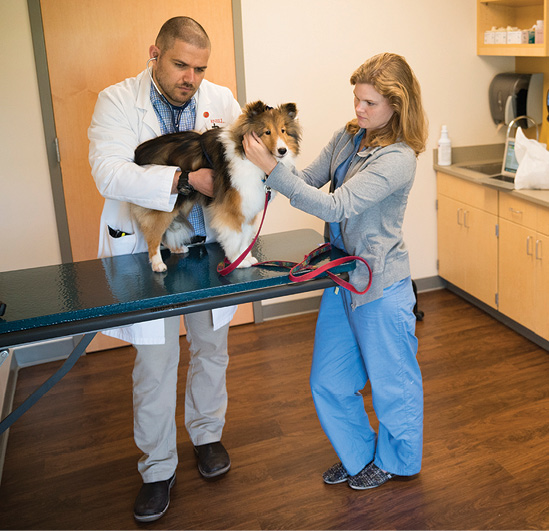 ‘In a country where many families do not support girls and their aspirations, we wanted to show that given the right opportunities, our girls can reach any summit.’

— Deeya Bajaj ’16, who climbed to the top of Mount Everest with her dad in May, becoming India’s first father-daughter pair to do so

After analyzing hundreds of exchanges between Wikipedia editors, information scientists have developed a computer program that can predict whether an online conversation will turn from civil to hostile—a tool that may help improve dialogue on the Internet.

Researchers are working to combat brown marmorated stink bugs, an invasive species from Asia that has bedeviled New York homeowners and crop growers in recent years. They’re studying the effectiveness of introducing Samurai wasps, which lay their own eggs inside the bugs’ eggs, killing the young.

Writing in the American Journal of Public Health, a Cornell postdoc says that the number of adult men killed by law enforcement officers may be twice as high as official statistics report—totaling an average of nearly three every day, accounting for 8 percent of all homicides in that demographic.

In a new book, government professor Sarah Kreps argues that a major reason why the wars in Iraq and Afghanistan have gone on so long is that they’re funded through debt rather than specific war taxes—distancing the public from the conflicts and lessening accountability.

John Boochever ’81, an executive at Atlas Research, and Yonn Kouh Rasmussen ’83, PhD ’89, a vice president at Xerox, who began their four-year terms as alumni-elected trustees on July 1.

AA&P Alum to Serve as College’s Next Dean

More than two decades after graduating from the College of Architecture, Art, and Planning, J. Meejin Yoon, BArch ’95 (left), will return as its dean. Currently head of the architecture department at MIT, where she has been on the faculty since 2001, Yoon begins her five-year term on January 1. In addition to conducting research on such topics as the role of technology in contemporary design culture, Yoon has an independent architecture practice with Eric Höweler, BArch ’94, MArch ’96; their current projects include the Memorial for Enslaved Laborers at the University of Virginia. Yoon, a former Fulbright fellow who holds a master’s in architecture from Harvard, succeeds Kent Kleinman, who was dean from 2008 to 2018. Professor of city and regional planning Kieran Donaghy, PhD ’87, has been serving in an interim capacity since July 1.

‘In my lab, we now pay more attention to how we refer to female scientists.’

— Psychology professor Melissa Ferguson, whose study found that, compared to women of equal status, male professionals are more than twice as likely to be referred to by only their last name—possibly contributing to gender bias by implying that the men are more prominent 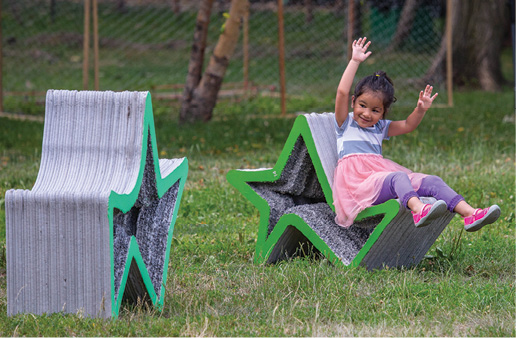 MUSICAL CHAIRS: A movable seating system designed by architecture professors Leslie Lok and Sasa Zivkovic was installed this summer at Socrates Sculpture Park in the NYC borough of Queens. Entitled RRRolling Stones, their creation—which consists of twenty-three seats made with a 3D-printed mixture of cement and nylon fiber—won an Architectural League of New York design competition.

A Human Ecology grad student team was recently among the winners of a contest for sustainable designs inspired by the natural world. What was their entry—an innovative mosquito-control device—based on?
(Use your mouse to reveal the correct answer.)

Enjoy the natural wonders of the Cornell Botanic Gardens? Now you can purchase some of that greenery for planting in your own yard, thanks to a new online store. The site is hosted by ShrubBucket, a Web-based purveyor of perennials, with a portion of each sale benefitting the Botanic Gardens. It has hundreds of offerings based on what’s grown at the East Hill oasis—including fruit trees, rhododendrons, hydrangeas, magnolias, herbs, ornamental grasses, and much more. Currently, ShrubBucket only delivers to about two dozen counties in central and downstate New York (plus Litchfield County, Connecticut), though it plans to expand.