A Cornell program puts students up among the leaves and branches

A Cornell program puts students up among the leaves and branches

The giant Sequoias on the western slopes of the Sierra Nevadas soar to heights of nearly 300 feet, their upper branches as tall as the Statue of Liberty's upraised arm. At that height, the tree's trunk measures just eight inches in diameter, a mere sliver of its twenty-five-foot span at ground level. The combination makes gathering seed cones for research and reforestation no mean feat. Imagine scaling a twenty-story building—then clambering about on balance beams mounted to the roof, an increasingly heavy harvest satchel swinging at your side.

Enter the Cornell Tree Climbing Institute, an offshoot of Cornell Outdoor Education (COE). Founded in 2004, the institute trains recreational climbers, arborists, and canopy scientists in safety, knot tying, ascent, and descent. For five years, instructors and students traveled to Costa Rica each spring for a week in the canopy; this June, they will visit a forest preserve owned by the University of California, Berkeley, for five days among the redwoods, collecting seed cones for the preserve's managers. "Getting up there and putting lines in the trees is a lot of work," says institute co-founder Dave Katz. "The seed collection is a nice tradeoff because once you're up there, it's like picking apples." 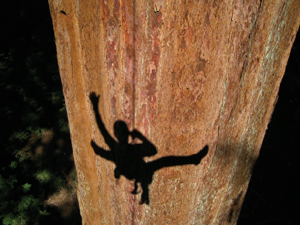 Technical climbing in the forest has little in common with the free-form trunk shinnying of school kids on summer holiday; there are ropes and carabiners, helmets and harnesses. Much of the gear— designed for rock climbing—had to be re-imagined for arboreal applications; while solo tree surgeons wielding chain-saws use much the same equipment, their techniques weren't quite right for a physical education course. When the institute was formed, says co-founder Mark Holton, PhD '99, "we were faced with assembling a set of protocols that would be reasonable for a group of ten undergraduates and three or four teachers."

Now COE's director of outdoor programs and risk management, Holton spent three years living in an unheated, off-grid tree house that he built in a friend's back field while earning his doctorate in chemistry and working part-time as a climbing instructor for COE. So when Katz, a fellow COE instructor, started campaigning for training on the hardwoods ubiquitous throughout central New York, Holton was the first person he approached. To develop the course, they partnered with sophomore engineer Keith Luscinski '07. "We'd heard that he was trying to teach himself to climb trees and inventing it as he went along," says Holton. "I had some experience because of my rock climbing— and because I climbed into a tree every night to go to bed." 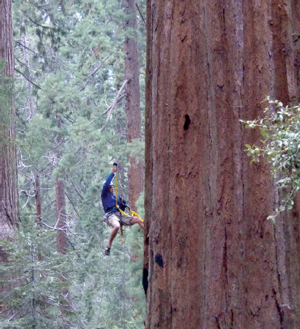 Together, they developed a curriculum that draws on the expertise of arborists, industrial rope professionals, and spelunkers. Katz, a native of nearby Trumansburg who travels the world as a nature photographer and freelance outdoor education instructor, says they were motivated by two priorities: safety and efficiency. "We spent hundreds of hours in the trees before the students arrived," he says, "figuring out where we would put them in the trees and how we would get them out in an emergency."

Typically, in an aerial rescue, a second person ascends to the stranded climber and extracts him from the tree in what can be an agonizingly slow process. Holton, Katz, and Luscinski wanted to simultaneously lower an entire class—in the case of animal attacks or sudden severe weather—without relying on expensive, heavy to haul backup ropes, or even the students' active participation. Their innovation, dubbed the "full-circle rig," uses a single knot to turn each climber's rope into a loop. Fed through a belay device near the ground, the loop allows for speedy rescue by an instructor on terra firma, even if the student is unconscious or incapacitated by fear. Thirteen short videos shot at Stewart Park and posted on a dedicated YouTube channel detail the rig, as well as the basic knots students use in the trees and tactics for accommodating those whose body shape or limited physical strength might constrain their climbing options. Using a telephone pole as a stand-in, Holton scales a length of trunk without branches from which to hang ropes. "[Our technique] is extremely slow, compared with the spikes and flip-line you'll see lumberjacks use, but it doesn't damage the tree," he explains as the camera rolls. "To reverse direction at any point, simply untie the backups and go right down to the ground."

If it weren't for the geography of the Finger Lakes, Katz might never have lobbied his COE colleagues to help climbers explore the canopy. Here, deep layers of crumbly shale make for spectacular gorges and cataracts—and treacherous rock climbing. Local rock aficionados content themselves with scampering up the Lind-seth Climbing Wall in Bartels Hall, or driving three hours east to the Hudson Valley's Shawangunk Ridge, affectionately known as the Gunks. But for instructors teaching climbing for physical education credit, the situation was a perennial frustration. "It was odd to be spending that quantity of time indoors when we have an environmental mission," says Holton. "We're Cornell Outdoor Education."