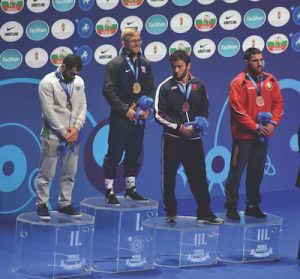 The most impressive thing about Kyle Dake ’13 taking gold at the 2018 United World Wrestling Championships in Budapest, Hungary, in October, wasn’t simply that he won—it was how he did it. In the finals of the 79 kilogram weight class, he defeated 2016 Olympic bronze medalist Jabrayil Hasanov of Azerbaijan 2-0. And the previous day, Dake had beaten grapplers from Russia, Germany, and Georgia by a combined 35-0 margin, making him the first U.S. man in more than three decades to win a world title without surrendering a single point.

The twenty-seven-year-old had already made his mark as arguably the most accomplished wrestler in NCAA history. In ninety years of Division I wrestling, only four men have won four national titles, and Dake is the only one to have done so without taking a redshirt year (in which promising athletes are kept out of official competition to develop skills and extend eligibility) as a freshman. Even more remarkable was his unprecedented feat of winning NCAA championships in four different weight classes—at 141 pounds in 2010, 149 pounds in 2011, 157 pounds in 2012, and 165 pounds in 2013. After he capped a two-season undefeated run by beating the reigning national champ for his final title, he won the Hodge Trophy as NCAA Wrestler of the Year.

During Cornell’s Sesquicentennial celebration four years ago, CAM convened a panel of experts to rank the finest athletes in University history. Dake was fourth, behind legendary hockey goalie Ken Dryden ’69, football star Ed Marinaro ’72, BS ’73, and Olympic hurdler Charles Moore ’51. Big Red wrestling coach Rob Koll, who has coached nine different NCAA champions since taking over Cornell’s program in 1993, believes that Dake’s four-weight-class feat puts him in contention as one of the greatest wrestlers in collegiate history. “As you grow, the physicality changes,” says Koll. “It’s not just that you’re at the same weight, wrestling the same guys, with the same technique and style. He went from wresting some really flexible, lean guys who are generally young, small, and quick to facing full-grown men.” 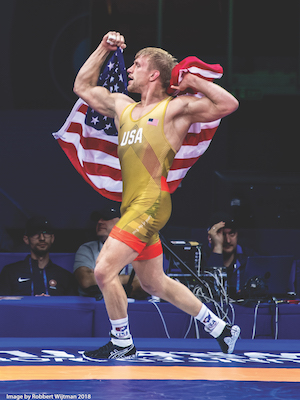 Dake celebrates after taking the title in Budapest in October.Robbert Wijtman

Adapting to new weight classes, however, evinced another of Dake’s great strengths: his ability to adjust on the mat, whether that means tweaking his own moves, recognizing how to react to moves that have worked against him, or adapting his style to his opponent’s. Although Dake may have evoked images of Superman or Captain America when he did a victory lap while sporting Old Glory like a cape following his world title win, Koll cheekily compares him to another comic book character: Lex Luthor. “He likes to win in the worst way. Kyle is the most competitive guy I’ve ever had on my team,” says Koll. “Some of these arch-villains, they’re much more manipulative in their pursuit of victory. And Kyle does it every single time he steps on the mat.” Dake laughs at the analogy, but he is serious about his mind-and-body preparation. “Every time I wrestle, I feel physically and mentally prepared for any situation that pops up,” he says. “A lot of that has to do with the training that I’ve been doing my entire life.”

His road to mythic status was basically a straight shot of ten miles—the distance from Lansing High School to Cornell’s Friedman Wrestling Center. Dake’s father, Doug, a former All-American wrestler at Kent State University, coached him to two state titles at Lansing, a program that was founded by Dake’s grandfather, Bob. And his great-grandfather, Merrills Dake ’26, was a star basketball player on the Hill, so Dake had a nature-and-nurture advantage. But it was his mother, Jodi, a former collegiate gymnast, who clarified her son’s competitive focus. When Dake moved into Cornell housing as a freshman, she left a red notebook on his desk and encouraged him to write down his goals. He did—twice a day, for four years. He started by writing “2010 141 lb. D1 National Champion” once in the morning and once at night. By the time he achieved his final goal—having written “2013 165 lb. D1 National Champion” four times each morning and night as a senior—the notebook contained nearly 3,000 lines of handwritten objectives. Dake’s teammates used to joke that he probably dreamed only about wrestling, and in those dreams he surely won every time. 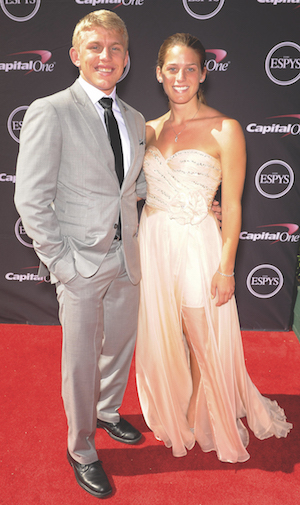 On the red carpet for the 2013 ESPY Awards with his future wife, Megan.Wenn Ltd/Alamy

Dake’s winning ways made him the rare collegiate wrestler who garnered mainstream attention. He has 143,000 Instagram followers, and when he teaches at wrestling camps, he has rock-star status. As Sports Illustrated put it five years ago, in profiling him as its male College Athlete of the Year: “In a sport of tough-minded grinders, Dake became a legend.” Having also been nominated for an ESPY Award in 2013, he walked ESPN’s red carpet with his now-wife, Megan, his high school sweetheart and a fellow athlete who played soccer at Ithaca College. This summer, Dake’s Instagram featured a photo of him at the U.S. Wrestling Foundation Gala in Los Angeles comically roughhousing with Chris Pratt, star of Marvel’s The Guardians of the Galaxy (and a competitive wrestler in high school). Since graduation, Dake has been able to focus full time on the sport, thanks to modest sponsorships from companies ranging from the Finger Lakes Wrestling Club to Milwaukee Tools to Cheribundi “recovery juice.” He even has his own memorabilia and clothing line through X-Athletic Apparel, where one can buy everything from autographed lithographs to “2018 Official Kyle Dake World Team Trials” singlets to T-shirts that say “Fly Air Dake.”

For all of Dake’s physical attributes, Koll says, “the psychological side of Kyle is what makes him most successful. He gets excited for matches, not nervous. And the difference in those two emotions is pretty significant.” Like many wrestlers, Dake is a creature of habit. In his college years, he followed a routine that gave him comfort and success: he’d wear the same wrestling clothes, go through the same warm-up in the same order, and insist on the same hard-as-possible hand slaps with his coaches. After graduation, however, Dake’s body appeared to be protesting the wrestling grind. He was an Academic All-American as a development sociology major in CALS, but he sounds positively pre-med when discussing his spate of injuries, which eventually led to three surgeries and many months of rehab: “I tore my Lisfranc in my foot, fractured my scapula, tore my rotator cuff, tore my labrum, tore my biceps tendon . . .”

Throughout, Dake managed to compete at a world-class level, but he was frustrated by his runner-up finishes at the U.S. Olympic and World Championship trials four times from 2013 to 2017—which meant that he wouldn’t be representing his country on the mat. “I thought I was good enough to win, regardless of injury. But I just fell short a handful of times,” he says. “Those were big frustrations, but they led me to the path that I’m currently on.” Dake—a man whom Koll once described as having an “unbelievable disdain for losing”—briefly considered calling it quits. Instead, he opted to reinvent himself. He realized that to achieve his ultimate goal—standing atop an Olympic podium—he first needed simply to start feeling better. He didn’t want to keep popping ibuprofen daily just to make it through workouts, so he chose to alter the workouts themselves—and thus the way his body responded. It was time for Kyle Dake 2.0. 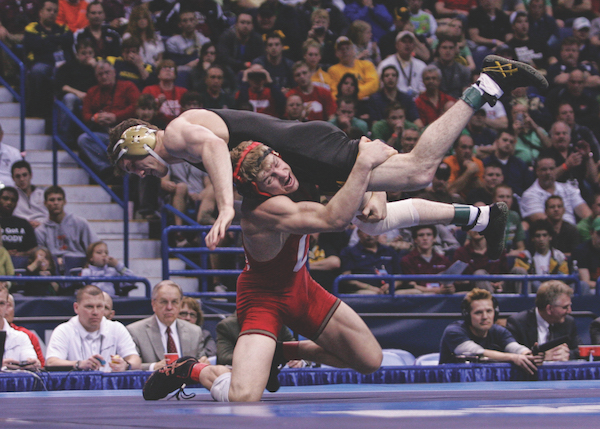 Dake at the NCAA championships in 2012.Lindsey Mechalik/Cornell Athletics

At the suggestion of his chiropractor, Dake adopted a training method called Functional Patterns—FP to its dedicated practitioners. Devised by a personal trainer, FP is rooted in the notion that oft-repeated dysfunctional patterns (such as a slumped posture from sitting in front of a computer monitor) cause the body to incorporate that dysfunction neuro-muscularly. The same is true, the thinking goes, for dysfunctional exercise—for instance, traditional abdominal crunches, which some believe can aggravate lower back problems. FP focuses on corrective exercises that replace imbalanced muscular patterns with more natural ones. It requires a deep dive—and embracing terms like “structural integration,” “multi-plane ballistic movement,” and “corrective static stretching.”

Dake works out three days a week with a personal trainer in Ithaca—a “Functional Patterns human biomechanical specialist”—trying to stimulate muscles and perform dynamic movements that replicate what he encounters on the wrestling mat. He still spends plenty of time in the wrestling room, training primarily with Koll (a former national champ himself at the University of North Carolina) and serving as a volunteer assistant coach for the Big Red. Thanks to the pain reduction as a result of FP, he says, “now I can train as hard as I possibly can. I can recover faster. I can focus more on my wrestling than on rehab or having to rest. I’ve never felt better in my entire life.” 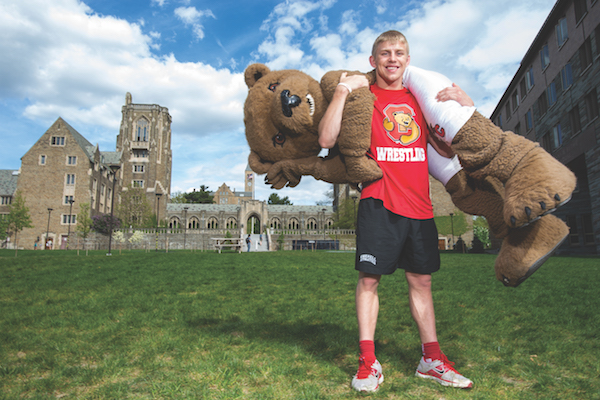 Dake describes FP as “looking at how the human body evolved, and the relationship between our bones, our joints, our muscles, and our nerves,” explaining that “understanding where we came from has played a big role in the things I try to do.” For instance, he wears blue-light-blocking eyeglasses indoors and has placed blue-light filters on his phone, on his computer, and throughout his house in Lansing. Why? Because artificial light can disrupt the body’s ancient circadian rhythm, and sleep enhances muscle repair. In addition, Dake—who now laments his collegiate menu of “Diet Mountain Dew, pizza, and a lot of sugar cookies”—works with his chiropractor/holistic healthcare practitioner to refine not only what he eats, but at what time of day and even what season of the year. A typical breakfast—always a big one—might consist of sardines, sauerkraut, natural yogurt, avocado, and a protein like grass-fed organic beef. After that, weather permitting, he might walk around barefoot in his backyard, because that’s how humans grounded themselves for millennia—literally, he says, absorbing electrons from the Earth. “A lot of it seems a little loopy,” he admits, “but I’m not going to leave any stone unturned in my pursuit of a gold medal.”

In that quest, Dake will have to adapt again. The 79 kilogram weight class that he dominated at the world championships—about 174 pounds—is not a category in the Olympics. So he may aim for 74 kilograms at the 2020 Olympic trials, requiring him to drop about nine pounds. But he has another big change in the offing: he and Megan, a CPA who works in Ithaca, are expecting their first child in mid-January, adding to a family that includes two golden retrievers. New fatherhood will make a full night’s sleep harder to come by—so perhaps it’s a good thing that Dake no longer feels the need to write down his goals every morning and night. “I know what my purpose is. I don’t need any reminders of what I’m doing. My whole day is wrapped around that,” he says. “Anywhere I look, I see what my objective is.”