When Troy Mullins ’09 walks up to a golf tee—with a bounce in her step, a wild mane of hair, and bright red lipstick framing a fairway-wide smile—she makes an entrance. But when she swings, she makes an impact. A really big one. 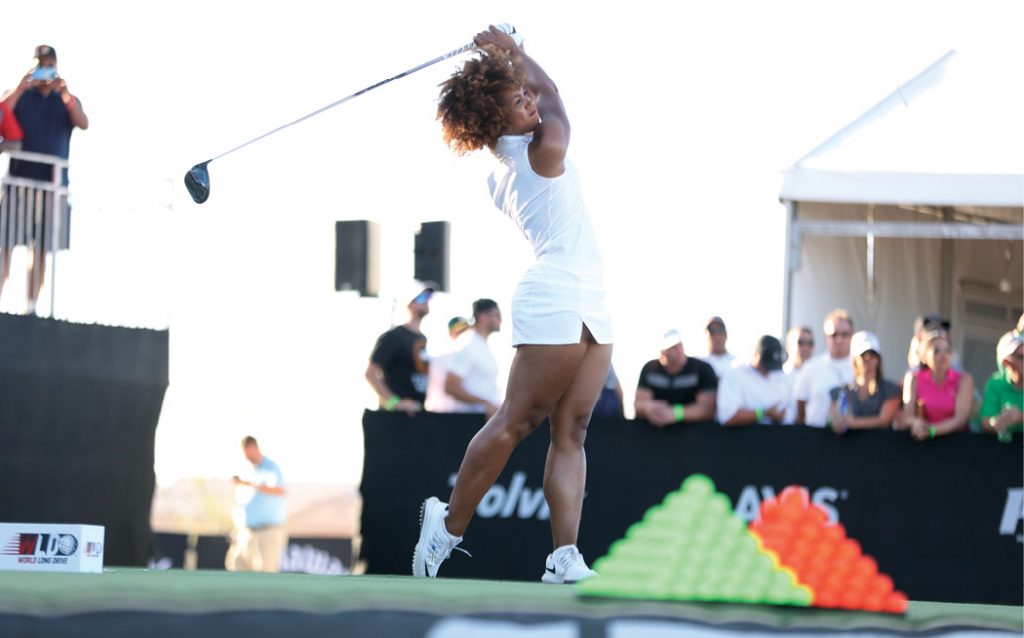 Mullins in action at a long drive event in Arizona in May. Cy Cyr/Golf Channel

Mullins is a professional World Long Drive competitor, which she describes as “the home run derby of golf.” In long drive competitions, which are frequently aired on the Golf Channel, participants aim at a measured-out grid that is generally thirty to fifty yards wide. Given the tremendous swing speeds required—hers has been clocked at 117 miles per hour, faster than the average male PGA pro—the margin for error is miniscule. A slight miss off the center of the clubface generally means a shot that misses the grid. The challenge is to hit it straight…and really far.

How far? The typical male weekend golfer hits a drive roughly 220 yards; the five-foot-eight Mullins routinely bombs it more than 300. While winning the 2017 Mile High Showdown in the thin air of Denver, she hit one drive 402 yards, setting a record for the longest drive by a female in competition. Of course, there are no trees or bunkers to worry about in long drive events, but Mullins has length on the traditional links, too. Last July, on a windy day at Sleepy Hollow Country Club in Briarcliff, New York, she unleashed a massive drive on a 475-yard hole, leaving her only seventy-six yards from the pin.

Remarkably, Mullins only took up the game in earnest a decade ago. An actress as a child (she appeared on a PBS show called “Kidsongs” as a ten-year-old), she competed in track and field during her first two years at Cornell—a heptathlete who inherited her speed from her father, a past record holder in the 400 meters. In a bid to stay active after her track career ended, she started visiting a driving range in her native Los Angeles the summer after her junior year. “It became a nightly ritual,” she recalls. “I would spend hours there by myself. I enjoyed that solo, introspective time, and I just fell in love with the game.”

A China and Asia-Pacific studies major on the Hill, Mullins spent her senior year at Peking University in Beijing. She brought along a used set of golf clubs and practiced her swing almost as much as her Mandarin. The search for the ideal interaction of club and ball appealed to her self-described addictive personality. “It’s just this perfect impact, and it’s such a soft feeling,” she says. “You can feel the ball melt into the clubface and then spring off.”

It turned out that her athleticism—particularly her lower body strength—was conducive to crushing the ball. Mullins became very good very quickly, even qualifying for the 2012 U.S. Mid-Amateur, the top event for post-collegians. On a whim just a week later, she entered an event called the RE/MAX World Long Drive Championship. The environment was a bit of a shock to her. “Everybody’s yelling and screaming, and there’s music blaring,” she says. “It’s definitely a show.” Mullins didn’t own any special equipment, just an off-the-rack driver. Still, she smashed a 321-yard drive and placed second. A long-drive career was born.

Now sponsored by PING golf clubs (as well as J. Lindeberg luxury golf apparel and Volvik golf balls), Mullins owns an armory of long-drive weapons—eight specially crafted, extra-long drivers. She practices daily and plays several rounds each week, perfecting a swing that has been described by two-time World Long Drive champion Art Sellinger as “science, not violence.” Mullins addresses the ball with a wide stance for balance (but not too wide) and a strong grip (but light enough to let her release the club through impact). She uses a full turn on her backswing, and her downswing focuses on hip rotation, a movement honed in her days as a shot putter on the Hill.

To maintain her athletic advantage, Mullins also exercises two or three hours each day—yoga, Pilates, spinning, and working on her core, glutes, and quadriceps. And to support her passion for the game, she runs her own academic tutoring business in L.A. Her dedication has made her a perennial contender in the women’s division of World Long Drive sanctioned events, as she competes from March through September in places ranging from Mesquite, Nevada (“Clash in the Canyon”), to Memphis, Tennessee (“Bluff City Shootout”). Until a rib injury led to a disappointing sixth-place finish at the season-ending 2018 Volvik World Long Drive Championship in September, she had been one of the four finalists in every 2018 event.

Mullins continues to aim high as well as long. An excellent all-around golfer—she generally shoots in the mid-seventies, often playing from the men’s tees—she has a long-term goal of playing on the LPGA Tour by succeeding in the qualifying tournament known as Q School. Meanwhile, her profile is rising. Mullins has accrued nearly 70,000 Instagram followers (@trojangoddess), has been featured in numerous golf magazines and on the Golf Channel, and has walked the red carpet at ESPN’s ESPY Awards. Last February she was invited to play in a pro-am event before the PGA’s Genesis Open tournament in L.A. That’s where she met her golf hero, Tiger Woods. “It was so surreal,” says Mullins. “He knew who I was!”

What both have in common (besides towering tee shots), of course, is that they are people of color in a sport that struggles with diversity. Mullins often finds herself the only woman on a golf course—and almost certainly the only African American woman. “What’s so cool about what I’ve been able to do,” she says, “is that so many people have told me, ‘I never even watched golf before, but you made me want to play.’ ”