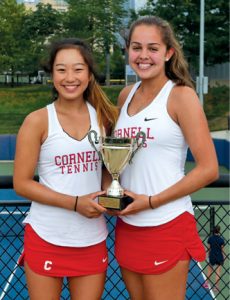 WOMEN’S TENNIS Maria Adiaconitei ’22 (right) and Valerie Ho ’22 (left) were runners-up in the top division of the Cissie Leary Invitational in Philadelphia. The duo notched a pair of single-set wins in the seven-team meet before losing 7-5 in the title match.

MEN’S ROWING Michael Grady ’19 (below) won gold as a member of the U.S. men’s eight boat at the 2018 U23 World Rowing Championship in Poland. With Grady in Seat 7, the rowers won their heat race by two seconds over runner-up England, then won the final by 2.5 seconds. Alex Bebb ’19 was in Seat 4 of the Canadian men’s eight that finished fifth in the final. 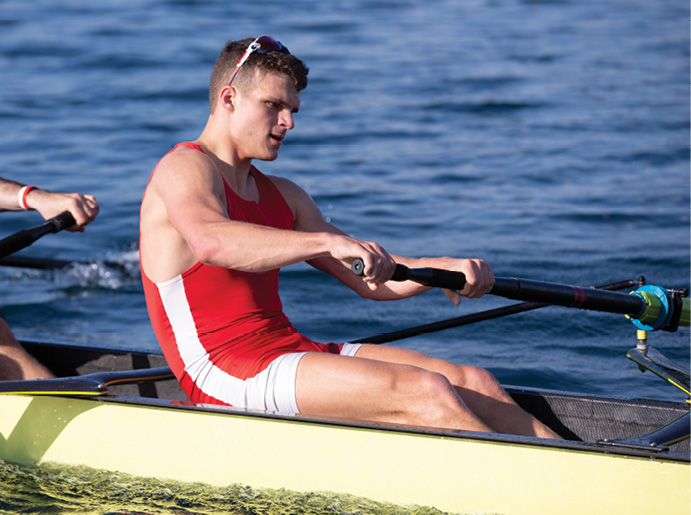 WOMEN’S TRACK AND FIELD Taylor Knibb ’20 won the International Triathlon Union Under-23 World Championship, held in Australia in September. Knibb completed the 1.5-kilometer swim, 38-kilometer bike ride, and 10-kilometer run in one hour, 53 minutes, and 47 seconds—nearly a minute and a half faster than the runner-up. A member of the Cornell cross country and track and field teams, Knibb won the junior world triathlon title in each of the previous two seasons and is just the third woman to win junior and U-23 world titles in consecutive years.

SAILING Cornell opened the 2018–19 season in impressive style, winning the Jack Boehringer ’52 Memorial Regatta on Cayuga Lake. The Big Red collected 57 points to win the title, well below runner-up Hobart and William Smith’s total of 71. Clark Uhl ’19 skippered the A Division winner with Adeline Sutton ’21 and Becca Jordan ’21 splitting crew duties as the boat won six of its 10 races. The pair of Sebby Turner ’20 and Kimberly Wong ’19 took first in the B Division on the strength of three race wins. 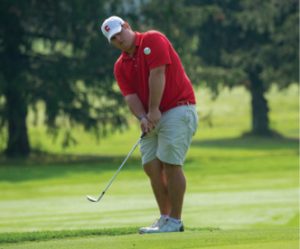 MEN’S GOLF Two strong rounds at the right time earned Jack Casler ’20 a spot in the country’s most prestigious amateur event, the U.S. Amateur Championship, held at Pebble Beach Golf Links and Spyglass Hill Golf Course. He had secured his spot by finishing second at a regional qualifying event, posting a two-round total of 141 (one under par). At the Amateur, Casler failed to advance out of the opening round. In other news, Christopher Troy ’18 (right) and Tianyi “Jack” Cen ’19 were honored as Srixon/Cleveland Golf All-America scholars by the Golf Coaches Association of America. Troy was second on the Big Red team and eighth in the Ivies overall, with a scoring average of 3.1 over par. Cen had a 4.4 over-par average and finished eighth at the Ivy Championship.

MEN’S LACROSSE Cornell was well represented at the 2018 Federation of International Lacrosse World Championship in Israel, with eight players and two administrators participating. Rob Pannell ’12, BS ’13 and Ben DeLuca ’98 came home with gold medals after Team USA beat Canada 9-8 in the title game. Pannell was named to the All-World team, while DeLuca was assistant general manager of the U.S. squad. CU players on Canada’s silver medalist team were Brennan Donville ’16, Jason Noble ’13, and Jeff Teat ’20, who led with 13 assists and scored eight goals. Max Seibald ’09 had 11 goals and two assists for seventh-place Israel while Howie Borkan ’81 served as the squad’s general manager. Mat Martinez ’11 was the starting goalie for Puerto Rico, which finished eighth, and Leif Paulson ’10 had 10 goals and one assist for 25th place Sweden.

ROWING In September, Tracy Eisser ’12 won gold at the 2018 World Rowing Championships in Bulgaria as a member of the U.S. women’s eight. In Seat 6, she helped the U.S. beat Canada in the finals by just over a second over the 2,000-meter course. In the men’s eight, Alex Karwoski ’12 just missed out on a medal as the U.S. team finished fourth, 0.17 seconds out of third place. Michael Colella ’16 finished 15th in the men’s pair for the U.S.