“As an entrepreneur, you do some really insane things,” says Jeannine Sacco ’09. “You make the impossible happen all the time.” A co-founder of Grainful, an Ithaca-based company that makes frozen entrees sold around the country, Sacco has her share of colorful war stories about sourcing ingredients and equipment. There was, for example, the time that she and Michael Crawford ’14, the firm’s operations manager, had to make a last-minute drive from Ithaca to Ohio to pick up 800 pounds of shredded cheese, then deliver it to their factory in Pennsylvania in time for an early morning production run. Or when Crawford and Grainful co-founder Jan Pajerski ’05 spent some twenty-seven hours on the road in a mad scramble to Tennessee and back, just to retrieve a giant industrial wrapping machine. 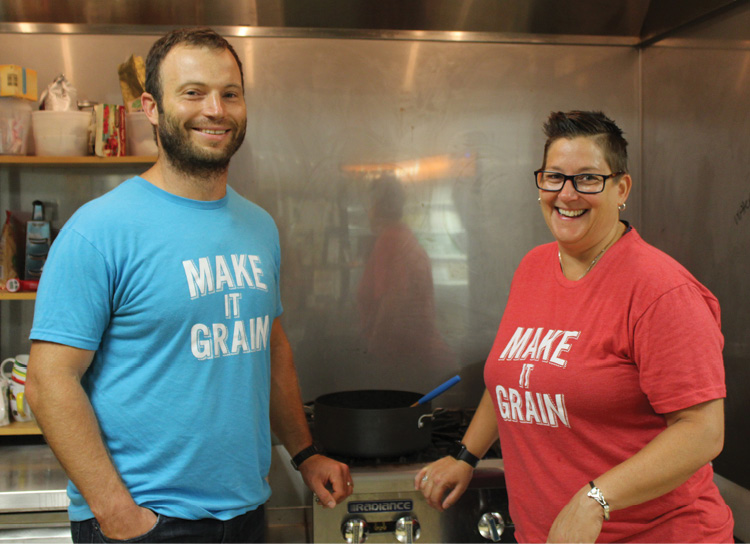 Pajerski (left) and Sacco in the company’s test kitchen on Ithaca’s South Hill.Provided 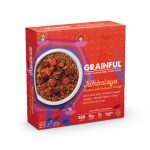 Then there was the episode—arguably the most memorable of all—when Sacco was transporting more than 1,000 pounds of Andouille sausage in an ice-packed industrial cooler, and her rented truck’s transmission blew on the New York State Thruway outside Rochester. Crawford came to her aid—but they accidentally drained his battery charging their phones, and his car died too. A towing service wound up hauling Sacco, the truck, and the sausage all the way to Pennsylvania, getting there in time to cook the jambalaya. “We’ve made a lot happen for these production runs,” says Sacco, a classically trained chef and Hotel alum, chatting with CAM in Grainful’s offices on Ithaca’s South Hill last summer. “It’s a lot of blood, sweat, and tears.” 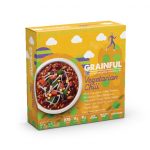 Headquartered in a business park near Ithaca College, Grainful sells entrees aimed at health-conscious consumers; their meals, priced around $4 to $5.50, can be found in the supermarket freezer case alongside competitors like Amy’s and Evol. Grainful’s wares are currently sold at about 2,000 retailers—including stores in major chains like Whole Foods, Safeway, ShopRite, and Vons—with plans to expand to more than 5,000 in 2019. (The company also has an online store and sells through Amazon, mainly to serve fans who can’t buy locally; given the high cost of shipping frozen food, which brings the entrees up to about $8 apiece, it’s not a primary business.) 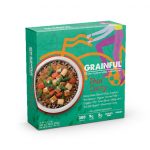 All of Grainful’s eight varieties are gluten free, with most featuring a blend of whole oats, sorghum, and red quinoa; many are low in sodium, and most only pack around 300 calories. Three of them—Thai curry with tofu, chana masala (an Indian dish with peas and garbanzos), and Tuscan bean and kale, Grainful’s top seller—are vegan, and one (three-bean chili with cheddar cheese) is vegetarian. In addition to the jambalaya, which contains pork sausage, there are three other meat dishes: chicken and mushrooms with parmesan cheese, chicken and black beans in a spicy ranchero sauce, and an “unstuffed” pepper with turkey. “The pillars for us are healthy, great-tasting, and convenient,” says Pajerski. “That’s what we want to provide.”

A former Big Red hockey defenseman from Ontario, Canada, Pajerski majored in mechanical engineering on the Hill. While he doesn’t have a culinary background, he says that he’s always been an enthusiastic eater. “I grew up in a house where everything was cooked from scratch,” Pajerski says. “And being an athlete, you get pretty in tune with the importance of food and nutrition.” At Grainful, he focuses on the business end, while Sacco is the culinary whiz. “Probably since I can remember, I was always cooking,” says Sacco, a Westchester County native. “Even in high school, I was a short-order cook.” She spent a decade working in restaurants, rising to sous chef, before earning an associate’s degree from the Culinary Institute of America (CIA) in New York’s Hudson Valley; when she heard about a joint program leading to a BS from the Hotel school, she was all in. “I thought if I could go to the CIA and Cornell,” she says, “those were the two best degrees you could get in this industry.”

She and Pajerski met when both were working (she as a student intern) for KensaGroup, an Ithaca-based start-up incubator headed by Tony Eisenhut ’88, who eventually became one of Grainful’s founding investors and its board chair. (The company has also gotten funding from Red Bear Angels, a Cornell-oriented investment group, and is seeking additional capital to fuel its expansion.) Among the first stores to sell Grainful’s products was P&C Fresh, an independent supermarket in East Hill Plaza; a big break came in spring 2014, when Wegmans agreed to stock its entrees in more than sixty stores. And in fall 2017, Grainful earned a coveted spot in the Chobani Incubator, a four-month program (offered by the yogurt company) that gives emerging food companies a grounding in topics like manufacturing, marketing, pricing, sales, nutrition, labeling, and food safety. “That’s been a huge help for us,” says Sacco.

Grainful hit a bump in the road early this summer, when—as part of a reformulation that included layering (rather than pre-mixing) the various ingredients in each entree, and switching from a tray to a bowl—its products temporarily went out of stock in many markets. The problem, Pajerski says, was that the new bowls tended to crack when frozen, prompting Grainful to voluntarily withdraw those packages from stores and find a new source for its containers. By late summer, with the issue resolved, Sacco was at work in the company’s test kitchen—shelves stacked with a kaleidoscope of spices, including exotic fare like ground lemongrass and truffle salt—to develop four new entrees, aimed to debut early next year. “I’m always playing around with different spices,” she says, adding: “Smoked paprika is my secret weapon.”

Grainful’s meals are made in a contract facility about 200 miles from Ithaca, at a USDA-approved food plant in northern Pennsylvania. Sacco and Crawford try to attend every production run—often toiling shoulder to shoulder with workers on the factory floor as they cook, portion, and package 15,000 to 25,000 entrees at a time, starting at 5 a.m. and going for eleven or twelve hours. “We’re really hands-on,” Sacco says. “We do quality control on a constant basis. Everything that comes off the line is tasted—every single batch.”