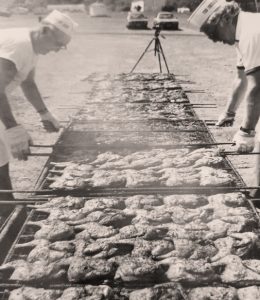 Baker (at right) and a fellow grill master demonstrate his method of turning multiple birds at once. Provided

In 1949, Robert Baker ’43 launched a food concession—dubbed Baker’s Chicken Coop—at the New York State Fair in Syracuse, grilling under a tent that was occasionally knocked over by a wandering pig. Over the next seven decades the seasonal eatery gained iconic status, serving nearly 1,000 half-chickens (a.k.a. “broilers”) a day for two weeks in late summer. Satisfied customers have included at least one U.S. president: Bill Clinton, who gave it a thumbs-up during a visit to the fair in 1999. What has drawn this flock of fans? A signature offering that the Washington Post once described as a “grilled chicken recipe so brilliant it’s got an Ivy League name.”

Cornell Chicken—a staple at backyard and community barbecues in New York and beyond—was the brainchild of Baker, a member of the American Poultry Hall of Fame who served as a professor of food science at Cornell from 1957 to 1989. Baker grew up on a fruit farm near Lake Ontario, majored in pomology (fruit science) on the Hill, then earned a master’s in marketing from Penn State and a PhD in food science from Purdue. When Baker joined the CALS faculty, he was tasked with aiding the state’s poultry farmers by increasing chicken consumption, which then lagged far behind beef and pork. Eventually, he transformed the industry nationwide by innovating dozens of foodstuffs including “turkey ham,” poultry hot dogs, and—most famously—the now-ubiquitous chicken nugget. But he was particularly proud of his early-career barbecue chicken recipe—which, despite the name, he actually developed during his time at Penn State. 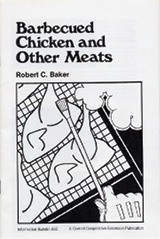 “Broilers barbecued over charcoal make good picnic food for a family or for several hundred persons.” So begins Cornell Cooperative Extension Information Bulletin 862—entitled “Barbecued Chicken and Other Meats” and first published in 1950. It offers Baker’s blueprint for grilling large quantities of moderately sized chickens, as a way to increase demand so farmers could sell more birds at affordable prices. Thus there were instructions, for instance, on building a fire pit and devising huge racks that let grill masters turn dozens of chicken halves at once.

The sauce recipe itself—“Barbecued broilers without sauce are like bread without butter,” Baker wrote—is a simple combination of vinegar, oil, poultry seasoning, salt, pepper, and an all-important egg (which keeps the mixture emulsified and helps the sauce cling to the chicken). “A lot of people think it’s marinated ahead of time, but it’s definitely not,” says one of his daughters, Reenie Baker Sandsted, who has operated the Chicken Coop at the state fair for decades. “The sauce goes on after the chicken has been cooking for a while. We think the skin absorbs it better.” Indeed, process is key: one must grill the chicken halves slowly over a charcoal fire, turning and basting them regularly for about an hour. If done right, the result is what Saveur called “one of the juiciest, most complex barbecued chickens we’ve ever tasted.”

Even with the fair poised to become yet another COVID-19 casualty—meaning no Chicken Coop this year—Cornell Chicken will be grilled and savored countless times throughout the region this summer. As one barbecue expert and bestselling cookbook author put it in a 2012 blog post (entitled “Crispy Grilled Cornell Chicken Will Have You Clucking With Joy”): “Every fundraising event, every fire department cookout, every Little League barbecue must serve this recipe, or nobody would come.” Appropriately, when Baker passed away in 2006 at age eighty-four, his famous recipe played a prominent role in helping his family celebrate his life. As Sandsted recalls, calling hours were immediately followed by “a great big barbecue chicken dinner.”

The barbecue sauce is a basting material. Brush it on the broiler halves every few minutes during cooking.

Beat the egg, then add the oil and beat again. Add other ingredients and stir. The recipe can be varied to suit individual tastes. Leftover sauce can be stored in a glass jar in the refrigerator for several weeks.

To barbecue: Place the broiler halves over the coals after the flame is gone. Turn them every five to ten minutes, depending on the heat. The chicken should be basted with a fiber brush at each turning. The basting should be light at first and heavy near the end of the cooking period. Cooking time is about one hour, depending on the amount of heat and the size of the broiler. Test the chicken to see whether it is done by pulling the wing away from the body. If the meat in this area splits easily and there is no red color in the joint, the chicken is done.