The lights come up in a CALS lecture hall, and plant science professor Carlyn Buckler opens up discussion about the video she has just screened—roughly forty minutes of a recent Netflix documentary. Entitled Grass Is Greener, the film explores the cultural and legal history of marijuana in the U.S., particularly the way in which twentieth-century interdiction policy was driven by animus against—and fear of—African Americans and Latinos. “Back in my day, it was so blatantly obvious that it was about racism,” Buckler tells her students. “Believe it or not, it’s gotten a lot better—but we aren’t there yet.” 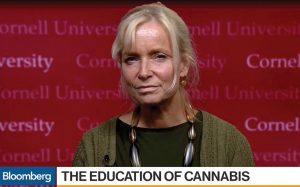 The conversation continues, numerous students raising their hands and contributing comments. “It’s ridiculous,” says one young woman, “because you see people dying from DUIs all the time, but alcohol is an accepted part of college culture.” Buckler replies: “I agree with you totally, and that is a common argument. The rebuttal is that if alcohol came on the market today, it would never be legalized, because we know what the dele­terious things are. But we still know next to nothing about THC [the chemical behind marijuana’s psychoactive properties]. We have no idea what the long-term effects are, especially to young folks whose brains are still developing.”

It’s a lively discussion that continues until time is up—but that’s typical for classes on the Hill. A visitor to this Riley-Robb lecture hall wouldn’t necessarily realize that this course—Plant Sciences 4190—is so unusual that it has made headlines nationwide. Granted, some of that virtual ink has tended toward the sensational: “An Ivy League Education in Weed,” said one news site; “Bachelors of Marijuana Science” declared another. 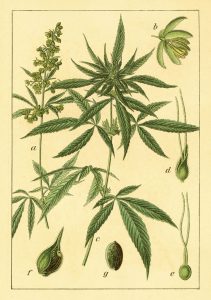 A botanical illustration of Cannabis sativaNicoolay/iStock

Formally called “Cannabis: Biology, Society, and Industry,” the course is believed to be the only one of its kind in the U.S. As Buckler notes, others cover some aspect of Cannabis sativa—the plant that produces not only marijuana but hemp (an industrial crop used to make textiles and many other products) and cannabidiol (CBD), a compound that has exploded in popularity in recent years as a treatment for anxiety, depression, pain, and more. But Buckler’s class aims to cover cannabis comprehensively, from biology and breeding to legislation and culture to the plant’s recreational, religious, medical, psychiatric, and veterinary uses. “It’s all encompassing,” says Conor Stephen, a first-year master’s student in horticultural biology who’s taking the course and ultimately plans to work in the cannabis industry in his native California. “I think a lot of ideas will come out of this class and get people motivated to look deeper at this plant, which has been so stigmatized.”

While marijuana remains illegal under U.S. law, more than thirty states have decriminalized it for medical and/or recreational use; federal legislation (including the 2018 Farm Bill) has loosened restrictions on hemp cultivation, provided that the plants contain no more than 0.3 percent of THC and therefore can’t cause a “high.” Those factors, along with the rise of CBD—which is generally legal, with some restrictions and jurisdictional issues—has the cannabis industry overall poised to see major growth. “If Cornell University, which has one of the top plant science research facilities in the world, is not doing something to educate the next generation of people going into this industry, who is?” asks Buckler, who estimates that 90 percent of the students in her class are contemplating cannabis-related professions of some kind. “It has to be us.”

A three-credit course, Plant Sciences 4190 is open to undergrads and grad students from throughout the University, with the prerequisite that they’ve taken college-level introductory biology. Its guest speakers include academics from the Hill and elsewhere—such as horticulture professor Larry Smart ’87, who heads the University’s hemp research program—as well as an attorney specializing in cannabis law; numerous industry entrepreneurs; and a Brookings Institution scholar who studies cannabis economics and policy. Buckler capped enrollment at seventy, aiming to encourage questions and foster open discourse. “In most college classes, extensive textbooks have been written on the subject you’re studying, and you’re given a world of information,” observes Josephine Davis ’20, an ILR student from Washington, DC. “But with this course, it feels like we’re all sort of learning as we go, because there’s so little research. Even though we have reputable information provided to us by speakers, there are so many things we don’t know. I love that the course is different in that way.”

The dearth of research on cannabis—owing to the fact that the plant has effectively been illegal in the U.S. for the better part of a century—is a point that Buckler constantly stresses. “It has been around for human consumption for at least 8,000 years,” she says, “but we know next to nothing about it.” By way of analogy, she cites a certain snack food. “If you want to go into the potato chip industry, you can, because we know the biology, the genetics, the soil science of potatoes,” she says. “There are no legal or policy issues. We know what the consumer wants. You can go out tomorrow and get all the machinery to take it from the potato to a perfect chip. But none of that is true for the cannabis industry, because it’s so new.”

When second-year MBA student Diana Ciechorska started at the Johnson School, she made a list of major industries that were quickly evolving; it included artificial intelligence, cryptocurrency—and cannabis. “I did some research, and it was really fascinating,” she says. “I thought there was a compelling opportunity there.” Ciechorska went on to co-found a “cannabusiness” student group on the Hill, which is open to all and has 150 people on its e-mail list; last summer, she interned at a cannabis-focused investment fund. When she heard about Buckler’s course, she jumped at it. “She has given a great overview of what’s happening in the industry,” Ciechorska says. “I also really appreciate that she’s serious about saying what has and hasn’t been proven. She pushes back when students are like, ‘Recreational marijuana is great.’ She says, ‘These are the facts; this is what we know.’ We’re talking about this academically, not just socially. That’s really important.”

The course’s guest lecturers include one who’ll be featured at two class sessions in mid-November: cannabis entrepreneur Adam Berk ’01. The Hotel alum is CEO of Stem Holdings, a vertically integrated (and publicly traded) firm that sells both THC- and CBD-containing products. Berk, whose company is a collaborator on Smart’s hemp trials, notes that in addition to the dearth of research is an enormous need for expertise across the industry. “I love that Cornell is being a pioneer; as an alum, it makes me proud,” he says. “There’s so much to teach the students—but at the same time, this is a new industry, and we are at the forefront of shaping it. Bringing in great minds from Cornell is going to be very important. There’s a lack of good, qualified people—and as the industry continues to expand so rapidly, the barrier really is human capital. This course is a great start; there’s already so much buzz around it. But to use a baseball analogy, we’re still not even in the first inning—we’re in spring training. It’s such early days.”