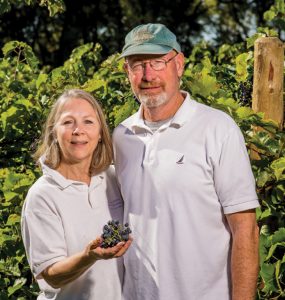 Ask Fred Johnson Jr. ’75, MBA ’77, when his forebears started making wine on their land in Western New York, and he’ll reply with a grin and a bit of family lore. “Fermentation began on the first day of Prohibition,” he says, clearly relishing an oft-told tale. “My grandfather was an orphaned English immigrant. He didn’t think much of this Prohibition business, so he started making wine in the basement. His wife, my grandmother, was a pillar of the Episcopal church and a devout Women’s Christian Temperance Union person. I guess they agreed to disagree.”

Back then, the land was mainly an apple farm, and his grandfather—Frederick Johnson 1901—would harvest grapes from the vines that had been growing on the property since the mid-1800s, crush them in his cider press, and make wine on the sly. Today, that antique press stands outside the tasting room and production facility of Johnson Estate Winery, a third-generation, 110-acre operation that sells a half-million bottles a year. Located in Westfield and now run by Fred and his wife (Jennifer Schroeder Johnson, MBA ’79), it’s New York’s oldest continuously operating estate winery. That means that the winery grows its own grapes, which Fred says has inherent benefits for the ensuing libation. “If I own the grapes and sell them to the winery, my interest is in having as big a crop as I can get,” Fred explains, giving CAM a tour of the vineyard on a picture-perfect August day. “But if I own the winery and the grapes, I know that if I can get one more dollar per bottle, I can afford to double my costs in the vineyard. So now my bread is buttered on the quality side of the business model—whereas, when it’s split, one guy’s got a cost-quality tradeoff going the wrong way.”

A member of Lake Erie Wine Country (formerly the Chautauqua-Lake Erie Wine Trail, of which Jennifer is a past president), Johnson Estate sells about a fifth of its bottles via the tasting room, housed in a former apple storage facility built in 1920; the rest is mainly sold in liquor stores in New York, Pennsylvania, and Ohio. (The winery can also ship to thirty-four U.S. states.) Its wines have garnered numerous awards, including a dozen double-gold medals at regional and international competitions. Wine Enthusiast called its 2013 Sparkling Traminette (whose currently available vintage costs $19.49) “buoyantly aromatic,” noting that it “stands out in a lineup of traditional Champagne-style sparklers.” One of its top sellers—Founders’ Red ($15.49), whose Chancellor grapes are hot-pressed to mellow out the tannins—was named a “best buy” by tastings.com, which praised it as “an instantly appealing Chancellor that offers gobs of creamy oak flavor and luscious fruits.”

While the winemaking tradition goes back to Fred’s bootlegger grandpa—who bought the farmhouse and land in the early 1900s—the operation began in earnest in the early Sixties, when his father, Frederick Johnson ’43, BS ’46, replaced the apple trees with grape vines and turned the storehouse into a winery. “He was mostly making bulk wine for the two or three big wineries in the Finger Lakes,” Fred says, “but slowly, he developed his own brand.” Johnson Estate now sells some forty wines including reds, whites, blushes, sparkling wines, and some specialty items such as cherry and maple liqueurs, cream sherry, and ruby port. The winery is particularly known for making ice wine, which requires the grapes to be harvested in deep winter and processed while still frozen. “We are a fully integrated-production estate or chateau winery, which starts from growing high-quality grapes and then producing high-quality wines,” says Jennifer. “We have a winemaker who is sensitive to that and is part of our planning team when we decide what to plant, because he’s aware of the strengths of the region and its microclimate.”

Fred’s experience in grape-growing stretches back to childhood; as a middle schooler, he was expected to help with the harvest every day after school. “My job was picking up forty pound crates of grapes and putting them on the wagon,” he recalls, then adds with a laugh: “I say that I got into college because of the grapes. Even though I was a scrawny kid, I had muscles in the right place to be a rower.” (He’d go on to become captain of the Andover men’s team and row for the Big Red.) After Fred’s father passed away in 1998, he and his siblings (Elizabeth Johnson ’76 and Anthony Johnson ’80) inherited the winery; Fred and Jennifer became the sole owners in 2010. For them, running Johnson Estate is a second career: he worked for a variety of international food companies over the decades, while she started off in finance and later got a master’s in historic preservation. “It’s kind of the perfect retirement,” says Fred. “I’m not at the whim of some board of directors or boss. I like being outside and poking around and making projects.” While Fred runs the business end, Jennifer’s many responsibilities include managing its website and social media. “I laughingly say I’m chief of hospitality, chief gardener, and chief laundry lady,” she says. “In some ways I look at myself as a curator. We want our tasting room and gardens to reflect that we’re serious about making good quality wine—everything from what kind of napkins to use to how the displays are set up to keeping the gravel parking lot tidy.” 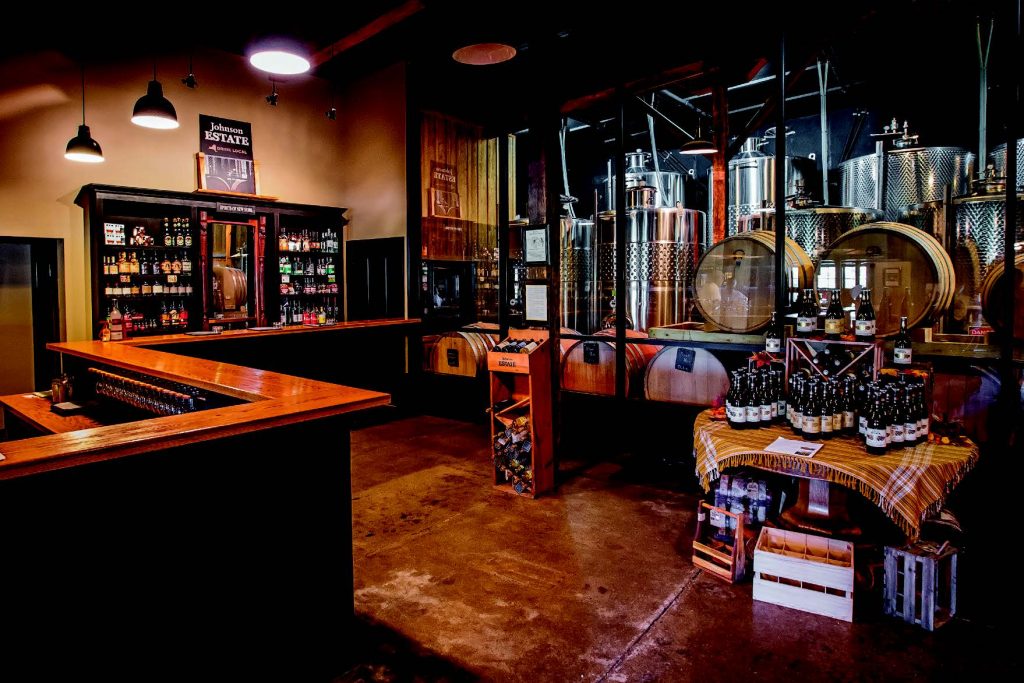 The winery’s tasting room in a former apple storehouse is separated from the production facility by a glass wall.Matt Kleck

After many years of following Fred’s career around the globe, the couple settled into the property’s restored 1820 farmhouse—which has sweeping views of the vineyard—full time in 2013. “We’ve now lived here longer than we’ve continuously lived anyplace,” Fred observes. “We’ve been married thirty-seven years and moved fourteen times. Our son was born in Australia, our daughter was born in Canada, and they both learned Spanish on a banana plantation in Panama.” And while their children would represent the winery’s fourth generation, they’re pursuing other careers—their daughter as a consultant and their son (Frederick Johnson III ’10) as a special operations officer in the U.S. Navy. “The family rule,” says Fred, “is you have to go out and make your own way for at least twenty years before you’re qualified to make the decision as to whether you want to come back here.”