Wise is the University’s full-time glassblower. When he arrived on the Hill two decades ago, the glassmaking shop—located in the basement of Olin Chemistry Research Wing, Room B-66—was a two-man operation; now it’s just Wise. A tall, burly fellow who spent nineteen years at Corning Glass, Wise could pass for a bouncer when he dons his dark safety glasses, but he’s disarmingly soft spoken. “I was lucky to get this job,” he says. “Corning was starting to outsource and I saw the writing on the wall. I’d worked my way up from crating glass to making one-of-a-kind glassware. When I left, the company had 400 glassblowers on the floor. Today, none.” 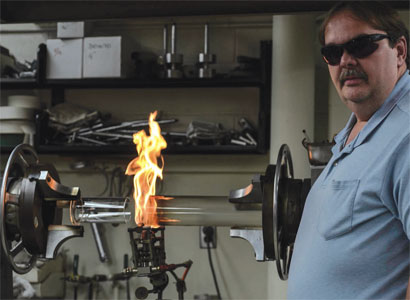 Clear vision: David Wise is the University’s only full-time glassblower.PHOTOS BY FRANKLIN CRAWFORD

At Cornell, researchers seek his services for a variety of projects. But mostly, Wise makes vacuum tubing for chemists and biologists. He also does glasswork for materials science, food science, physics, and, occasionally, textiles. One surprise assignment came from the theatre department: design an elaborate Victorian laboratory with large test tubes, flasks, beakers, and more. (The play, naturally, was Frankenstein.)

That Cornell employs a dedicated glassblower may seem a bit of a throwback. And in some ways, it is. While it’s still standard for a top research university to have its own dedicated glass shop, more and more researchers are ordering their glass online—but they can’t fix it when it’s broken. That’s when Wise gets a knock on his door. “He’s a genuine artisan,” says David Collum ’77, newly appointed chair of chemistry. “I don’t know how we’d run our vacuum lines— our experiments—without him. He’s fixing them all the time.” The value of having someone like Wise on staff is underscored one June afternoon when a professor stops by with a concept for a simple device he needs quickly. He sketches the design and hands it to Wise, who looks it over. “No problem,” Wise says, after they exchange some technical questions. “I can throw that together and have it for you first thing Monday morning.” It’s closing time on a Thursday. Now that’s good service. 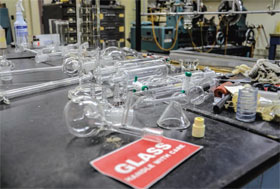 His Olin lab.PHOTOS BY FRANKLIN CRAWFORD

Much of Wise’s work is done on a machine called a glass lathe. Equipped with torches at either end and a set of jets in the center, it allows him to join tubes or cylinders, one clamped at each end. As flames throw menacing shapes and figures around the glasswork, Wise manipulates the piece with what looks like a common spatula. He may seem nonchalant around the searing flames, but every move is nuanced and cautious. Later, he fires up a fixed torch on his workbench and puts the finishing touches on a piece of tubing that looks like a baby bottle. Large billows of flame roar as they encircle the vessel, a mesmerizing sight. The piece is then placed in an annealing oven to cool overnight. In the morning Wise will check for weaknesses in the piece using a special light; a frailty shows up as a cloudy area.

These days, one of Wise’s favorite activities is leading a mentoring program in glassblowing sponsored by the chemistry department, open to all Cornell students. Not many sign up, though—and many who do don’t stick with it. “They find out that it’s not all that easy,” he says. “After a while, they lose interest.” Reflecting on the lack of apprentice glassblowers, both Wise and Collum joke about one area in which glassmaking is a growth industry: in downtown Ithaca, numerous storefronts are lined with intricately designed hookahs, bongs, and other paraphernalia, selling for as much as $3,000 apiece.