For Tobe Levin, PhD ’79, a magazine article sparked a lifetime of activism. Then twenty-nine and living in Germany, Levin gazed, simultaneously transfixed and appalled, at a feature story entitled “Klitoris­beschneidung.”

It was 1977, and clitori­dectomy—the traditional removal of all or part of the outer female genitalia widely practiced as a tribal, cultural, or religious ritual in regions of Africa, Asia, and the Middle East—was just becoming known in the Western world. The concept made Levin’s head spin. Though she’d been reading about feminist issues for several years, after learning about the practice—now commonly called female genital mutilation (FGM), but also known as female genital cutting or circumcision—she felt a call to action. “The most I had done before this was to join groups agitating for abortion rights. I was a paper participant,” says Levin. “This issue said to me, ‘If you’re ever going to do anything, you’d better act on this.'” 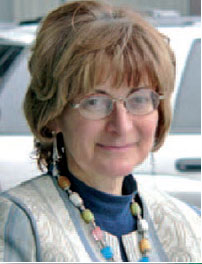 As the women’s rights movement grew in the mid-Seventies, Europe was learning about FGM from African women with stories to tell. The article Levin had read in a German feminist magazine generated so much reader mail that an editor was hired just to cope with the influx. In Germany, Levin joined a letter-writing campaign entreating UNICEF to designate FGM a human rights abuse. Already fluent in Spanish and French, Levin gained proficiency in German by translating articles about FGM, giving speeches, and eventually reporting stories on the subject for German-language publications. “My German was terrible,” Levin remembers. “But I thought, This topic is too important for me to worry about perfect grammar.”

Today, Levin is the founder of a small press devoted to publishing works that address FGM, a topic rarely mentioned in English-language publications. Even many feminists, she says, “don’t want to face the horrible, horrible truth.” The facts are indeed sobering: the WHO estimates that 140 million women and girls have undergone the procedure, which was deemed a violation at the 1993 World Conference on Human Rights. Levin started the press, called UnCut/Voices, in the hope of making Americans as aware of FGM as Europeans are. “In Germany, France, and Italy books were being published that were not translated into English,” she says. “No English publisher wanted them.” The press, she says, “is for those who are not interested in practicing feminism lite.” 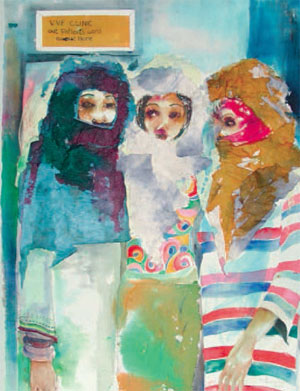 The exhibit included this oil painting, Queue.PROVIDED BY TOBE LEVIN

UnCut/Voices’ first release was Blood Stains—a memoir of FGM, arranged marriage, and spousal abuse written by a young Senegalese woman named Khady Köita. “It had already been translated into seventeen languages before I could get it into English,” says Levin, who published Köita’s book in 2010. (Its admirers include scholar Henry Louis Gates Jr., who called it “wrenching and necessary reading.”) Since then, UnCut/Voices has released two more titles including a play, Waafrika, about two women falling in love in rural Kenya in 1992. At the press, Levin wears many hats: editor, translator, author, and—above all—activist.

After a traditional suburban childhood in New Jersey in the Fifties, Levin earned a BA in English from Ithaca College, then an MA in French from New York University in Paris, followed by studies at the Sorbonne and a PhD in comparative literature from Cornell. (Levin also answers to the name “Freifrau von Gleichen”; in Germany, she’s a baroness by marriage.) In addition to the press, she splits her professional time among teaching language and women’s studies at the University of Maryland University College’s study program in Europe, at Goethe University in Frankfurt, and at Harvard.

Through three decades of reporting, translating, and speaking out against FGM, Levin has grappled—as have many activists—with a conundrum: when does a cultural ritual become a breach of human dignity? Who is entitled to make such a determination? “Many felt restrained by these kinds of concerns,” says Levin. “Anthropologists called it an act of love.” But after giving birth to a daughter in 1987, Levin gained an enhanced perspective on the practice. “You can’t imagine putting your daughter through that—but so many mothers do,” says Levin. “To me, it’s an act of cruelty that at the same time is coerced and regretted, and it’s a human rights abuse of the highest magnitude.”