Huck, MS ’06, seems like an honest sort of fellow. So it’s entirely possible that he means what he says—even if legions of cone-loving Cornellians would respectfully disagree. 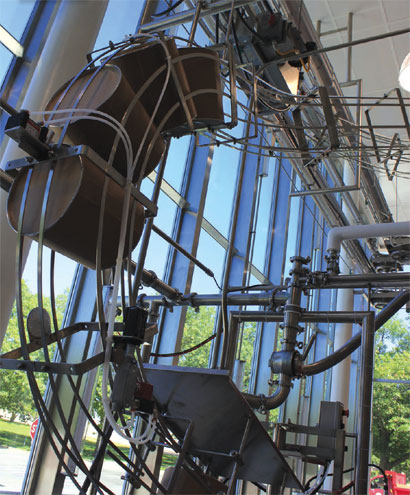 For the past two and a half years, Huck has had the unenviable job of explaining why Cornell Dairy fans have had to live without their beloved butter pecan, mint chip, Sticky Bunz, and Cornellia’s Dark Secret—but on the bright side, he’s been establishing a state-of-the-art dairy processing operation. As part of its $106 million overhaul of Stocking Hall, CALS demolished the old plant (in operation since 1923) and built a gleaming new facility. With a long glass wall facing Tower Road—it glows bright cobalt by night—the new, computer-controlled plant offers multiple vantage points for the lactically curious. While the plant itself is off-limits to the public for food safety reasons, a viewing gallery looks down on the main floor, home to giant steel tanks, filling machines, a pasteurizer, a homogenizer, and other gleaming equipment. “Once we get running, it’ll be a little like a reality TV show about dairy processing,” Huck says. “We’ll be on display all the time.”

The 12,000-square-foot plant also includes a dry-storage room redolent with the aroma of 2,500 pounds of cocoa powder—and if you’ve ever wondered what 22,000 pounds of sugar looks like, here’s your answer. There’s a dedicated yogurt room; a “batching room” with a 200-gallon industrial blender; a Willa Wonka-style conveyor belt that takes jugs, cartons, and tubs on two-story thrill rides, from empty to full to chilled. A room-sized blast freezer prevents the formation of ice crystals by bringing finished ice cream down to an Arctic minus-35 degrees.

Construction on the plant was completed early this fall—work on other parts of Stocking Hall will continue into 2014—and since then Huck and his staff have given the facility a thorough cleaning, tested the equipment, and ramped up production. By the end of the semester, University-made products like chocolate milk, yogurt, cider, and—yes—ice cream will have returned to the shelves of the renovated Dairy Store, now under the aegis of Cornell Dining.

Eventually, fiberglass mascots Cornell­ia and Cal will go back on display. Past victims of cow-napping, they will reside in what Huck cagily describes as a “secure area.” But even without them, the new plant and store are cheerily cow-themed, with large black and white spots figuring prominently into the décor. And look closely: if you stare at them just right, you’ll find a hidden herd of bovine faces.