In the sci-fi classic Alien, among the chief complaints of the crew on a deep space mission—besides the fact that a man-eating monster is killing them one by one—is the terrible food. By contrast, in a sunnier version of space exploration—the good ship Enterprise—any cuisine can be summoned instantly. Captain Jean-Luc Picard, as “Star Trek: The Next Generation” fans know, is particularly fond of “tea, Earl Grey, hot.”

For more than a decade, biological and environmental engineering professor Jean Hunter has been studying how to supply real-life space travelers with meals that are tasty, practical, and even nurturing. This year, she and a colleague from the University of Hawaii oversaw a four-month experiment in which six volunteers were sequestered in a simulated Martian base on the slopes of the Mauna Loa volcano. From April to August, in addition to conducting a variety of scientific studies, they subsisted on meals made from shelf-stable ingredients. The experiment allowed Hunter to explore such factors as resource use, menu fatigue, and the benefits of home cooking—even millions of miles from home. 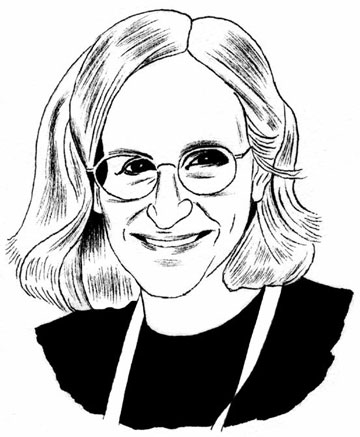 Cornell Alumni Magazine: Do you expect that astronauts on long-term missions will bring all their food, or will they grow it en route?

Jean Hunter: We’re interested in three possible strategies. There’s prepackaged food, which is what astronauts now eat. There’s what I like to call the nineteenth-century explorer approach, which is what guys like Amundsen and Shackleton did; they brought shelf-stable foods and had a chef to prepare meals or the crew cooked for themselves. And the third is the Polynesian voyagers’ approach. They were the long-term space travelers of their day, because they set out for places where they weren’t sure of having much to eat; they brought their crops with them and when they arrived at new islands they set down roots, literally. The space-age counterpart is a bioregenerative life support system, where plants purify your air and water and provide your food. Those three schemes form the points of a triangle, and any food system will be found somewhere in the middle of it. The ideal blend of foods will depend on what sort of mission you’re on, where you’re going, how long you’re staying, and how many people are in your crew.

CAM: For your Hawaii experiment, what was on the menu?

JH: They had freeze-dried or canned meat and seafood, freeze-dried and dehydrated vegetables, freeze-dried fruits, textured vegetable protein, oil, loads of baking supplies, freeze-dried cheese, Velveeta, shelf-stable salami and pepperoni, precooked bacon, crystallized eggs, coffee and tea, powdered beverages like lemonade and Tang. There were also some unfamiliar Asian foods, because on a long voyage you need to kick in some novelty from time to time. And hot sauce—essential.

CAM: Were they allowed to prepare the foods however they wanted?

JH: We had them on a four-day cycle, and for two of those days they weren’t permitted to cook. They could rehydrate things, so we gave them a lot of backpacking foods. Instead of bread, they had tortillas. On a non-cooking day, they might have cereal with reconstituted dry milk for breakfast, and on top they could put raisins or freeze-dried raspberries. For lunch they might have a peanut butter and jelly tortilla or they’d open a can of tuna or some pepperoni and make wraps with rehydrated vegetables. Our crew went beyond what astronauts can do because they’re in unit gravity; food will stay in the pot. So for dinner they might have an instant entrée or soup and some couscous.  On the other two days they could cook anything they liked.

JH: It’s about 900 square feet of living area inside a thirty-six-foot-wide dome. It has six sleeping chambers of about fifty square feet each, a lab, office space, a dining area, an upstairs half bath, and a downstairs full bath. We insisted on two toilets, because if you have only one and it breaks, your simulation is doomed. The kitchen has three induction burners, a convection oven, a microwave, a breadmaker, a sink, counter space, a tiny fridge, and a tiny dishwasher, because we wanted to compare resource use under various experimental conditions. For example, we compared water use with a dishwasher versus washing by hand.

CAM: Are there any windows?

JH: Just one porthole, and what they saw looked like Mars. We wanted the habitat to be visually and physically isolating. You couldn’t see any ocean or trees—just lava fields. When we had people go up to replenish the water or take away sewage and trash, we asked the crew to close the porthole. That was meant to enforce the feeling of isolation which, along with the barren and rocky landscape, was designed to make them feel like they were all by themselves on another planet.

CAM: Was the crew in contact with the outside world?

JH: They had a cell phone for emergencies, which they never used. All communication went by e-mail. For the first portion of the mission they had instant access to the Internet, but afterward we put them on a twenty-minute communication delay. If they wanted to look up something on Wikipedia, it would take twenty minutes for the page to respond.

CAM: Were they allowed to leave the dome?

JH: They were able to suit up and go outside, and they really enjoyed that. There’s nothing like a walk in the sun, even if you’re wearing a spacesuit.

CAM: How did you find people who were willing—and psychologically suited—to spend four months in relative isolation?

JH: Out of almost 700 applicants, we interviewed thirty semi-finalists by Skype. Then we brought nine finalists to Cornell for a week and put them up in the Best Western. They stayed three to a room and were together all the time. We trained them in the scientific work they would have to do, took them to the Hoffman Challenge Course for team-building activities, and had two days of cooking classes in the Martha Van teaching kitchen. Then we picked our six crew members and three backups, and in January the crew spent two weeks at the Mars Desert Research Station in Utah.

CAM: Did the Hawaii experiment go as expected?

JH: We have mountains of data to analyze, but one surprise was that the crew members lost some weight, and they weren’t supposed to. In fact, NASA is very eager for people on long-term space flights not to lose weight; it endangers their health. But I think what happened is that as soon as the mission started the crew launched into some serious workouts, because we were doing a study with the Advanced Clothing Technology lab at Johnson Space Center on antimicrobial fabrics for exercise wear. So they were doing forty-five to sixty minutes a day of hardcore exercise, which is going to change anybody’s body type. They all came out a lot more buff than they went in.

CAM: What lessons have you learned so far?

JH: The crew was wildly enthusiastic about doing their own cooking. Part of it was that they liked their cooking better than backpacking foods, but I think they also appreciated the opportunity to be creative and do something for each other. Cooking and sharing food is a part of human culture that’s difficult to maintain when your food comes out of bags or cans, and all you do is mix it with water.

The view from inside

Among the six crew members in Hunter’s experiment was Yajaira Sierra-Sastre, PhD ’09. Trained in materials chemistry and nanotechnology, the Puerto Rican-born Sierra-Sastre served as the mission’s science officer.

Cornell Alumni Magazine: Why did you want to participate?

Yajaira Sierra-Sastre: I have always been interested in space—last year I applied to the NASA astronaut program—and I’d been looking for opportunities to connect to space-related research. I also love cooking as a hobby, and I understand that space food is an important problem to solve.

CAM: Could you describe the atmosphere in the habitat?

YSS: It felt like being a specimen in a test tube, because we knew we were part of the science that the principal investigators are working on; we were test subjects. We were also six scientists living and working together every day, and that fostered creativity and collaboration in ways I haven’t experienced before. For me it was a very enriching environment. And the habitat itself was beautiful—small, but roomy enough and so well designed that we didn’t feel confined or trapped.

CAM: Did you ever have cabin fever or long for more privacy?

YSS: I didn’t. The high levels of social interactions in this confined environment reminded me of home—Puerto Rico—where life always revolves around people and relationships.

CAM: What did you think of the food?

YSS: It was tasty, especially the things that the crew was allowed to cook. We had a huge variety of ingredients, so we ate pretty much everything you can think of. Every time someone would cook a new dish, it was a party.