“I have a slight-to-major Hayley Paige obsession,” the future bride admits. “I’m a little bit in love with her. I kind of want to be best friends.” 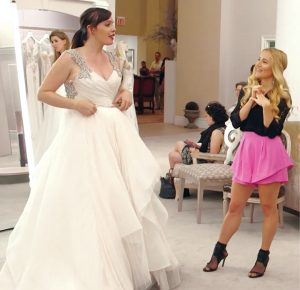 Gutman (in pink skirt) on “Say Yes to the Dress” with a bride who chose a custom combination of the designer’s Carrie bodice and Lennon skirt. TLC

On a 2016 episode of the long-running TLC reality show “Say Yes to the Dress,” a young woman named Elisabeth comes to Manhattan’s Kleinfeld Bridal salon in search of the perfect gown for her Long Island seaside nuptials. She has a designer very much in mind: Hayley Paige Gutman ’07, who has had her own line of romantic-but-sophisticated wedding gowns since 2011. “I love her use of beadwork,” Elisabeth enthuses. “Not like crazy sparkly beadwork, but it’s all very antique-y looking while still being very modern and fresh.”

After trying on several gowns, Elisabeth leans toward one of Hayley Paige’s iconic styles: the Carrie, which features wide, crystal-beaded straps in an intricate leaf pattern that embraces the shoulders to form a dramatic keyhole back. (“I’ve stalked this dress on Instagram!” she admits.) But she laments that its skirt isn’t as voluminous as one of the others she’d modeled: the Lennon, whose elaborate pleated bottom is made of diaphanous layers of English net and organza. When Gutman herself comes in—to the future bride’s shock and delight—she mocks up a customized version of the dress by combining the Carrie bodice and the Lennon skirt, calling it “the best of both worlds.” “Oh my God, this dress is unbelievable,” Elisabeth says, reduced to happy tears after trying it on. “It’s elegant, it’s a little sexy, it’s got glamour, it’s unique… It’s me personified as a dress. I can see myself walking down the aisle.” 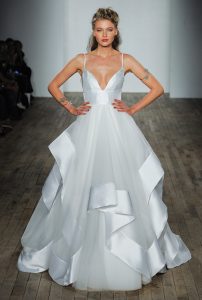 One of her recent gown designs, the Andi.Provided

She does, of course, say “yes” to the dress—making her one of the tens of thousands of brides and their attendants that Gutman’s gowns adorn each year. Sold under the umbrella of the large, multi-label bridal house JLM Couture, Gutman’s designs comprise several lines, including two tiers of wedding gowns: Hayley Paige, priced at $3,000 to $7,000, and the more affordable Blush by Hayley Paige, which range from $1,200 to $3,000. As Martha Stewart Weddings put it in a preview of Gutman’s spring 2018 collection: “If Hayley Paige is known for one thing, it’s creating wedding dresses with a healthy dose of shimmer. That, and designing her eponymous collection with a distinctly vibrant, youthful vibe and a dose of edginess.”

Gutman also creates dresses for bridesmaids and flower girls; sells a collection of pink-and-white leisure garb—bearing slogans like “Sparkle Squad” and “Wedding Day Vibes”—for the bride and her attendants to wear while getting their hair and makeup done; and designs a couture line that’s available only at the JLM flagship store in West Hollywood (and has been worn on the red carpet by celebrities like Olympic gymnast Aly Raisman, musician Carrie Underwood, and model Chrissy Teigen). “My biggest goal is to keep developing as a designer—to always be a student of design and to know that I’m going to be learning something new,” says Gutman. “I’ve always felt that you can’t use up your creativity. The more you do it, the better you get at it.”

It’s a Tuesday in mid-May, and Gutman is chatting with CAM in her office in the heart of Manhattan’s Garment District—a room familiar to fans of Gutman’s many media appearances, including on “Say Yes” and her TLC multimedia series, “Happily Ever Hayley.” The walls are decorated floor to ceiling with photos of models wearing her dresses, and a giant mirror stands ready for fittings; just outside the door is a “sample room” where seamstresses and patternmakers are at work creating prototypes of Gutman’s latest designs. Everywhere, clothing racks overflow with dresses from her various lines; in her office, one bulletin board bears examples of new embroidery concepts, while another has ideas for her popular series of wedding-themed emojis (dubbed “Holy Matrimoji”) that she offers free through the iTunes Store. On her computer screen is another recent creation: a partly completed drawing of wedding attire for this year’s most famous bride and groom, whose nuptials are just days away. “I’m designing Meghan Markle’s dress!” Gutman says with a wide grin, holding the beat for just long enough to make one wonder if she’s just offered the scoop of the decade. Then: “Just kidding!”

Gutman may not have landed that plum gig, but she did serve as a post-ceremony expert on TLC’s “Royal Wedding Revealed,” where—in addition to presenting her own fantasy design for Markle’s gown and declaring the groom “a hunka-hunka burning ginger”—she admitted to some disappointment in the much-anticipated dress. “The fit was not quite right, I felt,” said Gutman, who appeared on the show in one of her own couture designs: a pink, backless, see-through number with elaborate embroidery, complete with matching stiletto heels and feathered fascinator. “It’s a very difficult fabric to work with, the silk cady, and I felt like the sleeve was a little bunchy. It should have been more tailored… I wanted something that was bodacious and kind of showed off her frame a little bit.” 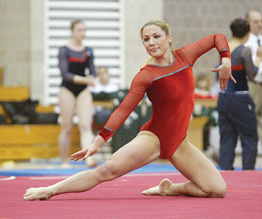 The designer during her days as a Big Red gymnast.
Tim McKinney/Cornell Athletics

A varsity gymnast at Cornell who’d previously trained for the Olympics, Gutman is petite and fit, with bright blue eyes and a mane of wavy, waist-length blonde hair. (“She’s like a little fairy princess,” noted Elisabeth, the TLC bride, “and I want to hug her.”) Eager to interact with her brides and other fans, Gutman is active on social media—particularly Instagram, where she has more than 700,000 followers and her posts garner thousands of likes—and is regularly on the road for trunk shows, events at which stores showcase particular designers. Her aesthetic, she says, “is a little bit rogue and sassy, but also humorous. I’d rather feel like the bride’s friend than like, ‘I’m the professional and you need to listen to me.’ It’s a collaboration in a way, because I’m directly inspired by them.” Today, she’s clad in a fashion-forward ensemble (not of her own making): a Southwestern print blouse, a short black mini-skort, and black lace-up boots with pearl-encrusted heels, accessorized by chunky-framed eyeglasses, a diamond-patterned statement necklace, and pinkish-orange lipstick. “When you’re getting married, there’s such an emotional investment,” she observes. “The dress can capture the charm and heart that goes into that commitment, and I feel like that’s present in a lot of Hayley Paige gowns. A lot of brands pride themselves on having a heritage—sort of an intimidation. That’s not my cup of tea. My cup of tea has whiskey in it.”

Say “Yes!” to subscribing to your Alumni Magazine!

Gutman grew up in Northern California, the daughter of a surgeon and an interior designer. She learned to sew from her grandmother, and dreamed of being a wedding dress designer from a young age; when she created her own prom gown, she says, “it looked like a wedding dress. It was straight-up white and it had tulle.” But Gutman also had a knack for science, and when she matriculated into Human Ecology, she planned on following a pre-med track while taking as many design courses as she could. “But at some point in my college experience,” she says with a laugh, “I wanted to be making pretty dresses and not solving carbon equations.”

She majored in fiber science and apparel design, landing a coveted internship at Elle magazine. Her senior collection in Cornell’s annual student-run fashion show consisted entirely of wedding gowns—and she got lucky when a high-end fashion designer who happened to be in the audience offered her a job on the spot. One opportunity led to another, and by age twenty-five Gutman got her foot in the door at JLM. The firm’s CEO had her audition by designing a capsule collection in a few weeks; she came back with it the next day, complete with price points and profit margins. “It’s still almost unbelievable that I get to do this for a living,” she says. “It’s hard work, of course, but there’s so much that’s playful and creative. It’s so sentimental. It gets me really fluttery and emotional sometimes. I still cry during trunk shows when a girl says yes.”