Some mornings, Leo Ikenaga ’12 admits, he’d wake up in the pre-dawn and it would take him a moment to remember where he was. The answer: a former middle school in the mountains of Japan. No TV, no phone, no Internet. Rising at 5:00 a.m. to run a half-dozen miles uphill and down. Tending a vegetable garden and a rice paddy. And—the underlying motivation for all this—spending hours a day, every day, perfecting the art of traditional Japanese drumming. 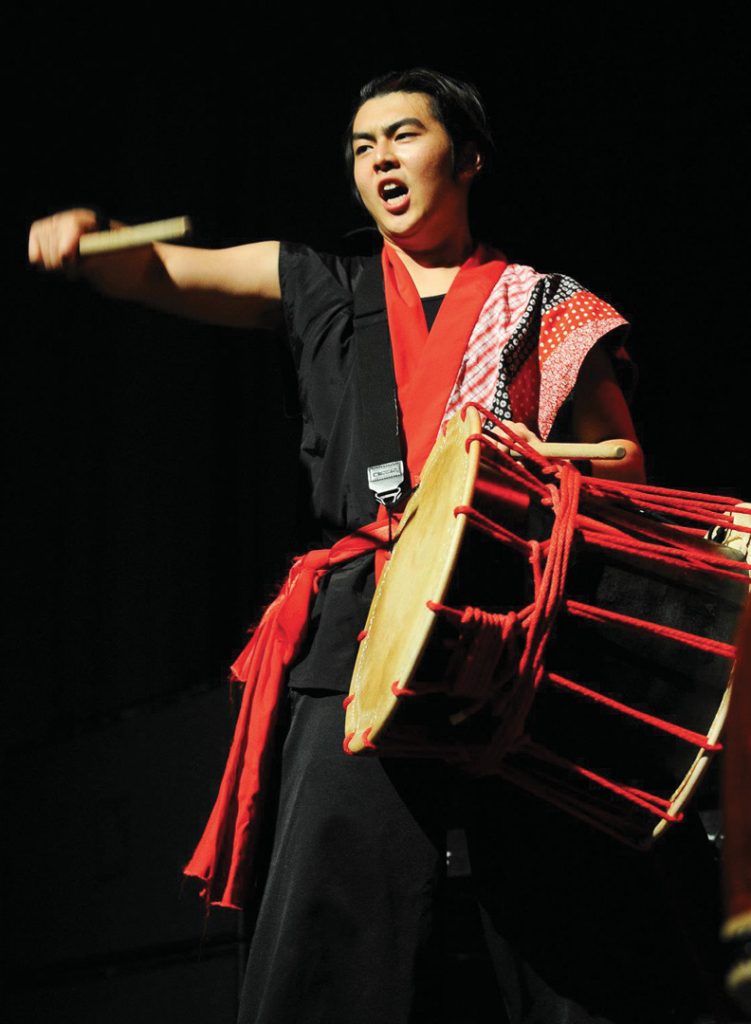 Ikenaga performing as an undergrad with Cornell’s Yamatai.

Ikenaga is a member of Kodo, an elite, thirty-member musical group based on Japan’s Sado Island. Primarily dedicated to the pulsating and dynamic drumming style known as taiko, the group tours the world performing hundreds of concerts each year. “It could well be said that a drum is a drum is a drum,” Ireland’s Independent said in a review a few years back, “but with Kodo it can become the fluttering wings of a myriad insects, a pony’s clip-clopping over cobbled streets, the peal of mighty thunder claps, or the shattering cacophony of exploding salvos.” As Kodo notes on its website, in Japanese the name holds a double meaning: it can be translated as “heartbeat” or as “children of the drum”—with the latter reflecting the group’s desire “to play the drums with the simple heart of a child.”

Ikenaga entered Kodo’s apprenticeship program in 2013, spending two years in its Spartan training facility—“We lived like monks, basically,” he says—before being admitted as a junior member in January 2015. He became a full performing member a year later, having survived three rounds of cuts that winnowed out most of his fellow trainees. This winter, Ikenaga went on his first North American tour with the group, an itinerary that allowed numerous Cornellian friends to see him play at such venues as the Brooklyn Academy of Music and L.A.’s Walt Disney Concert Hall. He had, after all, fallen in love with taiko on the Hill—and first learned it from fellow students.

Born in Michigan to Japanese parents (his dad is an alum, Tomoaki Ikenaga, LLM ’88), Ikenaga grew up playing piano, cello, and guitar; after his family moved back to Japan, he attended middle and high school there. During orientation week on the Hill, he saw a performance by Yamatai—the student group devoted to taiko that debuted on campus in fall 2007—and immediately joined up. Other members taught him how to play, and by his senior year he was the group’s musical director.

After graduating with a double major in economics and Asian studies, Ikenaga interned for banks in Japan and figured he was headed to a career in finance. But his heart wasn’t in it, and—reflecting on, among other things, the Lehman Brothers collapse of 2008 and the deadly earthquake and tsunami that had struck Japan in 2011—he took a deep breath and reassessed his future. “I wondered what it would be like when I’m forty and I look back and realize all the things I didn’t do,” he says. “I guess that feeling comes to a lot of people in their twenties or in college—the feeling of, ‘What am I doing with my life?’ ”

For Ikenaga, the answer lay in his passion for taiko. He applied to Kodo, was invited to audition, and earned a spot as an apprentice. Which begs the question: what did his parents think of him being a musician with an Ivy League economics degree? “At first they were not exactly thrilled, to put it lightly,” he says with a laugh, chatting with CAM by phone during the mid-Atlantic leg of Kodo’s American tour. “They thought I didn’t know what I was getting into. But they’re very supportive now, and they come to my shows all the time.”

In addition to drums, Ikenaga has learned other traditional instruments, including the bamboo flute. The group keeps up a rigorous rehearsal schedule when not on tour: practices start at 9:00 a.m., and while they officially end at five, they can stretch as late as 10:00 p.m. Those marathon practices help keep Ikenaga in shape—taiko drumming is an athletic, full-body activity whose practitioners tend to be strikingly fit—along with jumping rope and doing core work like sit-ups. “Many people tell me they’ve never seen anything like us,” he says when asked to describe a Kodo show. “We’re a drumming group, but we explore all kinds of artistic possibilities. We try to create something that’s truly original and entertaining. I think we do something that’s very special, and it’s ineffable. You really need to come see it for yourself.”