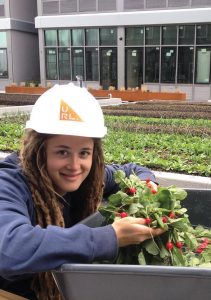 Bates with a harvest of radishes

The bees that Zaro Bates ’11 helps tend have a view that many New Yorkers would kill for. Housed in twenty colorfully painted hives, they dwell on the roof of a five-story apartment complex on the north shore of Staten Island, the cityscape arrayed before them in a sweep from Jersey City to the Verrazano-Narrows Bridge. There’s Governor’s Island in the foreground; Brooklyn across the water; the Freedom Tower rising from downtown Manhattan; distant buildings in Queens; the Staten Island Ferry chugging along.

Down below, nestled between two apartment buildings, is an even more striking sight: rows of food crops in lush swaths of green. Bates, a CALS grad, is an urban farmer. She and her husband run Empress Green, a farm and agricultural consulting company based out of this Staten Island residential development.

Known as Urby, the complex offers some unconventional amenities, from a well-appointed communal kitchen to a filtered-water station aimed at reducing the use of disposable bottles. Bates and her Australian-born husband, Asher Landes, are Urby’s farmers-in-residence. In addition to working roughly 5,000 square feet of agricultural space, they conduct workshops on topics like beekeeping and growing microgreens, host a weekly Saturday farmstand, supply produce to several local restaurants, and run a small CSA. “The idea of urban farming has really captured people’s imaginations,” says Bates. “Some traditional farmers are skeptical, even just about calling an urban farm a ‘farm.’ We get a lot of funny questions. ‘Where’s the tractor? Where’s the red barn? Where are the animals? Do you have cows on the rooftop?’”

It’s a brilliantly sunny day in mid-May, the first harvest week of the farm’s second season. As Bates chats with CAM—she’s clad in pinstripe overalls, a blue sweatshirt, low brown boots, and a navy bandana over dreadlocks, with a water bottle in a hip holster—Landes is gathering arugula, baby spinach, and radishes to incorporate into their breakfast. “Greens are our biggest category, because they’re high rotation and really good in terms of space-for-return,” she says. “Last year we did a wider variety of summer vegetables, but this year we decided to go for more quantity, so we’re concentrating on tomatoes and peppers.”

A Brooklyn native, Bates grew up with a treehouse in her Carroll Gardens back yard. She attended Bronx High School of Science and spent her freshman year of college at Georgetown before transferring to Cornell, where she majored in development sociology. “She was a pretty unconventional student, and extremely thoughtful,” recalls Professor Phil McMichael, one of her mentors. “She’s one of a kind. Zaro is very warm and has a sense of being an active citizen. She’s really outstanding.” 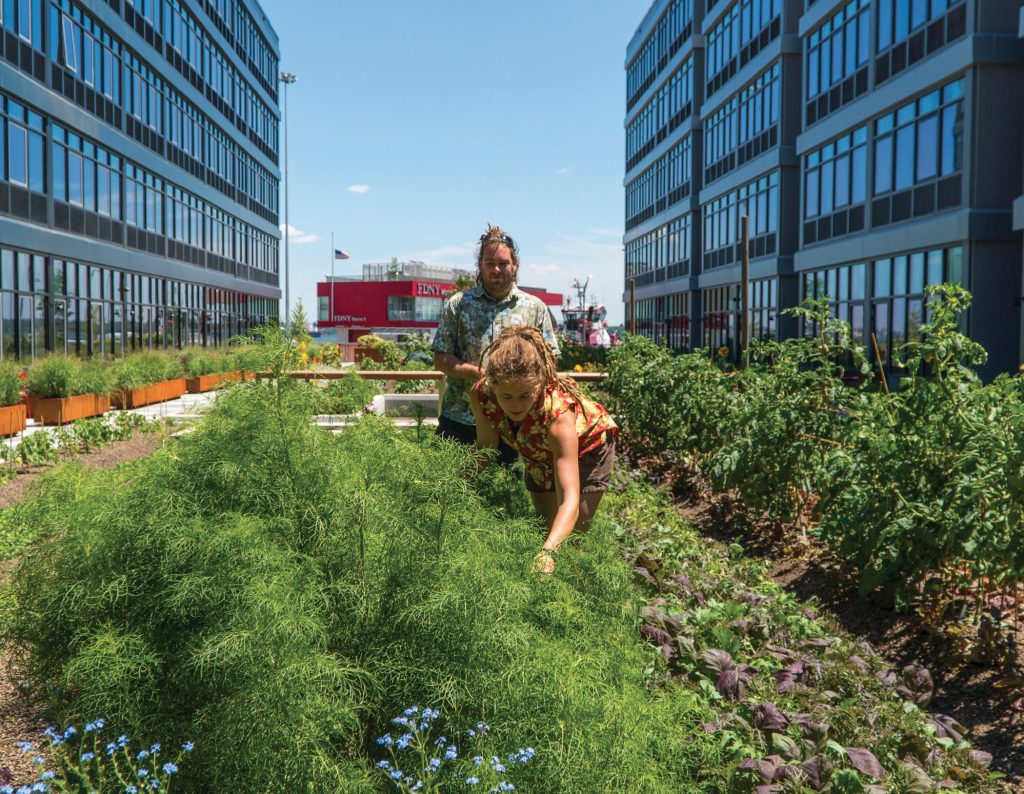 BUMPER CROP: Bates on the farm with her husband and business partner, Asher Landes.

Bates got her first taste of physical labor as a volunteer at the Kripalu yoga center in Western Massachusetts, where she was assigned to the grounds crew. “I got there in the depth of winter, and I was shoveling snow and doing woodland maintenance,” she recalls. “I grew muscles and learned to drive a tractor. It was exhausting, but really fulfilling.” She gained much of her training in farm work as an intern at the Brooklyn Grange, the city’s pioneering rooftop farming group; it was there she met Landes, a culinary school grad who had previous experience in farming and beekeeping. They teamed up to form Empress Green, signing on to the Urby project in 2013.

The couple live at the complex—their apartment is part of their compensation—and do most of the labor themselves, though they aim to hire help and eventually expand their growing space. In addition to the main plot of raised beds—nurturing greens, tomatoes, peppers, garlic, and herbs like basil, cilantro, and dill—they tend a few nearby planters containing edible flowers as well as a 200-unit milk crate garden filled with snapdragons, zinnias, and other blooms. While the couple originally germinated plants on their home windowsill, they outgrew that space and now have a second apartment for use as a nursery, office, and storage area. “I love the actual horticulture,” Bates says. “Watching the plants grow, seeing them through from seed to maturity, is a very healthy, spiritual process. And there’s a more philosophical, sociological dimension to it—the idea that I can be working to create social impact, but don’t have to wait a lifetime to see the fruits of my labor.”