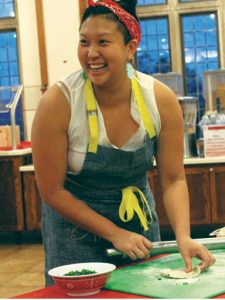 On a Thursday night in November, a crowd gathers around Irene Li ’12, BA ’15, as she stands in the center of the bustling Okenshields dining hall, demonstrating how to turn a few basic ingredients into something delicious. She grabs a ball of dough—just flour and salt mixed with hot water—and rolls it flat, coats it with sesame oil, and sprinkles on a liberal layer of chopped scallions. Then she rolls the disc up into what she calls a “snake,” coils that into a snail-like shape, and flattens it back down with a rolling pin. Voilà: a flaky scallion pancake, ready to be fried in oil and shared with the hungry undergrads.

The co-founder of a popular Chinese-inspired eatery in Boston, Li is no ordinary chef; in fact, she has little culinary training beyond a six-month stint as a line cook at an Italian restaurant. On the Hill, she was a College Scholar who spent her first three years focused on criminal justice reform and prison education, even teaching at a maximum-security facility in nearby Auburn. But when her father was diagnosed with Alzheimer’s, Li took a leave of absence to move back to her native Boston and open a food truck with her two siblings.

That truck, dubbed Mei Mei (her sister’s childhood nickname), eventually grew into a casual restaurant in the city’s Fenway neighborhood. And its creative fusion of Chinese and American flavors—along with a focus on pasture-raised meats and local produce and a commitment to fair labor practices—has garnered some major accolades. Li has landed on “30 Under 30” lists by both Forbes and Zagat and has been a James Beard “rising star chef” semifinalist for four years running. “It feels really wacky,” Li says of her many laurels. “I still feel like I’m mostly a hobbyist. We do so many things as a business that maybe objectively are a little stupid and kind of unprofitable”—like paying two or three times the norm to source top-quality ingredients—“so to be rewarded for that is an interesting thing.”

Last fall, Li returned to campus for a visit—speaking to classes, holding training sessions with Cornell Dining staff, meeting with students, doing the cooking demo in Okenshields (which served several Mei Mei dishes at dinner), and giving a talk entitled Entrepreneurship, Participatory Business Governance, and Food Justice. “Irene is an amazing young woman and entrepreneur, and she has a lot to give to the food service and restaurant management industries,” says one of her mentors, Jennifer Majka, director of diversity and inclusion at the Dyson School. “She’s very high energy, passionate, and smart. In her sphere of influence, she’ll make meaningful change.” 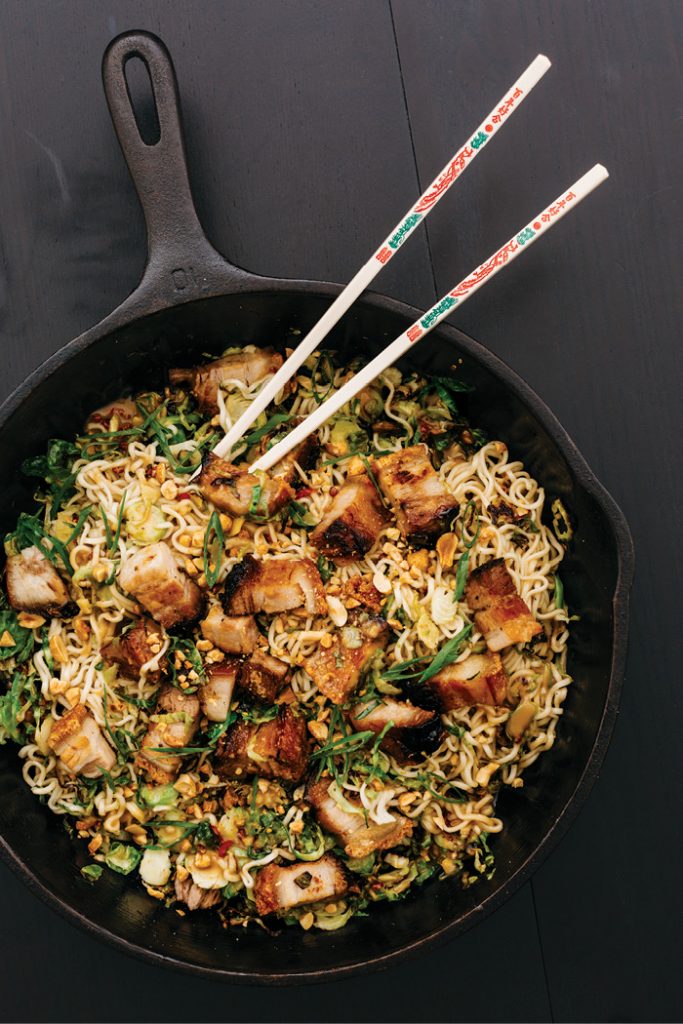 Dan Dan Noodles with Crispy Pork Belly and Brussels Sprouts, a dish from the new cookbook that Li co-wrote with her siblingsJess Townsend

While Li didn’t grow up dreaming of opening a restaurant, she notes with a laugh that food was very much at the center of life for her Chinese-American clan. “I think every family gathering was about, ‘What are we eating for dinner?’ ” she says. “And at every dinner, it was like, ‘What are we eating tomorrow for dinner?’ ” As an undergrad with her own apartment downtown, Li made weekly trips to the Ithaca Farmers Market as a way to decompress. “Lots of people go there just to eat, and that was definitely me at first,” she recalls. “But once you get past the cider donuts and breakfast burritos, there’s all this produce and meat and lots of really interesting people.”

She started watching “a ton of Food TV,” joined a CSA, and got a job at the Piggery, an Ithaca purveyor of humanely raised pork products. When she moved back to Boston to open the truck with her siblings, they divided the labor: she was in charge of the food, her sister the business side, and her brother the hospitality and human resources issues. (Li bought them out last year, though they still serve as advisers.) Mei Mei now uses the truck only for special events, including catering about a dozen weddings a year; Li’s main focus is the restaurant, a thirty-six-seat venue on Boston University’s South Campus.

The menu features a variety of scallion pancake sandwiches, in which the traditional Chinese flatbread is employed as a wrap; they include Mei Mei’s top seller, the Double Awesome, which comprises two “oozy” eggs, Vermont cheddar, and pesto made from local greens (priced at $9). A variety of “little plates,” costing around $4 to $6, include parsnip fries, spicy cucumber salad, broccoli with black bean spread, and a turnip cake topped with hoisin sauce made from local apples and sweet potatoes. Mei Mei is also known for its dumplings—the restaurant offers classes on making them—with unusual fillings such as cheddar and potato; braised beef with red wine and blue cheese; and “three sisters,” the traditional Native American triad of beans, squash, and corn. “We knew it was never going to be authentic Chinese food, but it’s about being authentic to who we are,” Li says. “A lot of the food is a little bit Chinese, some of it’s very Chinese—and some of it’s not Chinese at all, it’s just about an ingredient we love or an idea we came up with.”

Recipes for all three of those dumplings, along with dozens of other dishes, are collected in a cookbook that Li and her siblings published in February. Entitled Double Awesome Chinese Food: Irresistible and Totally Achievable Recipes from Our Chinese-American Kitchen, it also includes a shopping list for a basic Chinese pantry (and an advanced one), as well as pro tips that can aid the home chef. “We definitely feel that people should cook more—and that for whatever reason, there’s a lot of fear around it,” Li says. “Our message, in part, is that you can do it. Cooking doesn’t have to be hard. And if you mess up, you can just eat the evidence and start over.”

One thought on “Home Cooking”