Ezra Cornell was not a grandiose sort. Buildings like Morrill and White, constructed under his supervision, reflect his pragmatic approach to architecture. Llenroc, the stone mansion he built for his family, is an anomaly in the founder’s design aesthetic—a formidable neo-Gothic villa boasting twenty-foot ceilings, crystal chandeliers, and intricate molding that many initially dismissed as “Cornell’s Folly.” “It’s not really in his character,” says University archivist Elaine Engst, MA ’72. “He was a Quaker—plain-thinking, plain-dressing, and plain-living.”

But an 1862 tour of English country homes, as well as some persuasion by the more extravagant A. D. White, influenced Ezra when it came time to build a grand house for his family. He personally selected the materials—the façade was made of limestone from a quarry near White Hall—and oversaw construction, which began in 1867. When Ezra died in 1874, he left the unfinished house to his family. The following year saw the completion of Llenroc (the name, of course, is “Cornell” spelled backwards), and Ezra’s wife and children moved in. They lived there on and off for thirty-two years, holding “pantry teas” in the kitchen on Sunday evenings.

By the early twentieth century, the Cornells had vacated the villa, too grand for their needs. Meanwhile, the Pi chapter of Delta Phi fraternity, incorporated at Cornell in 1891, was searching for a house. In 1911, George Tarbell 1891, LLB 1894, a prominent Ithaca lawyer and co-founder of the chapter, purchased Llenroc from Ezra’s daughters. “There are a number of big houses that other fraternities live in,” Engst muses, “but this would have been seen as a real prize.” With the exception of both World Wars—when servicemen occupied the house—Delta Phi brothers have lived there ever since. In September, the fraternity will mark a hundred years of ownership with its “Century at Llenroc” celebration, aimed to bring several hundred members and their families back to the villa, the largest gathering of alumni in the chapter’s history. 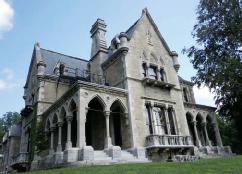 Llenroc itself has evolved over the years. Modern furniture has replaced Victorian trappings, and framed class photos of the brothers hang on the library walls, a reminder of the generations who have passed through. “We consider it our home,” says Delta Phi Association president Ian Wright ’94, “so it can be a challenge, with the wear and tear of time, to keep it a beautiful, historic place while upgrading the facilities for Internet, modern heating, and energy savings.” Members of the Llenroc Foundation hope to raise $1 million to fund renovations, which have included projects like repairing the roof, restructuring the kitchen, and refinishing the woodwork. “It’s not very glamorous stuff,” member and architect Art Gensler ’57 explains, “but it should be maintained, first because it’s Ezra Cornell’s home and second because it’s one of the great buildings in America.” In 1980, that significance became official when Llenroc was added to the National Register of Historic Places. “The chandeliers in the music room and living room, there are only three in the world like them,” Gensler notes. “One of them is in the Smithsonian— and the other two are in Llenroc.”