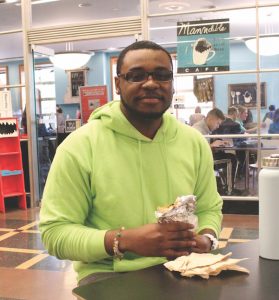 Samuel Williams ’19 (above, outside a campus café) is among the many American college students who have struggled to afford nutritious meals.

For much of his Cornell career, information science major Samuel Williams ’19 didn’t get enough to eat. It wasn’t because he habitually slept through breakfast or studied through dinner. Williams skipped meals because he had tuition bills—not to mention the cost of textbooks, rent, and other expenses—to pay first. “If you don’t have money,” he puts it simply, “you can’t get as many meals as you need.”

Unfortunately, experiences like Williams’s aren’t rare. Thousands of college students around the country identify as “food insecure,” meaning that they don’t have enough to eat on a daily basis. An April 2019 survey by Temple University asked students from more than 100 schools, including community colleges and four-year universities, if they’d experienced food insecurity within the previous month; 45 percent said yes. On the Hill, a 2017 student life survey posed a similar question—and a third of Cornell undergraduates admitted to skipping meals or not getting enough to eat because of financial constraints. It’s an issue that has been making headlines nationwide: in April 2018, the Washington Post called student hunger “the hidden crisis on college campuses,” while a New York Times headline this past May posed a poignant query: “Tuition or Dinner?”

Over the past few years, several initiatives have been launched at Cornell to combat student food insecurity. As Shakima Clency, an associate dean of students, noted in the Cornell Chronicle in January, it’s a complex problem that can be intertwined with other challenges, such as housing or transportation constraints—and it can have a negative impact on student performance. “Food insecurity also can cause other issues,” said Clency, director of first-generation and low-income student support, “such as sleeping in class, being unable to concentrate, or struggling to complete assignments.” 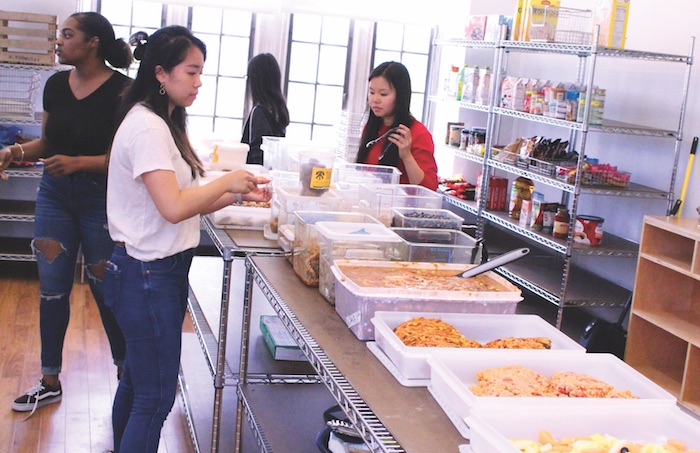 One of the most high-profile efforts to address food insecurity on the Hill was conceived in 2015, when two undergrad members of the Student Assembly proposed establishing a student-run grocery store on campus. “They became increasingly aware that some students at Cornell weren’t eating three meals a day,” says Anke Wessels, executive director of the Center for Transformative Action, a University-affiliated nonprofit that supported the project, “because they couldn’t afford to.” Located in Anabel Taylor Hall, the store—dubbed Anabel’s Grocery—was aimed at giving students access to affordable and nutritious food without driving or taking the bus. It opened in fall 2017 and ran for three semesters, stocked with fresh produce, canned goods, and more. While it encountered some logistical and financial hurdles that shuttered it for spring 2019, it will return this fall with a revamped format, including being open three days a week (instead of six) and keeping prices low by buying products like beans, grains, and spices in bulk.

Also in 2015, an undergrad created a now-thriving text message “group chat” to alert users to free food on campus—everything from hors d’oeuvres laid out for a corporate recruitment event to pizza left over from a department party to groceries being given away before students leave for break. Most people joined to cadge free snacks once in a while, but some—like Williams, who routinely searched for evening events where he could score dinner—relied on the chat to keep from going hungry. This past academic year, it swelled in popularity, approaching 4,000 members. “It’s not going to address the large-scale food insecurity problem,” says Moriah Adeghe ’21, the chat’s current moderator, “but it at least tries to quell it to a certain degree.”

Among the roughly 2,000 Cornellians who joined the chat in 2018–19 was Gloria Coicou, a grad student studying for a dual master’s degree in health administration and public administration. Coicou had experienced food insecurity first-hand—including visiting a food pantry in downtown Ithaca—while studying full time and raising her son, now seven. As she puts it: “I’m one of those people who struggle with deciding, do I want to eat or put gas in my car?” Seeing that other students were in the same situation, Coicou was inspired to start an on-campus food pantry last fall—operating first out of her car and later in the space left vacant during Anabel’s hiatus. Called Bread N Butter, it gleans its inventory from food banks, grocery store surplus, donation bins on campus, and other sources—offering produce, dairy products, baked goods, premade sandwiches, and more. Each week, Coicou says, about 200 students attend and some 700 pounds of food is distributed. Starting this fall, in collaboration with the office of Student and Campus Life, the operation is planned to move into a more permanent space. “Originally, the idea was to cater to the needs of grad students like myself who are living off campus and have families,” Coicou notes. “But it turns out that 70 percent of the students [who come to the pantry] are undergrads.”

The effort to combat student food insecurity has also moved into the dining halls. Last spring, Cornell Dining partnered with Swipe Out Hunger, a national nonprofit that promotes the donation of “swipes” (prepaid access to all-you-can-eat facilities loaded onto ID cards) to needy students. Through a pilot program (which may be continued on a permanent basis starting this fall), Cornellians could donate “bonus” swipes—extra meals allotted each semester for use by guests—which administrators then transferred to the cards of eligible students. Says Wessels: “I think the University is really being proactive to address this problem so that no student goes hungry, which is amazing.”

Among the national coverage of student food insecurity was a December 2018 piece in the New York Times that profiled Williams, a native of Guyana who aspires to a career in web design. The story chronicled his ongoing financial struggles—noting that he held down a job cleaning campus labs despite a heavy course load, and generally subsisted on a diet of “pasta, canned beans, and chicken tenders.” After it was published, a Big Red alum was moved to cover the cost of a full meal plan for Williams’s final semester. “There was an outpouring of support; I got a lot of e-mails from people who had similar situations in college,” he recalls. “It kind of opened my eyes. It helped me be more open, because I realized that there are people around me who may be facing the same issues. It’s better to talk about it than to keep quiet.”