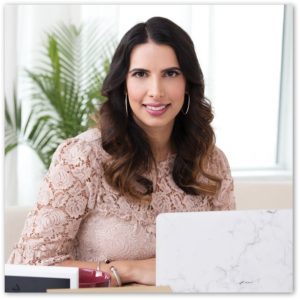 Gugnani in her Wander office. Provided

In 2010, Divya Gugnani ’98 appeared in an American Express commercial—promoting a credit card for small businesses—that showed the busy young entrepreneur in a New York City taxi, on her way to a meeting for her food media start-up. In real life, though, Gugnani’s commutes were much less glamorous. “I’d be putting on my concealer on the subway,” she recalls. “I’d look around the train, and there would be five other women putting on mascara. I realized that there was so much beauty happening beyond the bathroom, but there was no brand meeting the need for fewer, better products that you could use on the go.”

At a 2014 party, Gugnani—a serial entrepreneur who’d already started three businesses—shared that complaint with fellow guest Lindsay Ellingson, a former Victoria’s Secret model whose jetset life meant that she knew a thing or two about doing your face in an Uber. The two women met again for lunch and discussed their frustration with many-step beauty routines, both expressing a longing for effective, multi-tasking, portable products. After surveying 100 women about their beauty “pain points,” they felt confident that they weren’t alone in wanting to minimize their time in front of the mirror—so they decided to found their own cosmetics and skincare company, Wander Beauty, to create the kinds of products they craved.

Gugnani has drawn on her entrepreneurial experience to handle the business aspects of the company, while Ellingson serves as creative director. Their products have won accolades from the industry, including coveted spots on Allure’s annual Best of Beauty list. Last year, the magazine named Wander’s On-the-Glow Blush and Illuminator—a gleaming gold tube that offers a hydrating rouge at one end and a pearlescent highlighter at the other—as its favorite cream blush. The company’s Unlashed Volume & Curl Mascara has been lauded by both Allure and Harper’s Bazaar, which declared it a beauty “must-have” in 2017. For Gugnani, though, the most important reviews come from the real-life women who buy Wander products at the company’s website and through major retailers. Sephora customers praise the convenience of the Lipsetter, which pairs a lipstick and matching liner in one dual-ended pen; one of Wander’s most popular offerings among Nordstrom customers is another double-header, the Dualist Matte and Illuminating Concealer—a product that’s close to Gugnani’s heart. “When I cover my dark circles, I feel 25 percent better, because I look 25 percent better,” she says. “When you take care of yourself, that radiates into your mood.”

Gugnani’s love of cosmetics dates back to her teen years, but she only came to the industry after careers in other fields. A policy analysis and management major in Human Ecology, she landed a job in investment banking at Goldman Sachs after graduation and later earned an MBA from Harvard. While working as a venture capitalist by day, she co-founded and later sold a successful business that sold auto parts directly to consumers. She also explored other interests, including studying at the French Culinary Institute in New York. In 2008, she took what she’d learned about both the business and food worlds and launched an online media company, Behind the Burner, which offered expert culinary advice for a young, hip audience. Two years later, she published a book entitled Sexy Women Eat, a guide to staying slim while savoring good food. “Divya was always incredibly creative, and she loved team projects,” recalls Alan Mathios, former dean of Human Ecology and one of Gugnani’s Cornell mentors. “She has a holistic approach to understanding what people need, and how businesses can meet those needs.”

While Behind the Burner was profitable, Gugnani says, it didn’t reach the scale she’d hoped, so she pivoted to the fashion industry. Her next venture—Send the Trend, a shopping service that offered customers a curated selection of accessories for $30 per item—was acquired by QVC less than a year after its launch. Gugnani stayed with the company until 2014, around the time she gave birth to her second child. “I remember being in the delivery room and saying to my husband, ‘Just one more,’ ” she says—not one more child, but one more company. She had felt “disconnected” while working in the corporate world, she explains, and wanted to find a way to connect directly with customers and their needs. “When you’re an entrepreneur, the biggest problem is the itch to start new things,” she observes. “I had to go back to my roots and what excites me. I needed to create a business that was rooted in a community of real women.”

Wander is showcasing its products in a temporary space on Lexington Avenue in Manhattan that’s open through the end of July.Provided

According to a company rep, Wander Beauty saw an increase in net revenue of more than 300 percent between 2017 and 2018. It has some 185,000 Instagram followers; more than 60,000 people follow it on Facebook. Wander’s products are available on Amazon, and the brand is currently hosting a pop-up shop on Lexington Avenue in Manhattan (it closes July 31). As Gugnani notes, the company frequently turns to its customers for guidance, through online polls and focus groups that inform the development of new products. Take the recently released Nude Illusion Foundation: many competitors offer similar products in glass bottles, but Wander’s fans wanted a portable, lightweight plastic tube. Wander’s customers have also asked for—and gotten—recyclable packaging, as well as makeup that contains ingredients (like moisturizers and antioxidants) that are typically found in skincare products, so women can get optimal results from the limited time they have to devote to a beauty routine. “Our customer is living a life in motion, and she needs beauty in motion, too,” Gugnani says. “Today’s woman is more time-starved, busy, and active than ever before. Wander Beauty wants to make her life easier.”