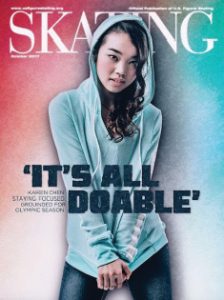 Chen on the cover of Skating magazine. Provided

Clad in a diaphanous white dress whose delicate sleeves and sequined accents evoke the wings of a bird, figure skater Karen Chen ’23 concludes her near-flawless performance with a dramatic spin—beginning with her body arched gracefully backward and ending with one leg clasped above her head as she twirls around and around. When she glides to a stop, the crowd goes wild. “That was gorgeous,” raves a TV commentator. “This was mature. It was elegant, sophisticated. She hit her jumps.”

It was the short program portion of the 2017 U.S. senior ladies’ national championship, and Chen’s score was the highest ever awarded. She’d go on to ace her free skate (the longer second program) and take home the gold medal, making her the nation’s top female figure skater. For Chen, it was not only a victory, but—at the tender age of seventeen—something of a comeback: she’d won bronze in her senior debut two years earlier but finished eighth in 2016, a disappointing season during which she’d struggled with chronic problems› related to the fit of her skates. “When I’m at a competition, I need to trust myself and know I’ve done all the training I can, and whatever happens, happens,” observes Chen, who headlined the spring 2017 Stars on Ice tour along with fellow champs like Nathan Chen (no relation), Ashley Wagner, and Gracie Gold. “Sometimes it’s just not your moment—but other times it is, and everything clicks.” 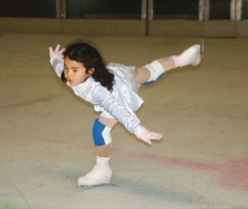 In her early days on the ice.Provided

Now a Human Ecology student—she’s majoring in human biology, health, and society and contemplating medical school—Chen first ventured onto the ice at age four and began competing at six. She won the national championships in two divisions (intermediate and novice) before taking the senior title; she skated for Team USA at the 2018 Olympic Games in Pyeongchang, South Korea, finishing eleventh. Like many elite athletes, she has coped with injuries, including an ankle fracture she suffered while practicing a triple Lutz jump in 2013 and a stress fracture in her foot that caused her to miss the entire 2018–19 season. She chronicled her career ups and downs in Finding the Edge: My Life on the Ice, her 2017 young-adult memoir. “I wish I could remember the first time I laced up a pair of skating boots and slid out onto that big, frozen circle,” she writes in the book, which features a foreword by Olympic gold medalist Kristi Yamaguchi. “After all, who wouldn’t want to remember the moment they fell in love?” 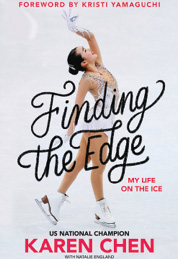 Her memoir for young-adult readers.Provided

The elder child of Taiwanese immigrants, Chen was born in the San Francisco Bay Area city of Fremont—also the hometown of Yamaguchi, one of her idols. To give Chen the flexibility to practice, her mother homeschooled her from sixth grade onward; when she needed a new coach in early 2013, she, her mom, and her younger brother (a competitive ice dancer)relocated six hours away and reunited with her dad on weekends. When Chen matriculated on the Hill last fall, it was a major adjustment: before, she had fit her studies around her training, but now it was the other way around. “It was really, really challenging to find a schedule that was efficient and worked for me and allowed me to get enough sleep to function the next day,” says Chen, who hasn’t joined any clubs or other extracurriculars. “It’s been mostly just schoolwork and skating, which is totally fine; it’s worth the sacrifice to be able to train and go to competitions, because those are amazing opportunities that I wouldn’t give up. On the weekends, I try to hang out with friends and have some ‘me’ time.”

Another new challenge: overseeing her own training. With ice time at Lynah generally booked up by hockey and phys ed classes, Chen practices solo at a rink in nearby Lansing and works out at a twenty-four-hour gym off campus. “I don’t have a coach with me, so I’ve been coaching myself,” she says. “It was tough since I was so used to a coach being on top of me and telling me what to do—having that pressure of somebody watching. But as long as I have a goal to work toward, I’m able to self-motivate.”

The effort has paid off: after missing the 2019 nationals due to the foot injury, Chen—who’d earned bronze in 2018, the year after her championship win—again landed on the podium in 2020. She took home pewter (fourth place), her fourth career medal at senior nationals—one of several competitions in the U.S. and abroad she entered her freshman year, thanks in part to professors who helped her catch up on any missed material. Now, she has an eye on an Olympic return at the 2022 Games in Beijing, China. “This year was definitely a struggle to balance school and training, but I managed to skate pretty well, especially coming back from a stress fracture,” says Chen, who kicked off the 2019–20 season by earning silver at the Philadelphia Summer International. “It was tough at the beginning, but in the end I felt like I accomplished a lot, and it’s definitely doable as long as I’m smart about everything.” 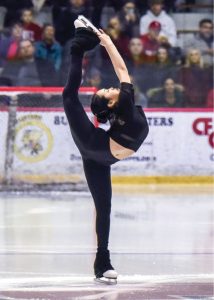 Ask Chen to name her career highlights, and she’ll mention not just winning championships and competing on Olympic ice, but something that’s close to Cornellian hearts: skating in Lynah Rink. In late February, she performed one of her exhibition programs between periods of a game against St. Lawrence, to a roaring crowd of hockey Faithful. “That was one of the most incredible experiences—it was so much fun,” she recalls. “I’ve done a lot of shows, but the energy was incredible. I thought hockey fans and college students might think figure skating is dumb, but as soon as I got on the ice they were cheering so loudly for everything I did. It felt amazing. That was an experience I’ll never forget.”