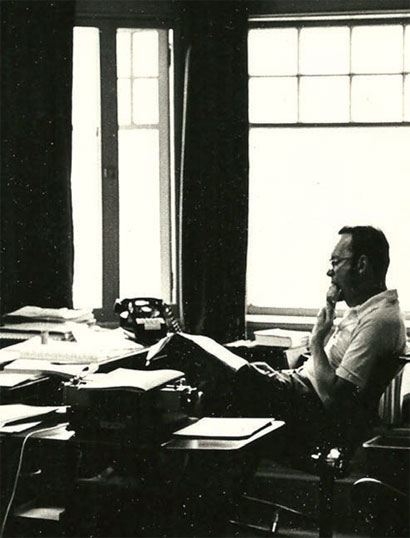 Cornell has lost an extraordinary alumnus—a man whose devotion to the University was exceeded only by his devotion to the truth in reporting about it. John Marcham ’50 served as editor of the Cornell Alumni News from 1961 to 1991, with a brief detour in the mid-Sixties, when he worked in university relations during the Centennial celebration. After a few years in Day Hall, he return
ed to the magazine—gladly, he once told me. Journalism, he knew, was his calling.

John grew up in Ithaca, where his father, Frederick Marcham, PhD ’26, was a legendary professor of history and the boxing coach. (Fred Marcham was also the mayor of Cayuga Heights for thirty-two years; the village hall is named in his honor.) John was immersed in the life of Cornell from an early age, roaming the campus and exploring its many resources, educational and geographical. He grew up surrounded by students and faculty, and by the time he was an undergraduate John probably knew more about the University’s history than just about anyone, with the possible exception of Morris Bishop ’14, PhD ’26 (who literally wrote the book on the subject).

After graduating, John went to New York City to work as a reporter for Life magazine. He married Jane Haskins Marcham ’51 the June after she graduated, and she followed him to the city, taking a job at Women’s Wear Daily. But the pull of Ithaca was strong, and after a decade away, they came back home. He served as city editor of the Ithaca Journal—where Jane would also work as a longtime reporter and editor—before taking over the Alumni News. They bought their house on East Buffalo Street in 1966 and raised three children there: David, Bruce, and Sarah, the mother of their two grandchildren. As David recalled shortly after his father’s passing, one of John’s favorite campus habits was taking a break from work at the magazine—back when it was located in Alumni House—for a good game of pinball in the Noyes Lodge snack bar.

As the editor of this magazine, John insisted on unbiased, accurate reporting on Cornell, free from public relations puffery—an editorial position he called “sympathetic objectivity.” He wrote that “we try to understand and explain a grand and occasionally puzzling institution, a mix of mighty scholarship, idealism, and youthful tomfoolery.” He was not afraid of controversy and sometimes incurred the ire of administrators and alumni alike, most notably in his comprehensive and unflinching coverage of the Straight Takeover in 1969. He set a high standard for those of us who followed him.

After his retirement, John remained active in the community and in alumni affairs, and edited many books on local history and other topics. He regularly attended concerts, sporting events, and Reunion. He was a fixture at the CACO Midwinter Meeting and its successor, the Cornell Alumni Leadership Conference. He was also a regular visitor to the CAM offices, sometimes on class business or to do research in the back-issue archive, sometimes just to talk. I had the good fortune to converse with John on many occasions, and he shared a wealth of information, insights, and opinions. He was quick to praise good work, but unafraid to be critical or to ask penetrating questions—a journalist to the end.

Although John’s health was not good for the past few years, especially after he took a fall in his yard, he was always available to answer a question, or to fill in the backstory for an article that had been written years ago. He never bothered with e-mail, so you had to call him—which was good, because it often spurred a conversation. He remained a faithful reader of CAM and had many good suggestions for articles and improvements.

Last summer, I was touched that John made a point of coming to my retirement party, and his kind remarks about my tenure as the editor and publisher were a high point of the evening for me. When colleagues and friends congratulated me on my fourteen years at CAM, I just pointed at John and said, “Well, I lasted about half as long as he did.” And I can only hope that I did my job half as well.