Imagine a world where all the buildings are designed by one person, none is more than fifty years old, and many are gleaming white—where every structure has clean lines, meticulous detailing, and light-filled interiors. Improbable in real life, perhaps; but such a place exists in miniature. Welcome to the Richard Meier Model Museum, a mini-metropolis consisting of scale models of buildings designed by architect Richard Meier 56, BArch ’57, and his firm. Best known for high-profile projects such as the Getty Center in Los Angeles, the Manhattan-based Meier has won just about every prize in his field including the Pritzker, architecture’s highest honor. 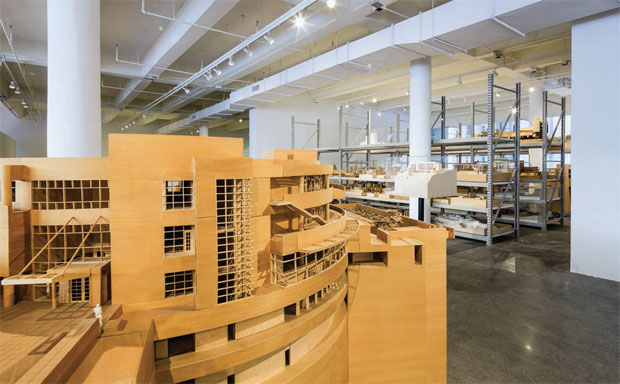 Model home: Located in Jersey City, the Richard Meier Model Museum offers a rare look into the creative process of an architectural superstar.

While many architects eventually discard the scale models they create—if they still build them at all—Meier has saved practically all of his. Last year he brought some 300 of them to his home state of New Jersey and put them on display in a 15,000-square-foot exhibit space, part of the sprawling Mana Contemporary cultural center that’s helping to rejuvenate Jersey City.

The museum, which is open by appointment, is something of a first; no other American architect has a permanent exhibit space such as this. Meier, who maintains a studio there, comes about once a week to work and meet with visitors, who range from students to prospective clients to general architecture buffs. On display is a universe of Meier’s making—from houses to high rises, churches to museums, all reflecting the architect’s distinctive style. Part workshop, part design studio, and fifty years in the making, this is Modernism in miniature; it’s a three-dimensional essay on design by one of America’s foremost architects. For Meier, who turned eighty in October, it’s both a homecoming of sorts and a walk down Memory Lane. “We were storing all these models and I thought they should be put on display,” he says. “It makes me very happy to go there and see the models together.” 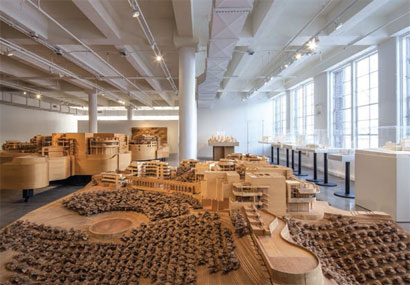 With the advent of computer-aided design, model making has become something of a lost art, as architects increasingly employ sophisticated graphics including “flyover” videos that can show a proposed building from all directions. Meier, by contrast, still believes in scale models; he notes that many of the young architects he hires are required to spend time making models before they can design a building. “Model making is an important part of the design process,” he says. “It’s not static. It’s ever changing. You can see buildings in relation to one another, see the play of light on a building.” On paper or a computer screen, he says, “you can’t show it in the same way.”

The museum’s models depict structures—built and unbuilt—that Richard Meier & Partners designed from the mid-Sixties to the present. Most of his best-known works are included. The Getty is represented by several models, the largest of which is as big as a living room and had to be lifted in through a window. There’s the High Museum of Art in Atlanta; Jubilee Church in Rome; the Atheneum in New Harmony, Indiana; the Arp Museum in Germany; the Perry Street condominiums in Manhattan; an entry for the World Trade Center design competition. About a third of the pieces are study models, used by Meier and others to explore spatial relationships and other factors. The rest are presentation models, built to show to clients, enter a competition, secure funds, or market a project.

In addition to Weill Hall, the Cornell life sciences building that opened in 2008, Meier designed two projects for the Ithaca campus that were never realized: an alumni and admission center overlooking Fall Creek and a serpentine student housing complex for North Campus. Of those, a model of the housing project is on display, hanging on a wall off the central gallery. The museum’s oldest model is of the Smith House in Darien, Connecticut; one of Meier’s early white buildings, it garnered critical acclaim that led to much of his subsequent residential work. Considered one of the collection’s gems, it’s the only model on view that Meier made with his own hands.

For Meier, who is still busy with commissions, these are souvenirs of a long and productive career. As he notes in a film about the museum: a scale model is one element of a project that the architect gets to keep. “Once the building is completed, the client has the building,” he says. “We have the model as a remembrance.”