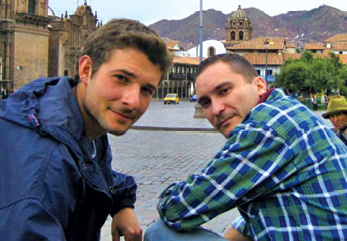 Human Ecology student Jasmine Robinson ’17 grew up outside Oklahoma City, the daughter of a nursing professor and an IT specialist who saw themselves as citizens of the world. Her parents hosted dozens of international exchange students, enrolled her in German language camp every summer, and traveled with her as often as they could, including a memorable trip to Morocco her senior year of high school. “They realized that we’re part of a global community,” says Robinson, who took that philosophy with her to Cornell.

On the Hill, Robinson has studied Arabic, is majoring in Human Biology, Health & Society, and is earning a minor in global health—the last requiring an overseas trip. So, hoping to put her Arabic to use, Robinson returned to Morocco, where she spent the summer of 2015 in the capital city of Rabat. Most mornings, she would take a shared taxi—“imagine six people squeezed into a small sedan”—to a preschool where she volunteered with underprivileged children. She spent her afternoons assisting with HIV screening at a reproductive health clinic before coming home to a hot meal prepared by her host family. “I really liked the idea of being of service,” Robinson says. “I felt like I was much more than a tourist.”

Robinson’s experience was organized through UBELONG, a travel company founded by Cedric Hodgeman ’04 and Raul Roman, PhD ’04. Since 2010, UBELONG has helped some 5,000 people—including students, corporate groups, and adults traveling on their own—do volunteer work in twelve countries on five continents. On trips lasting from a week to six months, they have helped out on an organic farm in Laos, fought malaria in Ghana, and supported survivors of sexual abuse in Peru, among dozens of projects organized in partnership with local non-governmental organizations. Because the focus is more on volunteering than on sightseeing, and because travelers lodge with host families or in simple guesthouses, trips tend to be cheaper than through similar agencies, generally costing a few hundred dollars for a single week and as little as about $100 a week for six-month stays. (The company also offers non-volunteering educational trips, called “expeditions”; for example, a ten-day tour of Morocco in 2017, entitled “The Arab World Beyond the Headlines,” runs $1,100 per person, not including airfare.) 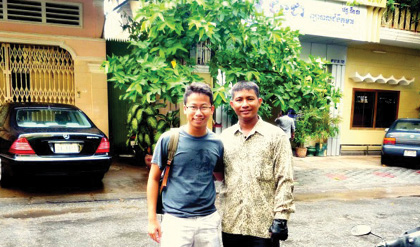 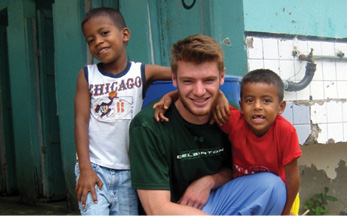 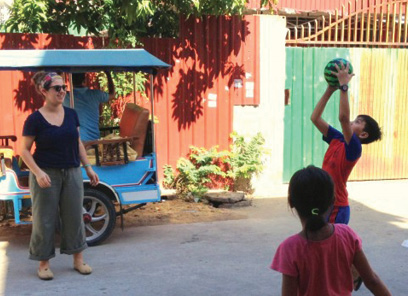 As Roman explains, the name “UBELONG” is a shortened version of the phrase “you belong.” “When we say that, we are talking to the thousands of people who yearn to serve and get involved in international cooperation efforts but struggle to find the right opportunity,” he says. “We aim to offer that to them.” Adds Hodgeman: “The vision was always pretty simple: to make it easy for people to get out there into the world and do good.”

Hodgeman and Roman met at Cornell, where Roman, a native of Spain, was Hodgeman’s TA in a business class in CALS. After the course was over (“He got an A-plus,” Roman says), they ran into each other at Rulloff’s, where they struck up a friendship based on a shared interest in international relations—and similarly intense personalities. Four years after graduation, Hodgeman, having recently quit a job in real estate development, was volunteering in Cuzco, Peru, when Roman flew down for a vacation. On a Saturday morning stroll, the pair got to talking about how they might use their love of travel to start a business. “We saw a need in the space between the Peace Corps—an awesome program, but it takes two and a half years, you have to be a U.S. citizen, it’s very controlled, very rigid—and, on the other end, all these tourism companies that are flexible but not genuine,” Hodgeman explains. “You know, ‘Let’s go to these orphanages for ten minutes and take pictures.’ ”

As UBELONG grew over the next few years, the founders remained conscious of that pitfall. So-called “voluntourism,” which in recent years has ballooned into a $2 billion industry, gets its share of criticism from scholars and journalists. They argue that, at best, service trips are more about making Westerners feel good about their vacations than about making a difference—and that, at worst, they can cause local communities to become dependent on handouts. “We get asked about that a lot,” Hodgeman says. “I think you can avoid it by having an understanding of what it is that [local partners] are looking for and how exactly we can support that. That can be as easy as just being in the country and observing what the needs are and starting a conversation.” For volunteers, the key is to tamp down arrogance, he says, and to realize that the relationships you are building will, ideally, go both ways.

That was true for Lauren Tweel ’16, who volunteered with UBELONG to teach English at a school in Cambodia for nearly a month the summer before her junior year. “I thought was I doing a selfless deed by spending my summer vacation volunteering, but in the end it turns out that the children were the truly selfless ones,” says the former mechanical engineering major. “They gave me their love, and all I could do was give them a language.” Julia Hollreiser ’15, who spent a week during her final winter break as an undergrad volunteering at a senior citizens’ center in Costa Rica, still keeps a memento of the relationships she forged during her trip: an intricate, pen-and-ink drawing that an elderly man named Luis gave her on her last day. “I framed it when I got home,” says Hollreiser, an ILR alum. “I keep it in my room as a reminder that, even though I was only there a week, I made connections and made a difference.”

For Robinson, the timing of her trip was especially fortuitous when it came to meeting local needs. Her visit to Morocco included the month of Ramadan, when observant Muslims refrain from food and drink from sunup until sundown. When Ramadan falls during the long, hot summer, it can be even more taxing—and that’s where cultural differences proved to be a boon. “It was extremely hot, 100 degrees every day,” says Robinson, who as a non-Muslim was able to eat and drink during daylight hours. “At the school, the teachers would get exhausted, so it was especially helpful for me to pitch in.” Back in Ithaca, Robinson is looking ahead to a career in medicine, and she hopes to travel and volunteer with UBELONG again. “It attracts people who are excited about getting up every day and going to their projects,” she says. “I guess I’ll never know how much of a difference I made in the long term—but I did have an immediate impact on the people I worked with.”