On June 1, 2008, Chris Marshall became the leader of the Office of Alumni Affairs—and he immediately shook things up. Chris came to Cornell from Lehigh University, his alma mater, where he had been the executive director of the alumni association for the past seven years. As Cornell’s associate vice president for alumni affairs, he reshaped his operation from top to bottom, adding personnel in areas like metrics and social media and revamping moribund programs and procedures.

Under Chris’s leadership, the CACO Mid-Winter Meeting was expanded to become the Cornell Alumni Leadership Conference, with much greater attendance and a wide-ranging program that em­braced the interests of all alumni leaders, from recent graduates to centenarians. Homecoming became a bigger event, spanning several days and including a parade, concerts, and even a fireworks show. Reunion reached new heights, and Cornell clubs around the world got stronger support. Chris also served as a member of the Cornell Alumni Magazine Committee, attending our meetings and offering insights and support. His leadership was widely hailed, internally and externally, for boosting alumni enthusiasm and engagement.

But as much as Chris enjoyed what he called his “dream job” here in Ithaca, his connections to Lehigh and Pennsylvania kept tugging at him. This fall, after much consideration (and anticipating the birth of a daughter), he decided it was time to go home. In early November, Charlie Phlegar, vice president for alumni affairs and development, announced that Chris would be leaving Cornell to move to Bethlehem, Pennsylvania, where he will have a position with the philanthropic management firm GG+A. His colleagues said goodbye at a farewell reception in Friends Hall on November 16. 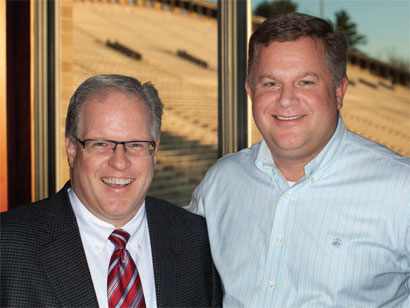 Chris’s replacement as associate VP for alumni affairs is Jim Mazza ’88. An Ithaca native, Jim traces his connection to Cornell to 1979, when—as a high school junior—he played piano at a reunion reception. While he was studying communication in CALS he worked as a reunion clerk, and two years after graduating he returned to take a staff position in the Division of Alumni Affairs and Development. He has remained there since, working in an ever-ascending series of AA&D positions and eventually joining the leadership team, where he served most recently as associate vice president of colleges and units.

Jim’s smiling face is a familiar sight to many Cornellians, and his outgoing personality and strong connections to the alumni community should serve him well in his new position. I met Jim soon after I came back to Cornell in 1999, and I look forward to working closely with him in his new position. I will miss the conversations I had with Chris Marshall, and I thank him for his steadfast support of CAM over the past four-and-a-half years—but I’m confident that the important work he began in the Office of Alumni Affairs will be carried forward and enhanced by his successor.