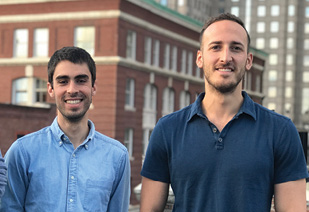 As an undergrad, Jake Reisch ’15 launched a company that rents wireless headphones for “silent discos”—events where dancers can listen to music without disturbing the neighbors. Within a year, Party Headphones was a six-figure business. But Reisch realized the technology could go beyond the club scene: it could help older adults who are hard of hearing. He teamed up with two friends, Devin Jameson ’16 and Matt Reiners, to found Eversound, a Boston-based business that provides specialized headphones for use at events like movie screenings, lectures, and bingo. “It’s been amazing to see people’s faces light up when they can finally hear clearly,” says Jameson. “Many people have told us this is the first time they’ve been able to truly participate socially in years.”

Eversound’s system is currently used by about 36,000 people in 300 elder care residences, retirement homes, and other facilities, including three of the country’s ten largest senior living chains. The company has raised $5 million in funding (including from Red Bear Angels, a Cornell-oriented venture capital fund), with another round expected by year’s end to help expand to two million users by 2020. Forbes has taken note, too, naming the trio to its annual “30 Under 30” list of the world’s brightest young innovators for 2018.

The three founders, who worked together at Party Headphones, were inspired to start Eversound after Reisch and Reiners—childhood friends whose fathers are Cornell horticulture professors—watched loved ones move into senior living; Jameson also saw the impact hearing loss had on his ninety-five-year-old grandmother. They learned some surprising statistics: according to the National Institutes of Health, nearly 25 percent of those sixty-five to seventy-four, and half of those seventy-five and older, have disabling hearing loss. Among adults over seventy who could benefit from hearing aids, fewer than one in three have ever used them. Says Reisch: “This was a chance to make a big impact.” 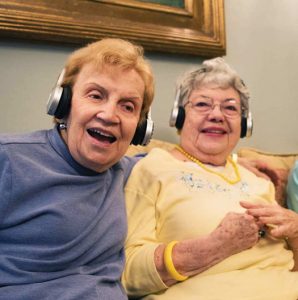 Residents of a senior living facility using the Eversound headphones.Provided

Before launching Eversound in 2016, the three nurtured the idea at Cornell’s eLab program for accelerating startups, with Reisch visiting 250 senior living communities for research. His first visit was to Kendal at Ithaca, a retirement community near campus whose residents include numerous alumni and former faculty. There, he met Jim Stouffer, professor emeritus of animal science, who helped them assess senior needs. They also sought assistance from occupational therapists, gerontologists, and audiologists to tweak the headphones’ design: the devices amplify frequencies associated with natural hearing loss, are compatible with hearing aids, and—given that users may suffer from arthritis or other dexterity problems—have large control knobs that are easy to turn. As Eversound notes on its website, when the company and a senior living chain teamed up for a six-month study on the use of its headphones at two New England facilities, they found that resident engagement in activities (measured by surveys and observation of facial expressions) had increased by 28 percent. “There’s this misconception that older adults don’t want technology, but it’s really that people aren’t designing the right products and services for older adults,” says Reisch. “Maybe they need to visit their grandparents a little more.”

2 thoughts on “Listening In”