Toward the end of 2016, Orlando Soria ’04 went through a painful breakup with his live-in boyfriend and got laid off from his job as an interior designer to the stars. So the style maven and lifestyle guru—who made a name for himself as the wacky assistant on an HGTV show—spent last year trying to regain his footing, both emotionally and logistically. “I had to find and furnish a new place, move, and figure out how to make money after losing a job where I was making a decent salary,” says thirty-five-year-old Soria. He also wrote his first book, Get It Together! An Interior Designer’s Guide to Creating Your Best Life. Published this spring, it features design ideas, DIY tutorials, playful doodles, and photos of attractive spaces he’s styled, as well as his musings on design, life, and love—and why no one should take any of it too seriously. “Last year was a mess,” says Soria, chatting with CAM in the living room of his eclectic and comfortable West Hollywood apartment, outfitted with vintage art-deco-style sofas in off-white and deep teal, a massive stone coffee table, pink accent pieces, and a tall, wooden, cactus-like sculpture in one corner. “But my loss is kind of the reader’s gain, because what I was going through made the book so much more real and funny and self-deprecating.”

Self-deprecation—of the laugh-out-loud variety—is intrinsic to Soria’s voice. In his blog (dubbed Hommemaker, a play on “homemaker” using the French word for “man”) and on his Instagram feed, he shares posts, photos, and short videos he broadcasts daily to his 131,000-plus followers that show him poking fun at himself and his dating life—sometimes while lying atop a pile of unfolded laundry. In his book, he cuts to humor straightaway, in the dedication: “For my boyfriend. Just kidding I don’t have one.” Toward the end he includes an epic DIY fail, describing his efforts to make a rope doorstop—which, he writes, devolved into “one of the most grueling and humiliating experiences of my life.” Rather than cut it out of the book, Soria left it in—along with the supply list, which includes ten feet of sisal rope, a glue gun, and “literally zero taste.” He retained the anecdote not just because it was funny, he explains, but because it demonstrates a point central to his design philosophy. “In order to have the beautiful house that you want,” he says, “you have to be willing to try things and not be scared of screwing up.”

That ethos extends to Soria’s career path, which was dotted with false starts and lucky breaks. He grew up in a little cabin with his parents and two older siblings in Yosemite National Park—a community of fewer than 1,000 full-time residents—where his father was a dentist and his mother a teacher. His early years were idyllic, offering ample opportunities for creativity, like painting and decorating his bedroom for the first time at age seven (Mickey Mouse figured prominently). But then came his teenage years, when he often felt physically ill from the strain of attending high school in a small, conservative, economically depressed central California town—a two-hour bus ride from home, each way—where many people were openly racist and homophobic. “I hated my life,” says Soria, noting that he couldn’t wait to go away to college. When he arrived at Cornell’s art-themed Risley Residential College, he finally felt at ease. “Right away,” he says, “I realized I’d found like-minded people that I could relate to.”

A double major in government and fine arts, Soria had early undergrad dreams of becoming a lawyer, but by graduation he’d switched his focus and enrolled in an MFA program at Penn in hopes of becoming an art professor. When he realized that academia wasn’t the right fit, he pivoted to graphic design, and later to set and production design; he moved to L.A., where he worked on music videos and independent films. Several years out of grad school and still adrift, Soria applied for an assistant position through an entertainment job website on a whim. When he showed up for the interview, there was a twist: whomever interior designer Emily Henderson hired would have an on-camera role on her HGTV show, “Secrets from a Stylist.” Despite his lack of design experience, Soria got the job. “It was just kismet that we met,” Soria says. “It totally changed my life.” 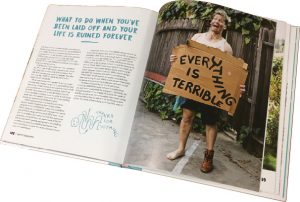 The show ran for twenty-six episodes over two seasons, ending in 2011. During that time, Soria refined his aesthetic to what he calls the “California coastal and eclectic” style he favors today, with “a slight Japanese influence”—likely because his mom spent her childhood there and featured Japanese furnishings in their family home. The HGTV exposure also gained Soria enough of a following to launch a successful interior design business with his on-air boss when the show wrapped. Later, he was hired as the West Coast creative director for an interior design start-up called Homepolish; before he was laid off in 2016, Soria’s primary responsibility was to work on celebrity projects, outfitting spaces for the likes of Oscar-winning actress Anjelica Huston and a former Miss Universe.

As Soria’s online presence grew, he started sharing more personal details on his blog, including his musings on aging, fame, and heartbreak. When his boyfriend suddenly left him in late 2016, he wrote several raw, confessional posts about the breakup and its aftermath. In one dated Valentine’s Day 2017, he opens with a photo of the Silver Lake condo they’d painstakingly renovated together, talks about why he’s always had a passion for beautifying his living spaces, shares details of their love story—and ends with a poignant shot of his moving boxes. “Each little design element I noticed felt like a little piece of care I’d given to the space,” he wrote, “a small offering of love that was now being rejected.”

Recently, Soria’s blog has featured a series entitled “Dating Sucks,” addressing such topics as “How to be a good friend during a breakup”—and pondering eternal questions like, “Is your date a lunatic?” He notes that when he writes a heartfelt blog post or shares a less-than-perfect photo or confessional video, he always gets a big response from readers. “I think people are hungry for these raw, unfiltered stories,” he says. That’s why, at least for now, he’s decided to stop working with private design clients in favor of sharing more of his stories with the masses—both online, through social media, in his book, and possibly in another design-focused TV show. “So much of what’s shared online is this aggressive, superficial stuff that makes people feel really lonely,” Soria says. “I want people to feel less alone having seen what I wrote or posted. I want to tell stories that other people might think are too personal or feel are too uncomfortable to tell.”