Canlis, the venerable Seattle restaurant now led by a pair of Cornellian brothers, opened its doors in 1950, but its roots stretch back to the beginning of the century—when their great-grandfather, a Greek immigrant named Nicholas, left the island of Lesbos in search of opportunity. He made it to Turkey—family lore says he swam all the way, though a boat may have been involved at some point—and hitchhiked to Cairo. There, he got a job in a luxury hotel whose guests included President Theodore Roosevelt; recently out of office and provisioning for a 1909–10 African safari, he invited the young Canlis along as a cook and steward. After the yearlong expedition, Nicholas emigrated to America and made his way to California, where he opened the family’s first restaurant.

More than a century later, his great-grandsons Mark Canlis ’97 and Brian Canlis ’01 oversee one of the Northwest’s most celebrated fine-dining establishments. Housed in an iconic building of glass, wood, and stone—with signature outward-slanting windows and dramatic views of the city, the Cascades, and Lake Union—Canlis is both a Seattle institution and a major player in the world of contemporary cuisine. A current nominee for the James Beard Award for outstanding restaurant in the U.S. (the ceremony is scheduled for May 7), Canlis was named one of the nation’s top twenty restaurants by Gourmet in 2006, got a “best new chef” nod from Food & Wine in 2011, and last year took home a Beard for best wine program. As Esquire put it last fall, Canlis “is that rare breed: it’s an older American restaurant that has managed to surge into a second life instead of being disrupted and derailed by the bombardments of change.” Brian and Mark, the magazine noted, “turned a fussy-uncle Seattle institution into one of the coolest places to eat on the West Coast.” 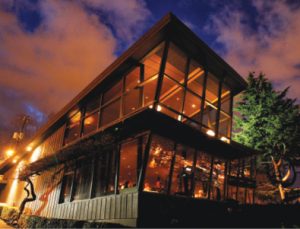 The Restaurant’s building, whose slanted windows allow diners to see the view rather than their own reflections.Canlis

But as the brothers stress, they haven’t reinvented the restaurant so much as nurtured its continuing evolution; they aim to honor its history while keeping it fresh and relevant. Early this spring, the seasonal, four-course prix fixe dinner menu (priced at $115) included such fare as halibut poached with kohlrabi and chrysanthemum, and handkerchief-shaped pasta with rabbit, parsnip, and lovage—but for diners in the know, they’ll gladly serve up beloved Canlis classics like teriyaki beef, Dungeness crab legs, and crème brulée. There’s still a piano player tickling the ivories; listen closely, though, and you’ll realize he’s playing David Bowie or Radiohead, not Frank Sinatra. “We’re very intentional about the music representing who we are as a company,” Brian notes. “The surprising juxtaposition of new and old creates a really special restaurant. It’s got an incredible energy.”

Another item on the recent menu pays homage to Steak Pierre, a Canlis favorite. (Founder Peter Canlis, the brothers’ grandfather, named the dish after himself.) The classic version was a beef tenderloin topped by a sauce made of Worcestershire, butter, vermouth, lemon juice, and garlic. Current executive chef Brady Williams—a Beard finalist for rising star in 2017—tapped Peter’s recipe to design a new dish, a malted pancake with fermented cabbage and the traditional Pierre sauce. “The food has so much soul, because it comes from so much history,” says Mark. “It looks completely contemporary, seasonal, and fresh, yet much of it has fifty, sixty, seventy years of story behind it. I don’t know of another restaurant in this country that’s doing what Canlis is—a restaurant from 1950 that’s still trying to be the best in America.” 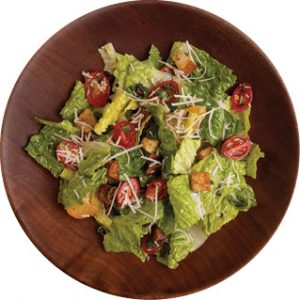 Take the signature salad, the only item that has perennially appeared on the menu—and a dish special enough that the New York Times published its recipe a few years ago, calling it “a revelation.” Based on a salad made by Peter’s mother, it includes romaine lettuce, cherry tomatoes, bacon, lemon juice, fresh oregano and mint, Romano cheese, and a coddled egg. “The whack of acid in the lemon, the bacon fat, and the high note of mint—it’s just crave-worthy,” says Mark. “I think we’re all chemically addicted to it.” Plus, he says, “we think it’s cool and funny to have a tossed salad on a fine-dining menu. We could replace it with something super slick and Instagram-worthy, but we have guests who have been dining here since we opened—people whose memories have been firmly established at this place and with this food. We use that salad as a way to connect.”

Peter Canlis—Nicholas’s son—came to Seattle via Hawaii, where he’d cooked for thousands of troops as a USO chef following the attack on Pearl Harbor. After the war, he opened a restaurant in Waikiki that, Mark says, “pushed food and service in new ways,” such as pooling tips and serving in teams. But that establishment was owned by investors, and Peter wanted to strike out on his own—relocating to Seattle and pursuing his novel notions of what fine dining could be. “Our grandfather was obsessed with this idea that you were dining in his home,” Brian observes. “Fine dining of the day was very French, white, stuffy, formal; pat the corners of your mouth perfectly with your napkin, angle your pinkie. It was very upper-class elite, often in grand hotels. He wanted to have the same standards of excellence, but for it to feel like you’re coming to his house for an awesome dinner party. Instead of French waiters, it was all Japanese women wearing kimonos. Instead of the kitchen being out of sight and out of mind, it was open to the dining room. He celebrated the chef way before his time.”

After Peter died in 1977, his son and daughter-in-law took over, running it for three decades; two of their three sons, Brian and Mark, picked up the reins in the mid-Aughts. Both had attended Cornell on ROTC scholarships, earned degrees from the Hotel school, and served in the Air Force after graduation. (Mark was in aircraft maintenance with a Special Operations unit out of Florida, while Brian’s assignments included working in protocol at Andrews Air Force Base, where he frequently escorted President George W. Bush off Air Force One—to the delight of his parents, who’d glimpse him on CNN.)

At Canlis, Mark serves as CEO—primarily addressing big-picture issues—while Brian is president. “I lead our weekly strategic meeting; quarterly offsites or annual retreats, that’s Mark’s world,” Brian explains. “He’s a little more guest-faced than I am. I’m more in the office with the numbers.” They’ve put together an advisory board for the restaurant, an industry brain trust that includes two of their close friends from Cornell: Shake Shack CEO Randy Garutti ’97 and Will Guidara ’01, co-owner of Manhattan’s celebrated Eleven Madison Park. (Canlis’s unofficial sister establishment, Eleven Madison Park was named number one by the World’s 50 Best Restaurants organization last year.) “Canlis is one of the greatest restaurants on the planet, period,” Guidara says. “Every region needs a restaurant that defines it, and Canlis is definitely that for the Pacific Northwest. It should be on the bucket list for anyone who has a passion for restaurants, because it’s one of the most special places out there. I often tell the people who work for me that it’s our responsibility to create magical worlds in a world that needs more magic—and Canlis is one of the most magical worlds I’ve ever found.”