Conducting class is just hitting the downbeat when music professor Cynthia Johnston Turner gets a cell phone call on her Google Glass. She turns to her teaching assistant, Tyler Ehrlich ’14, and says: “It’s your mother.”

Ehrlich is working with Turner to develop an application that will embed musical scores into the Glass—letting conductors see their sheet music without looking down at the podium—and their phones are tethered to expedite messaging. After a moment of puzzlement, he replies, “Hi, Mom.” Students laugh. “Your mom says she loves you,” Turner tells him. He smiles. “Love you, too, Mom.” 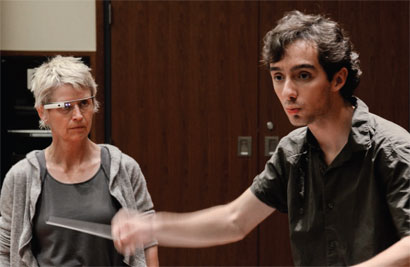 Turner slides a finger along the right stem of her glasses, ending the call. “This,” she tells her students, “is the weirdest thing that’s ever happened.”

Weird, yes. But now that Glass is in the classroom, the unexpected is the norm.

Turner is best known as the energetic director of Cornell’s wind ensembles, an award-winning teacher, and champion of new music. Now she’s adding Google Glass-master to her portfolio.

The journey started in July, when Turner’s response to a Google contest on Twitter (“#ifihadglass”) caught the attention of developers at the Internet megacorp. The maestra’s tweet: “I’d use it in the music studio, rehearsal room, and classroom to record conducting students and give immediate feedback!”

The now-famous Glass is Google’s digital eyewear, featuring a voice- and touch-activated webcam/cell phone. Beta-testers like Turner—dubbed “Explorers,” they each shelled out $1,500 for the privilege—see a small computer screen in the right lens that displays text messages, e-mail, and other data. “It was a brilliant marketing strategy,” Turner observes. “I’m paying Google to advertise their product.”

A month into the semester, she was already reaping the rewards of her investment. Because conducting is such a physical art, students greatly benefit from seeing their performance on the podium, and video is standard practice. The glasses, Turner says, save considerable grunt-work at the computer, and students appreciate the instant gratification of viewing their lessons just hours later. “What we do today we see tonight,” says Steve Helmer, PhD ’80, a professor emeritus of art history taking Turner’s class. “It really helps to speed up the learning process.” When Turner uses a tripod-mounted camera, by contrast, its fixed viewpoint is limiting and the uploading process can be tedious. “Glass is very cool,” says Jacob Cohen, a sophomore majoring in government and music. “We get these awesome point-of-view videos where we can see ourselves like it was with [Professor Turner’s] own eyes.” Students show no signs of being Glass shy. Conducting student Rain Zhou, a sophomore engineer, much prefers Glass to a standard camera. “There is no anxiety of being filmed,” Zhou says, “since it looks merely like a pair of glasses.”

After shooting video, Turner receives an e-mail notifying her that it’s ready. She uploads it to her online student community, which the genial group allowed to go public following a request from Google. Now anyone can join the community and see videos of the conducting class—including a foray outdoors where Turner had her students practice using bubble wands in place of batons. But as Turner has learned, shooting clear video with Glass is a skill of its own. Her teaching style is dynamic, and keeping her head still can make for an almost-robotic affect. “I’ve had to learn to curb my enthusiasm,” she says with a laugh.

This fall, Turner is also conducting three days a week at Eastman School of Music in Rochester. Traveling with Glass helps her juggle a jammed schedule and stay close to the team of faculty, staff, and students she recruited to assist with her own learning process. She’s also keen on advancing the technology for other conductors, teachers, students, and performers. (Ehrlich, for instance, is developing the embedded score application as part of his senior honors thesis.) Turner’s other ideas for Glass include live-streaming video during concerts, giving audiences a conductor’s-eye view.

But recording audiences could raise the sort of privacy concerns that have dogged Google Glass since the project was first announced. While Turner acknowledges there are privacy challenges inherent in such technology, she notes that “cameras are everywhere”—and students, especially, are open to innovation. “I know some people are frightened by it, but I’ve received only one negative response so far,” says Turner, who communicates regularly with other testers via online communities. “I’m looking at Glass from the viewpoint of someone who wants to know, ‘What makes our lives better as conductors, performers, and educators? What will make my students’ lives better?’ I’m not afraid of technology. I embrace it. Anything that helps me remember everything I’ve ever read, or the names of all of the people I meet, is a good thing, in my view.”

Privacy issues aside, Glass has had some technical downsides; the prototype is undergoing constant software upgrades and occasionally fails. Early adopters expect glitches, and Turner, who possesses what the industry terms a “high user IQ,” is an agile tester. Her first headset was a dud and Google sent her a free replacement. This fall—on the same day she intercepted the call from Ehrlich’s mother—her second pair went on the fritz; halfway into class the unit overheated. Turner didn’t miss a beat, using the moment to discuss fermatas—bird’s-eye symbols in music scores that indicate a held note. She removed the Glass, plugged it into a wall socket, grabbed a piece of chalk, and continued the lesson the old-fashioned way. “I wonder,” she said, rubbing her right temple, “if this is frying my brain cells.”