When Americans contemplate the contents of their local landfill—if they think about it at all—the images that come to mind likely involve piles of rotting food, some greasy pizza boxes and broken toys, discarded wrappers, old appliances, maybe plastic containers that didn’t make it into the recycling bin. But as Big Red researchers point out, there’s a major contributor to the waste stream that most of us don’t even think about: our old clothes. 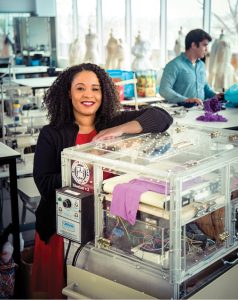 According to figures from the nonprofit Council for Textile Recycling, the U.S. generates some 25 billion pounds of post-consumer textile waste each year—a category that includes not only clothing but footwear, accessories, bedding, towels, and more. Of that, just 15 percent is recycled or donated for reuse, with the vast majority going straight to the dump. The resulting detritus comprises a whopping seventy pounds per person annually. “In this country we buy a lot, and we don’t necessarily buy quality—and then 85 percent of that ultimately ends up in the landfill,” says Human Ecology grad student Kat Roberts. “So we’re talking about tons and tons of waste.”

One of Roberts’s mentors on the Hill—Tasha Lewis, PhD ’09, an associate professor of fiber science and apparel design—has been focusing her research on ways to cut down on that waste, and to make the fashion industry more sustainable overall. In recent years, Lewis has published papers on such topics as ways to promote “slow fashion” (which, in contrast to trendy and disposable “fast fashion,” involves the creation and marketing of high-quality, long-lasting items) and creating a zero-waste model for apparel reuse and recycling. “The ‘circular economy’ is the idea that you can take waste and turn it into something renewable, something that can be used again,” says Lewis, herself a designer who has made clothing from fabric reclaimed from castoff apparel. “That’s where my research is—trying to understand how we can be more circular in how we think about our fashion when it gets to the end of its life.”

A major reason why clothing ends up in landfills is that it’s increasingly seen as cheap and disposable, representing a dramatically lower portion of our budgets than it once did: according to the U.S. Bureau of Labor Statistics, in 1901 the average household spent 14 percent of its income on apparel, while nowadays it’s 3 percent. The good news is that clothing is more affordable than ever, so even Americans of limited means can have large and varied wardrobes. The bad news is that a $9 top or $15 pair of jeans—almost certainly made overseas; Lewis notes that some 97 percent of apparel sold in the U.S. is imported—probably isn’t designed to last. When our cheap clothes get worn or damaged, we’re more likely to toss them than mend them; if they’re no longer fashionable or don’t fit, items that cost barely more than a sandwich are easy to jettison. “We’ve gotten used to seeing a lower price point,” says Lewis. “We’ve disconnected on value, quality, and cost, and what you get for that.”

Among Lewis’s research projects is the development of a machine, known as the Fiberizer, that shreds old garments into a fibrous mass that can be reused in a variety of industries, from apparel to home décor to gardening. As one of her collaborators, Anil Netravali, the Jean and Douglas McLean Professor in Fiber Science and Apparel Design, explains: “It breaks the fibers into pieces so small that they can’t be used directly to make yarn. But even then there are lots of uses for the fibers—for example, in futons, insulation, filling for stuffed animals. Instead of all virgin material, we can use material that has been fiberized.” The project is ongoing, and Lewis and her team are working to improve the machine’s capabilities. “We were finding that different materials required different approaches,” says Lewis, who got logistical help on the project from Eileen Fisher’s recycled clothing line. “We had one set of cutting blades that could shred certain fabrics but not others. That’s another challenge with fashion: we use many types of fabrics—and they look great and have different properties, but they don’t all break down the same.”

For Lewis, the magnitude of the issue of castoff clothing hit home when she went on research trips to Haiti in 2013–14. That country is a major importer of America’s previously worn apparel via the so-called rag trade: the best items are sold in U.S. thrift shops, while the majority is shipped to the developing world. That category of used clothing is actually part of the virtuous 15 percent that doesn’t end up in American landfills. But it comprises an enormous amount of material, and it’s a disposal stream that’s drying up; some countries, particularly in Africa, have begun to resist the imports on the grounds that they stifle the local textile economy. “The volume of clothing I saw made me realize that these are all things out of our closets that end up somewhere else,” Lewis recalls of the Haiti visits, noting that the experience affected her not only as a scholar but as a shopper. “It really made me think about what we buy. Do you really wear it? Do you really need it? I love shopping and fashion, but now I try to think about longevity and versatility. I pick things that I could wear with a bunch of other things, that I could wear longer. I look at what the fabric is made of, because if it’s all one content it can be recycled. So I’m trying to make an informed decision beyond, ‘This is cute, I should get it.’ ” 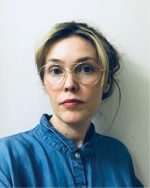 And as her student Roberts observes, extremely inexpensive clothing is inherently unsustainable—particularly when you factor in elements such as the conditions in which it was made and the carbon footprint of shipping raw materials and finished goods around the globe. “Younger consumers go shopping and buy the $10 dress; that’s what they can afford, and they’ve become accustomed to the idea that this will maybe make it through the season but probably not much longer than that,” Roberts says. “There’s a lot of work to be done to shift that thinking, because in sustainable fashion, that simply can’t be the cost. It wasn’t the company that got squeezed on the price of that $10 dress, it was the workers; there were a lot of people in the production pipeline that had to make sacrifices for it to be that price. So it’s educating people about the idea that you have to invest in your clothes, but ideally you’re getting something more out of it too. You don’t have to discard this after one season; you’re buying something of quality that you can keep in your wardrobe for quite a long time.”

Originally planning on a career in social work—her undergrad major—Roberts switched gears after college and studied at the Fashion Institute of Technology and Parsons School of Design, then earned a master’s in fashion studies at CUNY. She’s now pursuing a PhD in apparel design on the Hill, currently gearing up for a thesis project in which she’ll study American designers and brands who are centering their businesses around repurposing textiles traditionally considered waste. “Sustainable fashion is a very broad topic, because there are so many steps to production and so many stakeholders, and it’s a global industry,” Roberts notes. “Sustainability can feel like a shell game, because different parts of the supply chain are happening all over the world. It’s easy for it to be ‘out of sight, out of mind.’ ” 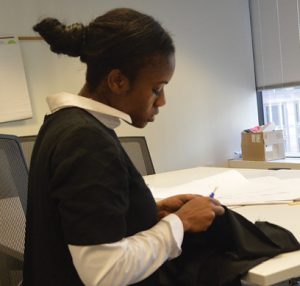 Another PhD student studying under Lewis, Cindy Cordoba Arroyo, is also researching ways to keep garments out of the landfill—but with a particular focus. Arroyo is studying how to make airline uniforms last longer and how they might best be recycled when they come to the end of their useful lives. “Post-consumer textile waste is a problem—but uniforms are an even bigger issue, because they’re branded and they have security concerns,” says Arroyo, who did a sustainability internship with United Airlines in 2019. “So it’s really difficult to dispose of uniforms in a responsible manner.” As she explains, since it’s vital that only authorized personnel have access to uniforms worn by airline staff, they can’t be donated like typical clothing. And flight attendants in particular go through a lot of them: their jobs, which involve interacting with the public and serving food and beverages, are hard on their uniforms, which are generally replaced every twelve to eighteen months. Arroyo is studying ways that these uniforms can be redesigned so they can last longer—for example, by adding protective coatings—with an eye toward ensuring that they can be easily disassembled and recycled after they’re retired.

A native of Colombia, Arroyo is another avid proponent of a “circular” approach to preventing waste in the apparel industry, envisioning a future in which materials used to make clothing rarely end up in the landfill but are instead repurposed and reborn. She maintains an Instagram account (@circular.fashion, which has more than 2,000 followers) that explores the topic, and hosts a Spanish-language podcast, Moda Circular, that showcases designers, entrepreneurs, and scholars working toward sustainability in the fashion industry. “Circularity is creating a system where materials have different life cycles,” says Arroyo. “As designers, we have a responsibility to make things that improve people’s lives and have more positive than negative impact. We can ignore the impact of what we do—or we can think about what’s next for what we create.”