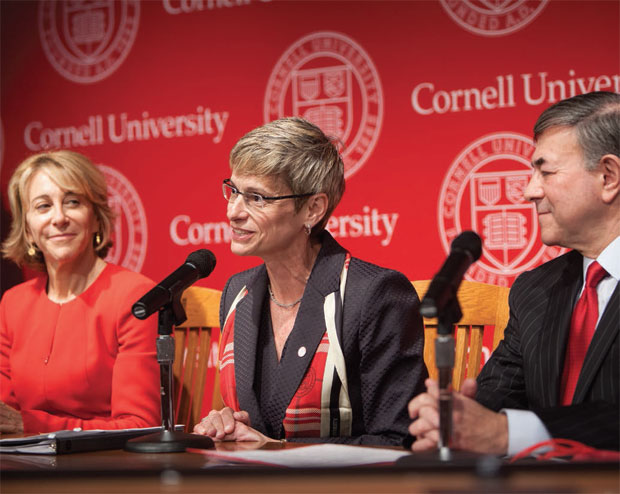 Garrett, currently provost and senior vice president for academic affairs at the University of Southern California (USC), was announced as Cornell’s thirteenth president in late September, at a press conference held at the Law School. The location was no accident: Garrett is a legal scholar whose résumé includes clerking for Supreme Court Justice Thurgood Marshall. “I’d like to point out to everyone here how difficult the job is to find a president for this great institution,” Board of Trustees chairman Robert Harrison ’76 told the assembled reporters. “There are few universities in the world that are as complex, ambitious, and far-reaching as Cornell University. And what that means is we set our sights very, very high in terms of the attributes and the experiences that we require of somebody capable enough to lead Cornell into the next 150 years—and I could not be more certain that we have found the perfect person in Beth Garrett.” Added Jan Rock Zubrow ’77, chair of the board’s executive committee and of the search committee: “Among a truly world-class group of candidates, there was one person who emerged as the clear winner, who possessed all of the core competencies that we set out to find.”

An undergraduate alumna of the University of Oklahoma—where she earned a BA in history with special distinction—the fifty-one-year-old Garrett has a JD from the University of Virginia. At USC, where she was the first woman to hold the number-two job, she oversees the college of arts and sciences, the medical school, and sixteen other professional schools, as well as the divisions of student affairs, research, libraries, religious life, and more. She is also the Duggan Professor of Law, Political Science, Finance and Business Economics, and Public Policy. At the announcement in September, she called her new job a “once-in-a-lifetime opportunity.” “Cornell is committed to academic excellence; the breadth of that excellence is unmatched anywhere in higher education,” Garrett said. “Faculty, staff, and students work throughout the schools, the departments, and the institutes every day doing research, scholarship, and creative work that advances innovation, improves lives throughout the world, and contributes to the search for truth.” 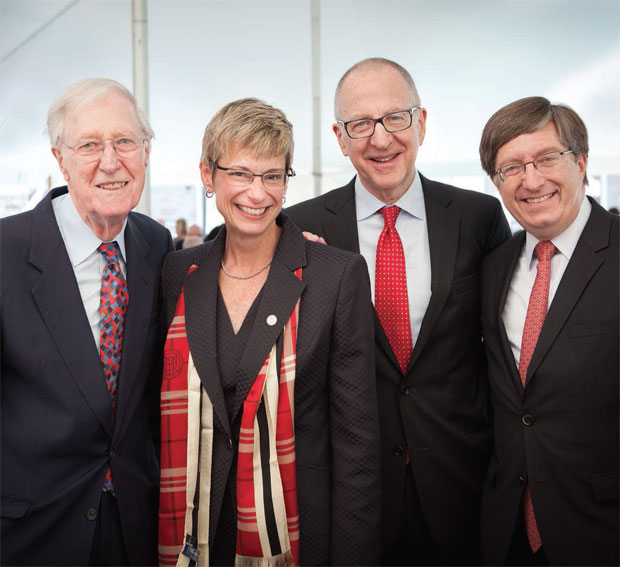 The search that culminated in Garrett’s hiring kicked off six months ago, following President David Skorton’s announcement that he would step down at the end of the 2014–15 academic year to become secretary of the Smithsonian Institution in Washington, D.C.—leading the world’s largest museum and research complex, affectionately known as “America’s attic.” The search for a successor to Skorton, who assumed the presidency in 2006, was aimed to be the most inclusive in University history. “As an undergraduate, I was a student trustee—and the world then was a lot less democratic than it is today,” Harrison noted. “I think the president of the University was selected by the chairman of the board in those days. I don’t think there was a lot of thought given to including other groups in the process.” 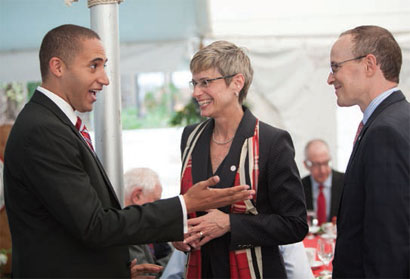 Four decades later, by contrast, the search involved not only trustees, but alumni, faculty, staff, and students; a website offered updates, and anyone was welcome to suggest a candidate online. The search committee comprised nineteen members—including two student trustees—plus two advisors, board chairmen emeriti Peter Meinig ’61, BME ’62, and Harold Tanner ’52. They began with a list of 200 names. “Jan ran the discipline process; she basically killed all our summer vacations,” Harrison quipped. “We had an exhaustive review of a subset of that 200, many presidential search committee meetings and face-to-face meetings with individual candidates, and ultimately the selection of Beth.”

Asked what put Garrett head and shoulders above the rest, Zubrow cited her success in advancing USC, where she has been provost since 2010 and previously served as vice president for academic planning and budget. “The thing that really stood out was the way she did that: by creating cross-college and interdisciplinary initiatives—big ones—that really brought colleges and campuses together,” Zubrow said. “And they used these initiatives to go out and recruit top faculty, and that is what advanced the institution. We saw, in that, great power to bring Cornell together.”

Garrett’s scholarly interests center on the legislative process, democratic institutions, tax policy, and the federal budget. In addition to clerking for Marshall, she served as legislative director and budget and tax counsel to Senator David Boren, a Democrat from Oklahoma. At Cornell, she’ll hold a tenured professorship in the Law School with a joint appointment in government. “I was an unusual law professor, in that I’m really focused more on what happens in legislatures and in administrative agencies than on what happens in courts,” Garrett observed. “Most of what happens in the law actually doesn’t happen in a courtroom. It happens in administrative agencies that make enormous amounts of policy; it happens in the state and federal legislature.” In 2005, President George W. Bush appointed Garrett to the bipartisan Advisory Panel on Federal Tax Reform. She also served four years as a commissioner of California’s independent political oversight agency.

Garrett’s husband, Andrei Marmor, is a professor of law and philosophy at USC. He will join the Cornell faculty, with joint appointments at the Law School and in Arts and Sciences. An alumnus of Tel Aviv University and Oxford, Marmor is the author of ten books—most recently The Language of Law, published by Oxford University Press—and serves as editor-in-chief of the Journal of Ethics and Social Responsibility.

Garrett’s outside interests include a passion for travel; the couple’s latest trip, last summer, was to Cambodia and Vietnam. She’s a fan of reading mystery novels—particularly on airplanes—and is an avid cross-stitcher and needlepointer. “I was a competitive debater in high school,” she said, “and if any of you debate you know there are long periods of time between rounds where you’re waiting for results to come in. So I learned to use my time productively and I’ve made a tremendous number of pillows, shawls, baby gifts, etc.” Asked whether she’d continue Skorton’s tradition of performing live music, she responded with a laugh that although she is a “great connoisseur and enjoyer of music,” she will not be performing—”to everyone’s great relief.”

Over the coming months, Garrett and Marmor plan visits to the Ithaca and New York City campuses, as she gets up to speed for her installation in Day Hall through conversations with Cornellians of all constituencies. “I want to listen to what faculty, staff, and students share with me about their dreams for Cornell,” she said, “and I hope to hit the ground running on July 1 when I move to Ithaca as a permanent resident.” But as CAM asked at the press conference, held on a picture-perfect autumn day: coming from sunny Southern California, has she been forewarned about Ithaca’s less appealing climes? “Well, I was at the University of Chicago before USC,” she replied with a smile, “so I have some knowledge of winter.”