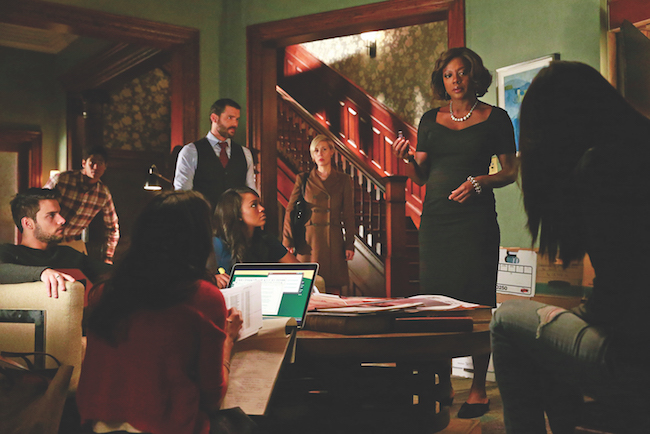 A scene from ABC’s legal thriller “How to Get Away With Murder,” whose staff writers include Erika Green Stafford ’94

There’s never a dull moment at the law firm of Annalise Keating. First, Keating’s husband—an adulterous college professor whose (pregnant) undergrad mistress was found strangled in a water tower—was bludgeoned to death in their vestibule, his body whisked away without a trace. Then her law interns—an exceedingly comely bunch, each battling personal demons—conspired to cover up the crime. Since then, those students have been involved in all manner of mayhem: one ran over a district attorney with his car; another fell in love with a serial killer; a third suspected that, as a child, he’d stabbed his own mother to death and blocked out the memory. If only Keating could rely on her two assistants, a junior lawyer and a shady investigator . . . but they’re each guilty of murder in their own right.

If you followed all that—and it’s really just the tip of the iceberg, plot-wise—then you must be a fan of “How to Get Away With Murder.” ABC’s over-the-top legal thriller, which begins its third season in late September, is executive-produced by TV powerhouse Shonda Rhimes, the showrunner behind “Grey’s Anatomy” and “Scandal.” “HTGAWM” (as it’s known in fan shorthand) melds outrageous plotting with serious acting chops: its star, Viola Davis, has been nominated twice for an Oscar (for “Doubt” and “The Help”) and four times for a Golden Globe. In 2015, her work on the show—whose first two seasons have each tallied more than 10 million viewers—made her the only African American ever to win a Primetime Emmy for best lead actress in a drama series.

From the show’s inception, its screenwriting and production team has included a veteran of the crime-drama genre: Erika Green Swafford ’94. Swafford came to “HTGAWM” after six seasons on “The Mentalist”—nearly the show’s entire run, and an eternity by TV writing standards. “All the things you need to know to run a show, I learned on ‘The Mentalist,’ ” Swafford says of the series, a CBS hit that followed a suave former carnival psychic who solved murders. “I learned what the director does, how to fix lines for actors, postproduction, plus the skill of writing procedural television.”

Swafford came to her current gig by an unlikely route. With longtime dreams of being a chef or spa owner, she studied at the School of Hotel Administration and worked in hospitality in Washington, D.C., after graduation—but she found the career unfulfilling, and spent her evenings taking classes in writing and improv comedy. “It was kind of like I was cheating on my day job,” Swafford says with a laugh. “I started looking for things that made me happy, and I was more focused on those than on my actual job.”

She decided she wanted to get into TV and film production, but balked at moving to Los Angeles and taking her chances. “I think because I’m a firstborn and a type-A, I couldn’t have just gone out and looked for a job,” she says. “That seemed too tenuous.” So, realizing that she also craved a grounding in the business side of the industry, she applied to MBA programs and wound up matriculating at UCLA. Connections there led to her first industry position, at the woman-
oriented TV network Oxygen. By day, she was a mid-level production executive; by night she was taking improv classes, producing spec scripts, and mounting one-woman shows.

Eventually, Swafford landed a coveted spot in a writers’ development program at Warner Brothers, which led to her job on “The Mentalist” just as the show was going into production. All in all, she notes, she’d spent eight years working in Hollywood before she got that first official job as a screenwriter. “Out here, everybody’s journey is a little nebulous,” she says. “I’ve met people who started out waiting tables, or were hired as some flaky star’s assistant, or got into a mailroom and worked their way up. The industry feels theoretical until you step into it. Then, once you’re in the middle of it, you can start making decisions.” 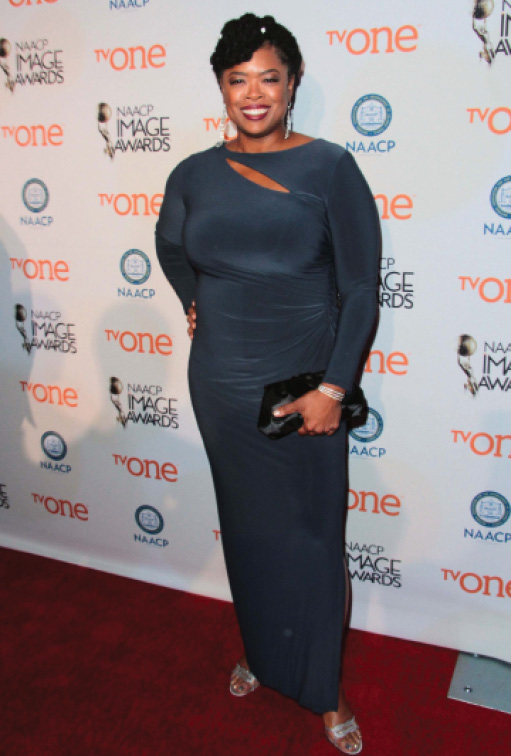 Stafford on the red carpet at the NAACP Image Awards in February 2015.

One of the few African American women on a network TV writing staff, Swafford is acutely aware of the lack of diversity in her industry—an issue that came to national attention after this year’s Oscar nominations were overwhelmingly white. “HTGAWM,” however, stands out for the diversity of both its production staff and its characters, which include those who are black, Latina, Asian, gay, lesbian, and bisexual. Swafford won an NAACP Image Award for penning a much-discussed first-season episode in which Keating removes her omnipresent wig to reveal her natural hair; she was nominated for co-writing another in which the character’s forceful mom (played by the eminent Cicely Tyson) comforted her by combing her hair and massaging her scalp. “I’ll take credit for the head-scratching scene, which came from my own experience,” says Swafford. “It’s a ritual between mother and daughter—her doing my hair or scratching up my scalp, and us having conversations while she did it.”

Although that scene reflected Swafford’s personal history, she stresses that TV writing is a highly collaborative process. In addition to the constant back-and-forth inside the writers’ room, there’s input from actors, producers, network executives, and others—not to mention the realities of budget and time constraints. “You go through a lot of gristmilling; you have to kill your darlings on a daily basis,” she says. “You might want to have a helicopter and explosions and dead bodies everywhere—and then your line producer says, ‘You can have one body, and we’re not going to have an explosion; we’re going to have the aftermath.’ ” When Swafford’s dialogue does come verbatim into millions of American living rooms, she says, it’s particularly gratifying—especially when it’s delivered by an Oscar nominee. “Viola Davis is a singular talent,” she says. “When you have that kind of person actually saying things that you wrote on the couch in your pajamas, it’s kind of awesome.”