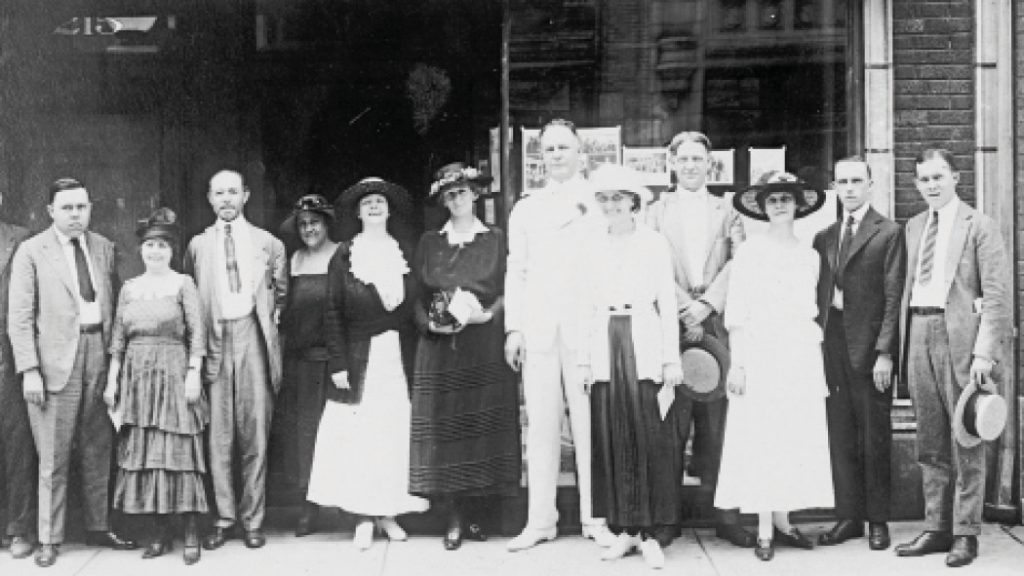 Parley Christensen, LLB 1897 (in white suit), with members of the National Woman’s Party in 1920, the year he ran for president.

As Hillary Clinton and Donald Trump vie for votes in a bitterly contested presidential election, it’s an apt moment to remember a colorful Cornellian who made his own bid for the White House nearly a century ago. It was back in 1920, that eventful year in American history that saw the advent of Prohibition and the passage of women’s suffrage. Amid that societal tumult, one Parley Parker Christensen, LLB 1897, sought the highest post in the land on a minor-party ticket—and came closer to the Oval Office than any Cornellian before or since.

Christensen’s up-from-the-bootstraps background makes for a dramatic origin story. His Mormon parents, both from Denmark, pioneered their way across the Plains, walking most of the way alongside teams of oxen. Parley, born in the Idaho Territory, was the fifth of thirteen children, five of whom died in infancy. Not long after the family settled in the Utah Territory, his parents divorced and his father was excommunicated from the church. After earning an undergrad degree from the University of Deseret (now the University of Utah) in 1890, Christensen worked as a teacher, school superintendent, and secretary of the constitutional convention that created the State of Utah; he then earned a bachelor of laws on the Hill, where he was chairman of the Republican Club. After returning to Utah to serve as Salt Lake County attorney, he made three unsuccessful bids for the Republican nomination for U.S. Congress. Eventually, he served in the state legislature as a member of the fledgling “Bull Moose” Progressive Party.

Christensen’s politics moved increasingly leftward, and by 1920 he arrived in Chicago as a delegate to the new national Labor Party and convention chairman of the Committee of Forty-Eight, a remnant of the Bull Moose Party. The parties met separately at first, but soon united, aiming for a merger of supporters and priorities. It was a contentious convention, and tempers often flared. “I’m not going to be rough, but I’m going to ride this convention,” warned Christensen, who was impossible to ignore at 6-foot-4, 260 pounds, and clad in his trademark white linen suit. At the same time, he did his best to assuage each faction—acting, according to Current Opinion magazine, like a “parliamentary orchestra leader” in which “his gavel becomes a baton.”

After four days of political wrangling—haggling even over the new organization’s name—the Farmer-Labor Party was born, and on the second ballot Christensen was chosen to lead it. A self-described “independent bachelor,” he was quoted as saying, “The first thing I’m going to do is go home to my mother.” But he also declared, “My work has just begun.” He vowed a “nation-wide, twenty-four-hour-day, seven-day-week, town-hall, street-corner, and front-porch campaign,” and the New York Times noted his “especial delight in whacking Republicans over the head.” The Farmer-Labor Party’s platform called for large-scale nationalization of the economy, expanded civil rights, amnesty for political prisoners (particularly Socialist Party leader Eugene Debs), the right of all workers to strike, recognition of the Soviet Union, and an end to American imperialism. Critics claimed it smacked of communism—and, in fact, Christensen would later travel to the USSR and meet with Vladimir Lenin—but he described it as a “100 percent American effort to restore to the people the right to govern themselves.”

Although Christensen was never formally baptized into the Mormon Church, he did grow up in a Mormon family; as such, he was the first person of that faith to run for president since Joseph Smith himself in 1844. Smith had been killed by an angry mob before Election Day, but Christensen was undone by a numbers game. The party had little money, and Christensen managed to get on the ballot in only eighteen states. In November he finished a distant fourth, behind Republican Warren Harding, Democrat James Cox, and the incarcerated Debs. Still, his 265,398 votes represented nearly 1 percent of the voting population—about what the Libertarian Party received in 2012.

The Farmer-Labor Party soon faded, but Christensen’s ongoing political career included a stint as chairman of the Illinois Progressive Party, an unsuccessful run for U.S. Senate, a dalliance with Upton Sinclair’s End Poverty in California (EPIC) crusade, and six terms on the Los Angeles city council. He died in 1954, thirty-four years after being chosen to lead a short-lived but proudly progressive political party—an honor for which he claimed to be “plumb tickled.”

On TV, a Big Red President 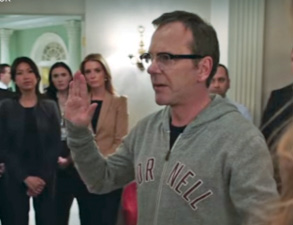 This fall, a Cornellian is set to enter the White House—but he’s a fictional character. In the new TV series “Designated Survivor,” Kiefer Sutherland plays a low-level Cabinet member who suddenly ascends to the presidency after a terrorist attack wipes out much of the government. The teaser for the show, on ABC, depicts the moment when the protagonist learns the shocking news—and he’s costumed in a Cornell hoodie.

On the flip side, at least two alumni have portrayed the commander in chief on screens both small and wide. In 2004, Jimmy Smits, MFA ’82, played Matt Santos, a Democratic representative from Texas who was elected president on the final season of the political drama “The West Wing.” And William Sadler, MFA ’74, portrayed the president in the second-highest grossing film of 2013: Iron Man 3.