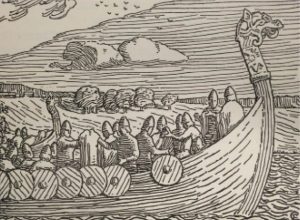 SEAFARING PEOPLE: An image of a viking ship from Cornell’s Fiske Icelandic CollectionDivision of Rare and Manuscript Collections

“Vikings in Scandinavia,” says Oren Falk, associate professor of history and medieval studies, “are sort of like cowboys in America.” As Falk explains it, both endure as romantic icons of rugged adventure, but aren’t representative of the times in which they lived. Rather, he says, they were exceptional characters within a broader society.

Since fall 2016, Cornell has given undergrads the chance to specialize in the study of Viking culture—and that of the wider Norse world—through the creation of a new minor. Housed within the medieval studies program, Viking studies explores such topics as the literature, history, linguistics, and archaeology of Norsemen in the Middle Ages. Falk, who co-directs the minor with colleague Thomas Hill, notes that Cornell is particularly suited for scholarship on the Viking Age: the Fiske Icelandic Collection in Olin and Kroch libraries is one of the world’s leading repositories of contemporary and antiquarian books on the Norse world, and the University is one of the few North American institutions to offer language courses in Old Norse.

In that tongue, the word Viking translates as “pirate” or “raider.” For two centuries beginning in roughly 800, these Scandinavians—who lived in what is now Denmark, Norway, Sweden, Finland, and the Baltic region, and also settled Iceland and Greenland—pillaged and conquered along the coasts of Britain, France, Germany, Spain, Portugal, and beyond. But such raids gained outsized importance due in part to the vivid historical accounts, known as sagas, that immortalize battles while overlooking less dramatic facets of everyday life—such as commerce and agriculture—that made up a larger part of the culture. “Vikings were not just pirates that sailed in warships,” says Hailey Brace ’19, who’s currently enrolled in the minor, “but practition­ers of a way of life that had a long-term impact on environments and cultures.” In recent years, the era has enjoyed a resurgence of interest thanks in part to a show on TV’s History Channel. “Vikings,” which debuted in 2013, chronicles the adventures of Norse marauders while exploring the wider civilization, including politics and religion. “Vikings took the world stage as settlers, explorers, and colonizers; they influenced the economy, culture, language, literature, and even ecology,” Falk says. “Viking studies are an opportunity to get in touch with that, and also with the aftereffects of this period.”

While no one has yet completed the minor, students from a variety of majors, including English and policy analysis and management, have taken its qualifying courses. The minor’s requirements comprise a series of electives—on such topics as the Viking diaspora through the North Atlantic, Old Norse linguistics, Icelandic sagas and mythology, and the politics of Norsemen in Scandinavia—as well as a capstone course to synthesize the material. Students can also get credit toward the minor through study abroad programs, including in Norway and the British Isles. “Reading sagas, and getting this incredibly clear picture of what life was like in medieval Iceland, had me really excited,” says Michael Stolkarts ’20, who’s pursuing a self-designed major in medieval North Atlantic studies as well as a minor in Viking studies. “I felt like I was there as the dramas played out.”

The 1066 Norman conquest of England is often cited as the endpoint of the Viking Age. But Falk stresses that the era’s relative brevity doesn’t diminish its scholarly value. “You won’t see Vikings walking around today, and it can be hard to see their direct impact on modern society,” he says. “But even if you were to consider the Viking Age to be a failed experiment, I think it’s ideologically imperative to study the dead ends of history,” he says. “It gives you a different point of view on the world and sensitizes you to missed opportunities—and you get to read the sagas.”