Joe Parent ’72 is a golf coach—but he doesn’t correct swings. Instead, he focuses on the mind. “I translate technical instruction into mental and psycho-physical feel,” he explains. “This frees you up so you’re not thinking about how you’re doing it.” Parent preaches an approach to the game in which you trust your swing—and practice your smile. “People think if only they would play better they would enjoy it more,” he says. “It actually works the other way around.”

It’s all very Zen—and Parent has made a career out of it. The author of the bestselling Zen Golf: Mastering the Mental Game, Parent offers lessons that blend modern psychology and ancient wisdom. The combination has evolved into a cottage industry that includes two more books (Zen Putting and a collection of tips entitled Golf: The Art of the Mental Game), a four-DVD collection of instructional videos, and even a Zen Golf card deck, which condenses his key principles into fifty mental exercises. Parent also offers personal instruction, primarily at two Southern California golf courses—the Los Angeles Country Club and the Ojai Valley Inn and Spa Resort. 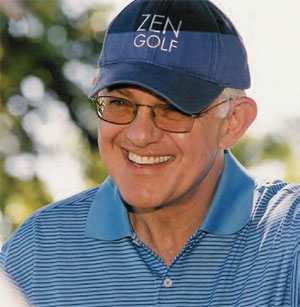 The organizing principle of Parent’s coaching program is the “PAR” approach, which stands for preparation, action, and response to result. Before each shot, he advocates visualizing both the target and the path the ball will take to get there. While swinging, think about what you intend to do, rather than how you intend to do it. As for the results, he says: “With the perspective of unconditional confidence, one bad shot won’t lead us to doubt ourselves.”

Parent’s teachings have taken him beyond the golf course. He gives keynote speeches about being “at the top of your game” in business and life and has led corporate seminars at companies like Morgan Stanley and Merrill Lynch. “Basically, it’s all performance psychology—how to be as effective as you can be,” he says. “Golf is a great revealer, as well as a trainer.” He has also worked with actors, including George Lopez, Ray Romano, and Michael O’Keefe—who, as it happens, played the lead in Caddyshack. As Chevy Chase memorably advised in that film: “Be the ball”—which sounds as if it could have been a chapter title in Zen Golf. “Basically, he’s saying go with the flow,” says Parent. “Get out of your head. And identify with the experience.”

Parent was a four-sport high school athlete while growing up in New Jersey, but he was only a recreational golfer. “I like to say that I learned from my father, who shot in the low 120s,” laughs Parent, who now shoots in the high seventies and low eighties. At Cornell, he enrolled in the College of Engineering, but a sophomore year epi­phany led him to switch his major. When asked on a form why he wanted to major in psychology, he responded: “To find out why I want to major in psychology.”

Following graduation, Parent moved to Colorado, where he explored the workings of the mind both from a Western perspective (earning a PhD in social psychology from the University of Colorado) and an Eastern one (training in the Buddhist and Shambhala traditions at a meditation center in Boulder). One of his meditation teachers frequently used golf to impart lessons in awareness and insight. But, Parent wondered, could the reverse be true? Could Buddhist practices—practical techniques for essentially getting out of your own way—improve sports performance? “It works particularly well in golf, because there is time for thoughts to interfere,” says Parent. “There’s no time limit, and the ball is just sitting there.” Only parts of other sports pose a similar challenge—shooting a free throw, for instance, or pitching a baseball. But every aspect of golf is a mind game. “And the closer you get to the hole,” says Parent, “the more mental it is.”

By the Nineties, Parent began offering his hybrid of East-West sports psychology to golfers of all abilities. Pros told other pros, and Parent began to advise players at the highest levels, including elite golfers like World Golf Hall of Famer Julie Inkster and major-winner David Toms. Vijay Singh began working with Parent and eventually replaced Tiger Woods as the top-ranked pro—after which Golf Digest named Parent to its list of the top ten mental game experts.

In Zen Golf, Parent extrapolates sports wisdom from traditional stories, suggesting ways for golfers to boost confidence and free themselves from doubt and fear. He offers exercises like maintaining a self-assured posture regardless of how the round is playing out, and reacting to poor shots not with a storm of emotion but with an attempt at intellectual detachment. “Hmmm,” he thinks we should say after a nasty slice, “that’s interesting.”