Mechanical and aerospace engineering professor Mason Peck is on loan to NASA for two years as the agency's chief technologist. Steve Squyres '78, PhD '81, the Goldwin Smith Professor of Astronomy, is serving a two-year term as chairman of the NASA Advisory Council. Both are veteran space researchers; Peck's ongoing projects include two Cornell-built satellite programs, and Squyres is principal scientific investigator for the Mars Exploration Rover mission. Peck is currently based at NASA headquarters in Washington, D.C.; during one of his occasional visits to campus, he and Squyres sat down with CAM to discuss the space agency, their hopes for a ticket to Mars—and how downright cool their jobs are.

Cornell Alumni Magazine: What does it mean to be NASA's chief technologist? 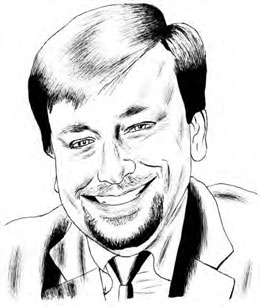 Mason Peck: I have a number of roles. One is as the chief advocate or spokesperson for technology at NASA, both inside and outside the agency. I advise the NASA administrator on technology matters and provide that kind of information to Congress, the Office of Management and Budget, the President's office, and other folks in Washington. Also, the Office of the Chief Technologist has a space technology program that started up last year. There's a lot of giving congressional testimony; it's often pro forma stuff, explaining the specifics and motivation behind aspects of NASA's budget.

CAM: Steve, what does the chairman of the NASA Advisory Council do?

Steve Squyres: Like many government agencies, NASA looks outside for advice; it has a complex, multi-tiered advisory structure and at the top is the Advisory Council, which has about a dozen members. I run that process and am the chief external adviser to the NASA administrator. Before I became chairman, I led the Planetary Decadal Survey for the National Research Council; it's a big effort to devise a ten-year strategic plan for planetary exploration. One of the things we stressed was the importance of investing in technology.

CAM: Why is technology investment so important?

SS: Technology is the seed corn, the stuff that prepares you for future missions. But if you have a current mission that overruns its budget, it's tempting to raid the technology money to pay for today's problem. So one of the things we recommended in Planetary Decadal was to establish, just for planetary exploration, a well-funded technology line that is fenced off so nobody can steal from it to solve other problems.

MP: The great news is that the President and Congress both support the way that we're investing in technology at NASA. There's bipartisan support, so—maybe for the first time in a long time—this is not seen as discretionary spending. The technology investments we're making are required for some of the next-generation stuff we're doing. One of the challenges the President has set for NASA is to get humans to an asteroid and then to Mars. We can't do that with today's technology. We have to invest in crew systems, including radiation protection, and in ways to store cryogenic propellant.

MP: You think rocket fuel is just gasoline that you light on fire and off you go, but the fact is that the most efficient propellants tend to be cryogens, which are very cold gases that have been turned to liquid.

SS: There are also applications in science. For example, there are telescopes in space that operate at infrared wavelengths, and parts of them need to be very cold. And the way to do that is by storing cryogenic fluids in space.

CAM: To what extent do you want to be the people who don't just plan the missions, but go on them? Do you want to go to space?

SS: In a heartbeat. Absolutely.

MP: There are people who would say yes without even thinking. I'm one of them.

CAM: Was it disheartening to have the shuttle program end—to stop sending astronauts into space on American ships?

SS: We still have an active human space flight program, we're just sending them a different way. NASA has been launching humans into space in various ways for half a century; at some point, the business of getting stuff and people to low Earth orbit should be routine enough that you can hand that role off to industry. That frees up NASA's resources to take on more challenging tasks like deep space—to asteroids, Mars, and beyond.

CAM: How has NASA been affected by governmental cost-cutting?

MP: Congress authorized more than $1 billion for technology at NASA; the budget for 2012 is $575 million, so it is significantly below what was authorized and what we requested. We've done the best we can to create a viable program out of that. The fact is that everything at NASA—technology, earth science, planetary science, avionics, aeronautics—is influenced by financial realities.

CAM: In a recession, how do you justify spending on NASA?

MP: Technology can be the solution for doing things more efficiently. But there's more to it than that, because a lot of NASA's investments spin off and create jobs. We're not only doing the science and human exploration—as compelling as those are—but also driving part of the innovation economy in this country.

SS: When we spend money in space, we don't take big bails of $100 bills and shoot them off in a rocket. We spend the money on Earth, and it pays for salaries for highly educated, capable technical people—and that goes straight into the economy. We're not entitled to this funding; we have to earn it. But it pays off.

CAM: How would you gauge the mood about investing in future missions, both among the American people and inside the Beltway?

SS: The situation inside the Beltway is tough. Money is very tight—and NASA, like other agencies, is under enormous pressure. But public support for space is broad; I get hundreds of e-mails about the Rover mission. One little girl wrote saying she wants to work for NASA someday because she's excited about the Rover. I don't know if she's going to work for NASA, but she's going to be motivated to acquire the education she needs to go into some kind of scientific, technical, engineering, or math field.

CAM: Were you that kid when you were little?

SS:  I grew up watching Mercury, Gemini, and Apollo on TV and dreaming of sending spaceships to Mars someday—and now I do. I remember turning the family room into a moonscape; I'd make little rovers out of Tinkertoys and drive them around.

MP: Like Steve, I grew up on a diet of NASA's accomplishments. I was only about three years old, but I remember going with my dad to buy our first TV to watch one of the Apollo moon landings.

CAM: In an era where budgets are getting cut and the shuttle program has been discontinued, how confident are you that young people who want to work for NASA will be able to find a job after grad school?

MP: Sometimes a student will come to me and say, "I'm interested in studying spacecraft. Is that weird? Are people even astronauts anymore?" It's sad that you'd feel sheepish about that—like you're a nut if you want to be in space. Not everyone thinks that way, but enough of the best and brightest I come across at Cornell have the perspective of, "I might have to come out to my parents as an astronaut."

SS: Not everybody who dreams of building spaceships and sending them into the cosmos is going to get to do that. But if you're motivated by dreams of working for NASA, your can use your training even if you end up doing something else.

MP: Far more people work on NASA projects than work at  NASA. You can work for a contractor, or work for the military on a NASA-related project.

SS:  Another thing that people don't realize is that there are many opportunities to work in the space program that don't involve technology. At the peak of the Mars Rovers we were spending $1 million a day. We needed lawyers and accountants like you can't believe.

CAM: Given that you grew up on the space race, how cool is it that you get to do this for a living?

MP:  Not much else could have dislodged me from a rewarding position at Cornell.

SS:  If you can't have fun operating rovers on Mars, just give it up.