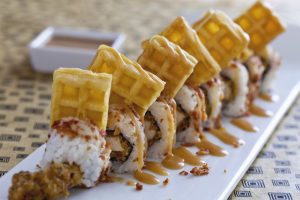 In addition to founder, president, and CEO, Abe Ng ’95 holds a fishier title: “chief sushi officer.” The Hotelie oversees a Miami-area empire that boasts some 200 employees, six restaurants, and sales in ten Whole Foods stores. Dubbed Sushi Maki, the company also sells pre-made boxes at local hospitals and universities, feeds hungry Miami Heat fans at AmericanAirlines Arena, operates a kiosk at the Ft. Lauderdale airport, and runs a catering operation that supplies high-end hotels like the Ritz-Carlton and Four Seasons. “We wanted to make sushi affordable and accessible,” says Ng, who was recently named to the Miami Herald’s list of the top fifty people in the South Florida food scene. “The model that we looked at was pizza; two generations ago, it was considered Italian food. We think that within another generation, sushi is not going to be considered Japanese food; it’s just going to be food.”

In addition to familiar sushi-bar fare—tuna rolls, seaweed salad, salmon sashimi—Ng’s restaurants offer such novelties as a “chicken n’ waffles” roll (it also includes bacon, pickled veggies, and maple mayo) and sushi tacos, in which the fish is served in a shell made of gyoza (Japanese dumpling) dough. To supply its catering and box-sushi operations, Sushi Maki runs a nearly 10,000-square-foot commissary complete with robots that partly automate the assembly process: they spread rice onto the seaweed and, after humans layer on the fillings, roll the sushi and cut it into pieces. “A half-dozen people can create thousands of rolls, which would otherwise be impossible to do,” says Ng, chatting with CAM in the Statler lobby during a May visit to his alma mater to speak to an entrepreneurship class. Plus, he notes, the robots bolster sanitation, always a concern when working with raw fish: “The fewer human hands that touch the food, the fewer things that can go wrong.” 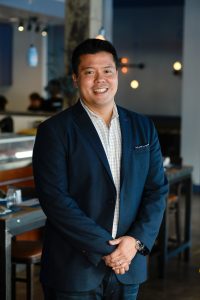 A Miami native, Ng grew up in the hospitality business; he’s the son of immigrants from Hong Kong who ran a trio of Cantonese restaurants. As a youth, he packed take-out orders, ran the cash register, and bused tables. “I learned about the relentless focus that you need to have with guests,” says Ng, whose wife, attorney Christina Tsai Ng ’96, does marketing for Sushi Maki and serves as its in-house counsel. “At the end of the day, that’s who you need to make happy.”

After a post-Cornell stint as an analyst with Ernst & Young in Miami, he opened a pair of burrito restaurants; when their lunch traffic wasn’t enough to sustain the business, he decided sushi was an underserved market. So he converted the locations into the first Sushi Maki restaurants, aiming to “democratize and demystify” the genre. “We all remember the first time we walked into a Starbucks and the person ahead of you ordered a triple nonfat light-foam latte—and by the time you got to the front of the line it was so intimidating you said, ‘I’ll just have a small coffee,’ ” Ng says with a laugh. “We wanted to create a sushi bar where you didn’t feel like you had to be in on the lingo to be accepted. We train our servers that if somebody pronounces something slightly wrong—don’t correct them.”