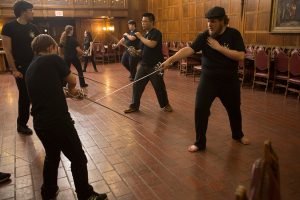 Hah!” shouts Michael Burke ’16 as he extends his dagger a few inches from his opponent’s neck. Eyeing the weapon beneath his chin, Cobi Rabinowitz ’16 retreats, then suddenly slashes his own dagger against Burke’s, producing a menacing sound.

Don’t worry; no Cornellians were harmed during this fight. The battle—carefully designed to look realistic by playing with depth perception—was “fought” by members of Cornell’s theatrical combat troupe, Ring of Steel.

Three evenings a week, the group transforms Risley’s Great Hall into a battlefield. In this elegant dining space—with tables and chairs pushed against the walls—students hone footwork, choreograph fight scenes, and practice using weaponry, from the classic (broadswords and axes) to the fantastical (faux Star Wars-style light sabers). “I initially joined because of, ‘Oh, shiny swords,’ ” says biological engineering major Andy Wu ’18, Ring of Steel’s treasurer. “But over time, I gained an appreciation for the finer points—how to place your feet, what angle to come in from, where your energy goes when you strike. It’s not just about the martial value, but the cultural and artistic details.”

The group’s dozen active members choreograph fight scenes for theatrical productions on campus, and show off their skills at events like the Risley Renaissance Faire and CornellCon, a pop culture expo at Robert Purcell Community Center. Instead of simply demonstrating moves, they perform action-packed minidramas, such as a tussle between Victor Frankenstein and his monster—the doctor has a syringe in one hand and a sword in the other—and a conflict in which a student asks his professor for a deadline extension and is challenged to a duel. “If it were just fighting, no one would care,” Rabinowitz says. “Two people punching each other is illegal, but it’s not interesting. If there are motivations and reactions behind the characters, it becomes a story that people want to watch— and we want to tell.”

To make the scenes as realistic as possible, Ring of Steel practices not just fighting techniques, but facial expressions and vocal reactions. They also perfect accents, like sword master Inigo Montoya’s Spanish-inflected speech in The Princess Bride. “Our members share a sense of humor and a sense of humility,” says group founder Jacob Lehman ’06, an associate director at the Johnson School who still trains with the group. “You may feel incredibly clumsy in the beginning. It’s a slow and difficult process to figure out how to use this long piece of metal and how to move it through space effectively, and it takes patience and practice.”

Lehman started Cornell’s branch of Ring of Steel as a freshman, having been active as a high school student with the chapter in his hometown of Ann Arbor, Michigan, where the group started. Each spring break, the Cornellian members visit the original University of Michigan club, where they participate in workshops and use its elaborate equipment, like a wirework system that allows fighters to mimic fantastical scenes as in the martial arts movie Crouching Tiger, Hidden Dragon. Lehman notes that in addition to learning stage fighting, Ring of Steel members pick up valuable lessons in public speaking, among other handy skills. “We learn how to roll and fall safely,” Lehman says. “This gives you overall physical fitness, balance, and bodily awareness that helps you for life.”