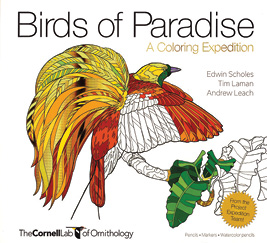 A male bird-of-paradise is seen perched on a branch, its feathers on dramatic display. A red-tailed hawk soars between two trees, on the lookout for its next meal. A great blue heron stands in a cluster of reeds, raising its chest to showcase its fluffy “nuptial plumes.”

These may be typical avian scenes, but the images themselves are unorthodox: instead of boasting their usual vibrant hues, the birds and their habitats are drawn in stark black and white, ready for someone to color between the lines. 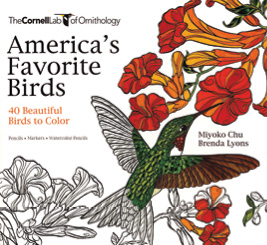 The drawings are featured in two books released last fall by the publishing arm of the Cornell Lab of Ornithology. With text by lab staffers and images by freelance artists, the volumes are intended to be both entertaining and educational. Tapping into the current popularity of coloring books for grown-ups, they offer an up-close look at species and their habitats, in scenes depicted with ornithological accuracy and vetted by lab scientists. “One of the biggest artistic challenges was how to show feathers in a way that would be fun to color, while echoing the patterns of the birds,” notes Miyoko Chu, the lab’s senior director of communications, who wrote the text for one of the books, America’s Favorite Birds. “Feathers can be tedious to color if you’re mimicking the feather structures directly from reality, so I appreciate that the artists found a balance.”

To select the forty species for America’s Favorite Birds from among 800 potential candidates, the lab conducted an online poll that garnered 250,000 votes in less than a week. The second book, Birds of Paradise, features thirty-nine species found on the island of New Guinea and its environs, as well as in northeastern Australia; it was written by Edwin Scholes, director of research and interpretation at the lab’s Macaulay Library. A third volume—Backyard Birds and Blossoms, co-written by Emma Greig, a former lab postdoc who now leads its Project FeederWatch—is due out in March. “We thought we could create something that’s fun and enjoyable, while also helping people understand birds, so hopefully they’ll want to protect them,” Chu says. “One of our motivations was to reach people who might not yet love birds—but if they realize how amazing and beautiful they are, they might become hooked.” 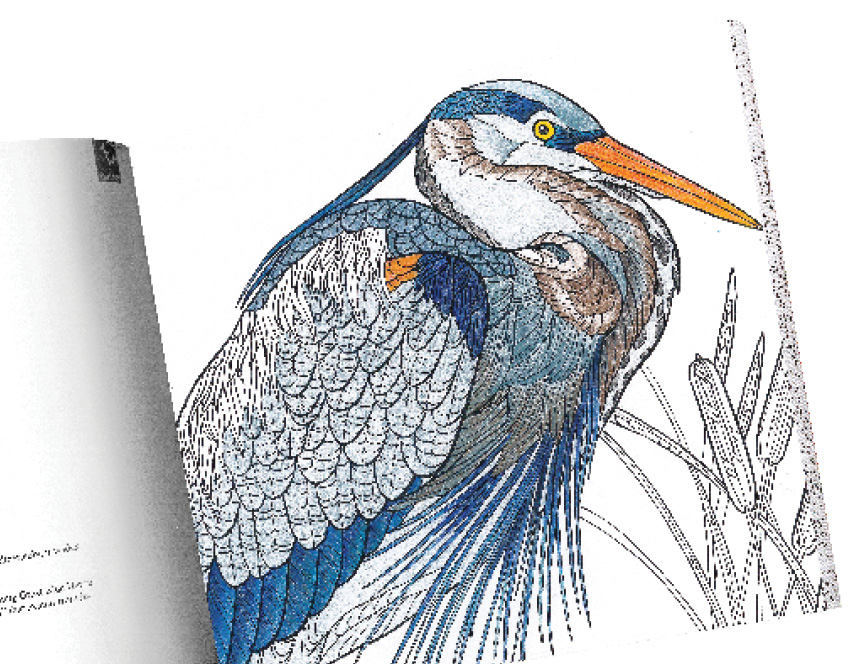 A great blue heron (seen here as a work in progress), one of the species in America’s Favorite Birds

The books are printed on heavy-stock paper that can accommodate the use of watercolor pencils; pages are perforated, so they can be easily removed for coloring or as a keepsake. The text includes each bird’s common and scientific names as well as illuminating details—for example, the fact that the ruby-throated hummingbird is the world’s most efficient pollinator of trumpet-vine flowers, transferring “ten times more pollen per visit than bumblebees do.” At the back of the books are color photos showing the birds’ real-life plumage—but Chu notes that users should feel free to be artistic. “People can color the birds realistically,” she says, “or they can use their imagination.”