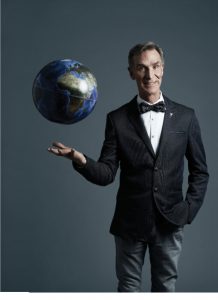 The University-trained mechanical engineer known as “the Science Guy” is working to raise awareness about climate change, which he calls “the most serious problem facing everybody.” He has a new Netflix show coming out in the spring, a program modestly titled “Bill Nye Saves the World.” He’s finishing up a book— Everything All At Once: How Nerds Solve Problems—set for release this summer. Within a span of a couple of weeks last fall, he hosted an online telethon to benefit America’s national parks in their centennial year; celebrated Thanksgiving with famed astronomer and fellow science popularizer Neil deGrasse Tyson; tweeted an invitation to discuss climate solutions with president-elect Donald Trump; and promoted a limited-edition shirt—bearing a cartoon of himself and the phrase “It’s not magic, it’s science!”—to raise money for a nonprofit working toward 100 percent renewable energy.

But today, he really wants to talk about the Gates Hall webcam.

The camera, perched atop Cornell’s computing and information science building, offers a view of the Solar Noon Clock on Rhodes Hall that Nye designed and endowed. With a nod to his long-standing baseball fandom, it also shows the Hoy Field scoreboard—but not, to the Science Guy’s eternal chagrin, the actual games.

“If we zoom out, the whole field is blocked by the building!” Nye says, flipping open his laptop to display the offending evidence. “For crying out loud! There’s a webcam on top of Gates Hall, and it’s installed exactly where you can’t see the field!”

Our advertisers support your magazine. Give them a click in return!

It’s the first Wednesday in December, and Nye is chatting with CAM at the Cornell Club in Manhattan. He’s sporting a bow tie, of course—a navy blue number bearing the University seal that he had custom made from a conventional Big Red necktie. (The Cornell Store has since started selling its own bow ties; and yes, Nye owns those too.)

Nye’s indignation over the webcam is partly in jest—but not entirely. As he points out, “The camera is freaking there; you’re talking about moving it a meter.” In other words: a doable change would solve a problem and make things better for everyone (or, at any rate, for Big Red baseball fans who can’t make it to home games). And problem-solving for the greater good is Nye’s over-arching passion—be it in terms of finding ways to get more kids interested in the STEM fields, raising awareness about the dangers of pseudoscience, or advocating for scientific literacy. “We’ve gotten into a way of thinking, especially here in the United States, that expert opinions are not valued,” Nye says. “It’s very troubling.”

But just as Mary Poppins sang that a spoonful of sugar would help the medicine go down, Nye knows that if he wants to educate, he has to captivate. Back when he was doing his signature PBS series, “Bill Nye the Science Guy”—which ran from 1993 to 1998 and won him seven Daytime Emmy Awards—he’d, say, explain static electricity by having kids rub balloons on their heads. Nowadays, he does things like compete on “Dancing with the Stars” and then, a few months later, go head to head with an avowed creationist—advocating for evolution in a live-streamed debate that has been viewed on YouTube some 5.8 million times. He has acted on TV shows like “Numb3rs” and played himself on “The Big Bang Theory,” a science-friendly sitcom he calls “the coolest thing in the world.” (In the episode, which also stars Bob Newhart, uber-nerd Sheldon pursues a friendship with Nye and is ultimately rebuffed, leading him to describe his erstwhile pal as “Bill Nye the Restraining Order Guy.”) “I feel the more I’m in the public eye, the more my message of an optimistic future through science is available to more people,” he says. “It has to be entertaining first. That’s human nature.”

Nye grew up in Washington, DC, the child of two World War II veterans; his mom served as a codebreaker, and his dad spent years in a Japanese POW camp (where a lack of available timekeeping sparked a lifelong love of sundials, which he passed on to his son). His earliest science memories include seeing the craters of the moon for the first time through a rudimentary telescope. Then there was an epiphany sparked by a bee sting. “My mom put ammonia on it, and it felt better,” he recalls. “But then on the side of the bottle was a skull and crossbones, and I was like, ‘Are you trying to kill me?’ I realized there was more to it. There was chemistry.”

On the Hill, in addition to his mechanical engineering curriculum, Nye took classes in subjects from psychology to German. “It was too busy—I didn’t know how to pace myself,” he says. “I would always take courses that were too hard.” In engineering, his professors included David Caughey, who taught him introduction to aeronautics. Caughey recalls that when Nye turned in his final exam, he also handed him a model of a Supermarine Spitfire—a single-engine plane that the British flew in World War II—that he’d crafted from balsa wood and paper. “It must have taken him hours,” remembers Caughey, now a professor emeritus, “and he told me maybe this would mitigate his performance on the exam.”

Years later, after moving offices, Caughey lost the model. After he admitted as much to Nye, his former student—back on campus for a stint as a Frank H.T. Rhodes Class of ’56 University Professor—gave him a replacement, also handmade. “He’s a really nice guy—warm, thoughtful, friendly, and open,” Caughey says. “I’m proud that he was able to make a difference in a lot of kids’ lives, to open their eyes to the fun of science.”

Before becoming the Science Guy, Nye was a working engineer, heading to Seattle after graduation for a job at Boeing. His first brush with fame came when he won the city’s round of a Steve Martin lookalike contest; he got his start in TV doing science demonstrations on a local show. He was contemplating what would become his seminal program around the time of his 10th Reunion in 1987. Back on campus, he sought an audience with Carl Sagan, his former astronomy professor and the “science guy” of his time. “I met with him for seven minutes and told him about these things I wanted to do on television in Seattle,” Nye recalls. “He said, ‘Don’t do engineering demonstrations. Focus on pure science.’ It was fantastic advice. He said, ‘Kids resonate to pure science’—that was the verb he used.”

Nye followed Sagan’s guidance, and the ensuing show—which ran for 100 episodes—made him a beloved figure to a generation of kids. “People might say, ‘Bill Nye had this great engineering education, and look what he did with it,’ ” says Caughey. “Well, look what he did with it. He saw this problem of engaging kids in science and came up with an interesting solution that impacted a lot of people.” In recognition of his status as an American icon, the Smithsonian Institution recently archived a selection of his papers and memorabilia including annotated scripts, two Emmys, and a lab coat.

Nye’s new half-hour show, “Bill Nye Saves the World,” will feature him and a team of correspondents traveling the globe to explore issues ranging from vaccination to the genetics of sexuality and gender identity. “The shows are about topics that the general public is concerned about,” Nye says, “and we want you to have a scientific point of view when you think about them.” He describes his upcoming book, Everything All At Once, as being “about the scientific method, how everyone should embrace it and think critically.” His previous books include Undeniable: Evolution and the Science of Creation and Unstoppable: Harnessing Science to Change the World, which recently came out in paperback. The latter examines the factors that have driven climate change, delving into some hard-core science to examine the issue and posit solutions. “If you like to worry about things—and most people do—you are living at a great time,” Nye writes in the introduction. “Climate change is coming, and it is coming right at you.”

Curbing climate change isn’t Nye’s sole “save the world” mission. He says he has three major wishes for everyone on Earth: reliable supplies of clean water, renewably produced electricity, and Internet access. His eyes are on the skies, too: he’s the CEO of the Planetary Society, a nonprofit that Sagan founded to advance space science and exploration. Nye has also applied his engineering acumen to smaller-scale challenges: he holds a patent on ballet pointe shoes that provide better foot support, and he created a batting-practice bat (dubbed the “Fango”) with a pronged tip that picks up baseballs so coaches don’t have to bend over. 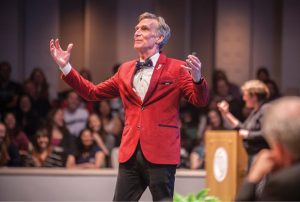 Nye—who’s aiming to attend his 40th Reunion this spring—has been back to campus numerous times over the years, including speaking at Charter Day Weekend and guest lecturing to Caughey’s students. In August 2011 he was on hand to dedicate the Solar Noon Clock, whose creation comprises one of his favorite Cornell-related stories. As he recalls, he traveled to Cincinnati to work with a major clock company on the device, which marks the moment when the sun is highest in the sky. “I made a special trip there with the sketch, and they said, ‘No, we can’t possibly incorporate a solar noon feature programmed from a laptop,’ ” he says. So Nye tapped mechanical and aerospace engineering professor Michel Louge for help, and his students tackled the problem over a weekend. “With a group of Cornell engineering students and three or four pizzas,” Nye recalls, “by Sunday morning, it was mostly working.”