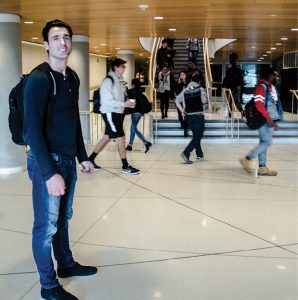 Ryan O’Byrne ’07 between classes at the Hotel School

When Ryan O’Byrne ’07 skated away from Cornell in the middle of his senior year to play in the National Hockey League, he cut a deal with himself: sooner or later, he’d finish school. “I knew if I didn’t go back and get my degree,” O’Byrne says, “I would regret it for the rest of my life.” After spending almost ten years in the pros—including the Montreal Canadiens, Colorado Avalanche, Toronto Maple Leafs, and a closing stint in Europe—the 6-foot-5-inch, 234-pound defenseman retired last spring. Last fall, he fulfilled his promise to himself—coming back to the Hill at age thirty-two to complete his bachelor’s in hotel administration in one final, intense semester.

A native of Victoria, British Columbia, O’Byrne played hockey almost as soon as he could toddle. He arrived at Cornell already drafted by the Canadiens, common practice in the NHL. As a student, his plan was simple: “Play my best hockey, and let the Canadiens decide if they were going to sign me in my senior year or earlier.” But, he admits, “My grades weren’t as good as they could have been.” He got called to training camp with a semester to go. “Leaving Cornell was a very hard decision,” he says. “I loved it here and had a close bond with my teammates. We’d been together four years, and you can’t replicate that connection in the pros.”

Suited up for the Big Red hockey team, for whom he served as a volunteer coaching assistant last fall.

The decision to return was easier. O’Byrne notes that an NHL player’s peak earning years are from twenty-two to twenty-eight—and that’s exactly the time it took for the sport to take its toll on him. “Once I turned twenty-nine, my body changed completely,” says O’Byrne, who bears an impressive scar from getting his cheek sliced open by a skate blade in 2012. The nasty cut—as well as a badly broken nose—were hazards of the job but not deal-breakers; the knee, hip, and back injuries were. After his stint with the Maple Leafs he played in Russian, Swiss, and Swedish leagues, a common route for aging pros, he says. The money was good, the travel fun. However, his chances of an NHL comeback were slim, he was a long way from home, and the thrill of the ice had ebbed. A career change made sense, and securing his degree was a top priority.

Returning to the classroom in late August, O’Byrne threw himself into a twenty-four-credit semester, racking up fourteen-hour days—and focusing on coursework as he once had on hockey. “This time, I was more serious about my studies—no question,” he said in mid-November. “The goal coming back was to get straight A’s, and I’m pretty much there.” A work ethic forged in a high-stress sport helped him meet the demands of a heavy course load, he says. But there were some specific challenges, like mastering Microsoft Office—not the sorts of skills he’d been cultivating on the ice. Reports a proud O’Byrne: “I can make a great PowerPoint slide now.”

If his age, sheer size, and unorthodox pedigree made him an obvious stand-out in class, he did his best to blend and contribute, says professor Tony Simons, who teaches a course on negotiation in the hotel industry that requires weekly teamwork on simulated contracts. “Ryan engaged as an equal partner with the other students,” Simons says. “Nontraditional students are always a refreshing presence, and he was no exception. Of course, the salary numbers he negotiated as a professional athlete would have stunned his classmates—but he didn’t really speak of that.”

Back on campus after a decade’s absence, he found that some things were the same, others very different. Back in the day, he lived with teammates in a Collegetown rental dubbed the “Hockey House”; now, it’s just another student abode on Catherine Street. Cornell’s physical campus has grown—but more striking to him was the panoply of programs on offer. “When I was here before, I was in a bit of a bubble and I didn’t recognize the depth of student resources,” he says. “It’s been eye-opening to see the range of career services and extracurricular programs.” O’Byrne’s next move: gain admission to a master’s program with an eye toward the field of real estate finance. “In hockey, you’re only as good as your last game; there’s a lot of stress and uncertainty every day,” he says. “That experience made it so I feel I can handle pretty much anything.”