Most people groan when they hear that a big storm is on the way. But for Rob Marciano ’91, senior meteorologist for ABC’s weekend edition of “Good Morning America,” work is more interesting when Mother Nature is at her worst. “Bad weather’s good for business,” he says with a laugh, “or at least good for job security.”

In addition to providing forecasts for the popular morning show, the former atmospheric sciences major reports for many ABC News broadcasts and digital platforms, including “World News Tonight.” Unlike some TV weathermen who just stand in front of a green screen to give tomorrow’s rain-or-shine projection, Marciano is a boots-on-the-ground journalist who has covered some of the biggest weather events and natural disasters in recent years. “Everybody has a little bit of weather geek in them,” he chuckles. “After all, weather affects people’s everyday lives. It’s the great equalizer.”

Marciano spent a decade as a news and weather anchor at CNN, where his reporting on Hurricane Katrina and the BP oil spill in the Gulf of Mexico helped earn the channel a Peabody Award. Since joining ABC in September 2014, he’s been front and center for blizzards in Boston, floods in Texas, and tornadoes in Georgia”not to mention lava spewing from a Hawaiian volcano. “Here, they want to show stuff as it happens as much as possible,” he says. “That’s been awesome and fun”and, at times, hair-raising.” He recalls how he and his team were following a powerful twister in Oklahoma in spring 2015 when conditions became so dangerous that even experienced local storm chasers fled. He pulled back as well, unwilling to risk his or his crew’s safety. As he puts it: “The last thing I want is for my epitaph to read, ‘Meteorologist dies of stupidity in a storm.’ “

Marciano is able to balance those fraught experiences with lighter moments, particularly when he filled in weekdays while “GMA” chief meteorologist Ginger Zee was on maternity leave earlier this year. Just as Zee does, he jumped in for fun segments like the “Ultimate Tailgate Challenge,” in which the anchors and contributors competed for the best game-day recipe. (Sadly, Michael Strahan’s Texas-style chili scored more votes than Rob’s “Sizzling Sausage and Peppers.”) He also traveled to Orlando for a sneak peek at a new, interactive Star Wars attraction at Disney World’s Hollywood Studios, where he goofed around with Darth Vader and Chewbacca. And, of course, he regularly banters with the crowds that gather outside the show’s Times Square studio; one Monday morning in February, he paused to take a quick selfie with a fan before going live to chat about the day’s forecast with guest Kermit the Frog”a conversation that, he says, thrilled him as much as meeting any rock star. “If I’m star struck by anyone,” he says, “it’s going to be Kermit or Miss Piggy.” 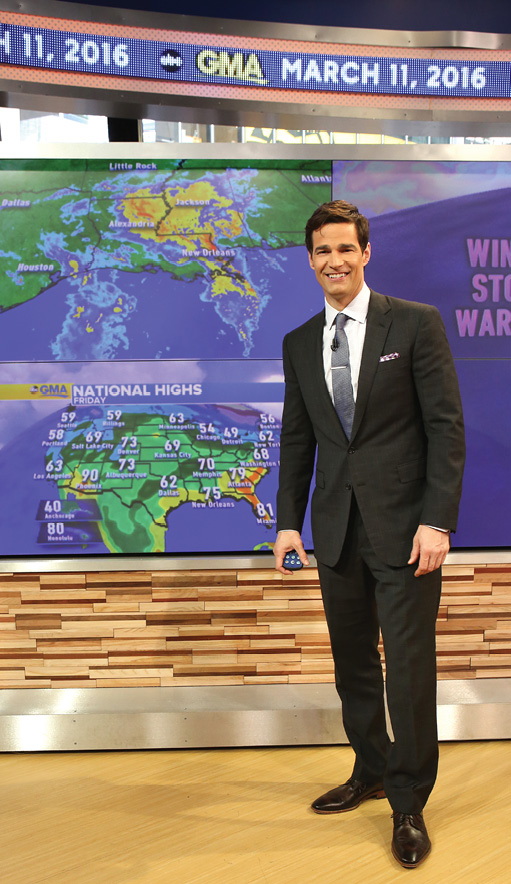 Sitting down with a much-needed cup of coffee in an empty green room after the broadcast, Marciano recalls how his passion for weather goes all the way back to his childhood in Glenville, Connecticut. He remembers driving his parents crazy as a kid by constantly flipping channels from newscast to newscast. “I knew exactly when every weather guy was on,” he says. Snowstorms fascinated him, and not just because he got a day off from school. “I’d lie in the backyard, and even if it wasn’t snowing yet, I’d look up in the sky in awe.”

While Marciano discovered his calling early, his career path has had some noteworthy detours. When he had difficulty landing a TV weather position after graduation, he worked for three years as a trader on Wall Street. And in 2012, while at CNN, he couldn’t pass up an offer to co-host “Entertainment Tonight””even though he says he’s “not a celebrity gossip kind of guy.” Still, Marciano says, “This was ‘ET’; it’s an institution.” He got to sit down with A-listers like Jennifer Lopez and George Clooney and go behind the scenes of Captain America and other blockbusters. Yet Marciano found he disliked asking the rich and famous about what he felt were private topics. “There were times when I worked at ‘ET’ when I really did not enjoy it,” he admits.

So after less than two years, Marciano decided to return to meteorology and landed at ABC. A major draw was the network’s investment in weather reporting; from on-air talent to producers to graphic artists, the entire team is made up of trained meteorologists. Says Marciano: “We have the chops to back up the talk.” According to longtime mentor Mark Wysocki, MS ’89, a senior lecturer in the Department of Earth and Atmospheric Sciences and the New York State climatologist, Marciano stands out because he takes the time to analyze data himself, rather than relying solely on computer models for predictions. Wysocki also has been impressed with his former student’s attempts to explain the science behind extreme weather, even during brief news segments. “But Rob was always like that,” says Wysocki. “He wants to go beyond what you do as a typical TV meteorologist.”