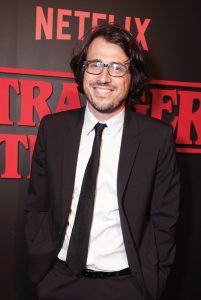 ON THE RED CARPET: Cohen at the premiere of the Net ix hit “Stranger Things” in summer 2016. Eric Charbonneau/Invision/AP

Hollywood producer Dan Cohen ’05 looks back fondly on his first job, which he calls excellent training for his current career.

As a high schooler in San Diego, Cohen repped a line of well-crafted, American-made cutlery—and he did pretty well. “The guy who trained us would joke, ‘You’re going to walk into a stranger’s house with knives,’ ” the former psychology major recalls with a laugh, “ ‘and walk out with money.’ ” He says that a main reason his sales pitch was so effective is that, well, they were really good knives—so he was exhorting his customers to buy something that he valued himself. “I don’t think my job now is that much different,” he observes, chatting with CAM during a visit to campus last spring. “I have to convince people to adapt something, direct something, buy a project, renew an option, give us the rights. It’s about salesmanship to a certain extent, paired with believing in something.”

A vice president with the production company 21 Laps Entertainment, Cohen was a driving force behind last year’s biggest streaming sensation: Netflix’s Emmy-winning sci-fi horror series “Stranger Things,” whose much-anticipated second season was released on October 27, just in time for Halloween. Among other credits, Cohen executive produced Arrival, the 2017 Best Picture-nominated sci-fi drama starring Amy Adams, and co-produced The Spectacular Now, a critically acclaimed indie coming-of-age tale from 2013. He’s got numerous projects in the works, including Kin, a sci-fi thriller starring James Franco; the road movie Kodachrome (about a family trip to the last remaining lab to develop the color film) with Elizabeth Olsen and Ed Harris; and a big-screen adaption of the dystopian young-adult novel
The Darkest Minds.

So what does a Hollywood producer do? According to Cohen, “The short answer is finding, chasing, developing, and believing in material—whether it’s a short film, a book, or a rough draft of a screenplay.” For Kin, for example, he fell in love with a 2014 short called Bag Man, about a twelve-year-old boy from Harlem who skips school to travel Upstate with a mysterious, bulky piece of luggage whose contents aren’t revealed until the final moments. The filmmakers envisioned expanding it into a feature, so Cohen found a writer and helped develop the screenplay. “Then we cast it with actors, got the money in place to make the film, and I was day-to-day on the set, from preproduction through production—meaning figuring out the locations that you’re going to shoot, making sure everyone’s schedule syncs up, looking at the weather to make sure we’re outside when it’s good and that we have cover sets in case it rains.” 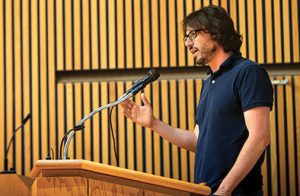 When Cohen came back to the Hill last April, for the first time since his graduation, it was a bit of a full-circle return to his cinematic roots. In addition to giving a career-guidance talk to students in a packed Goldwin Smith lecture hall, he introduced a screening of The Spectacular Now at Cornell Cinema—where, once upon a time, he sold tickets, wrangled film reels, and viewed movies (both classic and current) that shaped his professional path. “I had always gravitated toward independent film, and the movies that came out while I was in college, while I was figuring out what I wanted to do, have an especially important place for me,” he says. “Donnie Darko, Lost in Translation, Eternal Sunshine of the Spotless Mind, Collateral—those are some of the domestic films that really left an imprint. In this moment of not being sure what I wanted to do, these great films I was seeing helped convince me that there was something for me to do [in making movies].”

As a sophomore, Cohen took a course (taught by then-grad student Nick Davis, PhD ’05, now a professor at Northwestern) that entailed studying a dozen films over the course of the semester. “That’s where I was able to really see how films could have multiple interpretations, extra layers, and rewatchability,” he says. “We covered the gamut of genre, scope, period, and language. We watched The Matrix, Boyz in the Hood, Daughters of the Dust, A Woman Under the Influence. It blew my mind, and that kind of set me off.” Senior year, with his sights set on a career in screenwriting, he created an independent study course, advised by Davis, in which he worked on a screenplay and analyzed movies from multiple angles—for example, studying the novel, script, and film of Ordinary People. After graduation, he moved to L.A. aiming to break into the business. “I spent six months writing, and I always say waitering too—because that was my everyday. I would write and then wait tables. And I actually enjoyed it, but after a period of time I just wasn’t loving the writing part anymore.”

He got a job as an assistant at a talent management firm, eventually shifting to a production company; in 2010, he joined 21 Laps, headed by Shawn Levy, a prolific director and producer whose credits include the Night at the Museum series. Since then—as the Hollywood Reporter put it when it named Cohen to its “35 under 35” list of emerging industry leaders in 2014—he “has garnered a strong reputation for bridging the indie and commercial sectors by matching up-and-coming directors with career-making projects.” 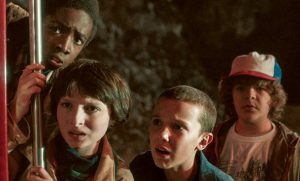 Not the least of those has been “Stranger Things,” which became a cultural darling when it debuted last year—getting rave reviews and spawning innumerable Halloween costumes, including one sported by comedian Amy Schumer that went viral. Set in a small Indiana town in the Eighties (and featuring Winona Ryder, a star of that decade), it centers on the search for a missing boy who has been snatched into a monster-filled alternate dimension. Cohen, who says the pilot script “might be the best thing I’ve ever read,” chalks up its broad appeal in part to how the story resonated with various ages and evoked classic films of the era. “The characters are so well rounded and real,” he says. “They’re like the flawed adults in Poltergeist and Close Encounters of the Third Kind, who are disbelieving of the supernatural and have their own vices, yet you love them. The teens are grappling with their sexuality and dealing with real monsters, like in A Nightmare on Elm Street or Halloween. And the kids are like those in Stand by Me or The Goonies; it’s a coming-of-age, but fun, and they’re dealing with big themes of friendship and being outcasts.”

Cohen’s all-time favorite movie is Breaking Away, the 1979 bicycle-racing picture about working-class friends in an Indiana college town, pondering their futures after high school graduation. (The first film he ever saw in the theater: 101 Dalmatians.) Asked if he ever feels star-struck by Hollywood glamor, Cohen says it still happens—though not so much when he meets bold-faced names as when he encounters actors and filmmakers whose work touched him growing up. “Maybe the most star-struck I’ve ever been is when I met Alan Ruck, who played Cameron Frye in Ferris Bueller’s Day Off,” he says. “That guy shaped my childhood as much as anybody else.”