Rebecca Rutstein ’93 majored in fine arts in the College of Architecture, Art, and Planning—but it was an intro geology class that shaped her career. On a whim, she took a course for non-science majors—the proverbial “rocks for jocks”—that entailed field trips to Ithaca-area gorges and state parks to study how their geologic features had formed. “It stuck with me, and it ended up weaving itself into my work many years later,” the Philadelphia-based painter and sculptor says. “It changed the trajectory of my art—and it really changed my life.” 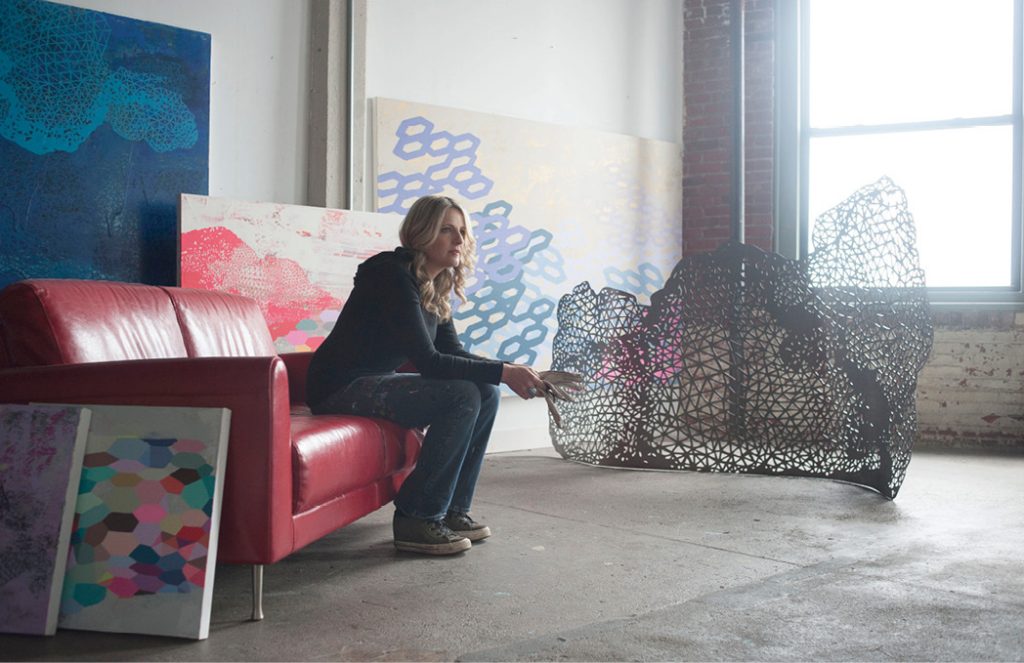 Nearly a decade after graduation, Rutstein was leafing through her old geology textbook when she came across diagrams depicting plate tectonics. “I was taken by this idea that forces underneath the surface were causing all this eruption and upheaval above,” she says. “It resonated for me as a metaphor of experiences I was having in my own relationships. I put one of these diagrams into my painting, and from there, topographic maps. That was the beginning of this intersection between the two.” 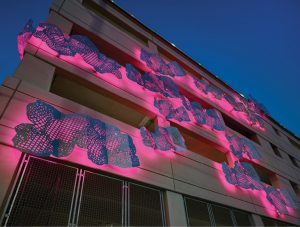 Rutstein has since traveled to the Canadian Rockies, Iceland, and the Big Island of Hawaii to produce work inspired by their striking geologic formations. More recently, she has served as an artist in residence on sea voyages to map the ocean floor in high resolution, including a trip from the Galápagos Islands to San Diego and another from Vietnam to Guam. As the Huffington Post put it in 2013, Rutstein “creates self-made abstractions of lands that never were, tracking the parallels between geographical forms and the human experience . . . The artist aligns the ups and downs of nature’s forms with the eternal fluctuations of life and love.”

The ocean voyages themselves have become a passion: Rutstein has become fascinated by the concept that so much of the Earth’s surface remains unexplored. “Scientists have only mapped 5 to 10 percent of the ocean floor in high resolution,” she says. “We know more about the surface of Mars.” The trips have also influenced her creative process: sailing in the eastern Pacific in 2015, she was working on a painting as the vessel was rocked by severe weather. “I thought, How can I go with the flow rather than fight this?” she recalls. “I started pouring paint and letting the ship’s motion dictate its movement.” She has continued to used the poured-paint technique in her Philadelphia studio. “It’s very process-oriented,” says Rutstein, who also holds an MFA from Penn. “I can’t control what’s going to happen.” 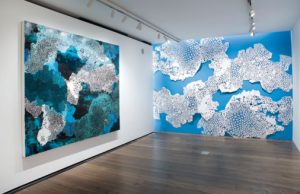 Late last summer, about a dozen of Rutstein’s paintings were on display on the Hill in “Convergence,” a show in Sibley Hall. She’s had numerous other solo exhibitions, mainly in Pennsylvania galleries, and has participated in group shows in such places as the New York Hall of Science, the State Museum of Pennsylvania, and the annual Art Miami fair. Her work is in the collections of institutions like Temple University—which has her color-shifting, light-and-metal sculpture Sky Terrain on permanent display—and Johns Hopkins Hospital, and in 2008, she had a year-long exhibition of paintings at the Philadelphia Airport.

Rutstein is tentatively scheduled to go on another sea voyage in 2018, traveling with a science team on a research vessel off the coast of California. Her hope is to view the deep ocean floor firsthand by going down in a mini-sub to observe such phenomena as hydrothermal vent systems and bioluminescence. “I just want to get back out to sea,” she says. “It’s this weird pull that I would never have imagined.”