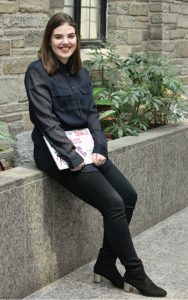 CAMPUS CONSERVATIVE: Olivia Corn ’19 at the Law School in February. While last fall’s presidential election made for a contentious atmosphere on the Hill—with talks by Rick Santorum and a Tea Party founder sparking disruptions and discord—by spring semester the mood had calmed down considerably, and a speech by former House Speaker Newt Gingrich was held in March without incident.

Manhattan native Olivia Corn ’19 says she was “blissfully ignorant of politics” until high school, when she was assigned to watch an Obama-Romney debate—and got hooked. The daughter of lawyers Ruthanne Kurtyka ’70, JD ’73, and Harvey Corn, JD ’73, Corn is chair of Cornell’s fifty-member chapter of College Republicans, serving during one of the most divisive political moments in American history.

She made headlines when the New York Federation of College Republicans revoked her chapter’s membership for endorsing Gary Johnson—but swiftly reversed itself after the Cornell group threatened a lawsuit. Her visible role has had its upsides: getting quoted in a New York Times piece on campus conservatives; being featured as one of the “students standing up to Trump” on MTV News. But it has also had downsides, from being assaulted on Libe Slope to being insulted by Ann Coulter ’84, BA ’85 (in a tweet to the radical-right pundit’s 1.4 million followers).

This spring, Corn ran unsuccessfully for student-elected trustee. The history major—who plans to earn a JD and pursue a career in politics—talked with CAM in one of her favorite spots on campus, the Law School atrium. The following are excerpts.

We’re in a remarkably incendiary political moment. Do you feel lucky or unlucky to have this job this year?
Really lucky. It opened up a lot of opportunities. I got to speak at a Gary Johnson event in New York City in front of 3,000 people, participate in a millennial panel on CBS, and talk to a lot of national media. None of that would have happened if this election cycle hadn’t been so crazy and controversial. Yeah, it was difficult at times, and there were certain things that I wish hadn’t happened. But it opened up so many doors and showed me what the world of politics could be like.

What’s it like to be a conservative on a predominantly liberal campus?
It’s frustrating, because people conflate Donald Trump with the Republican Party. I understand that; he’s the president and he ran on the Republican ticket. But I’m a very moderate Republican. I’m pro-choice, I’m pro-LGBTQ rights, and I don’t like a lot of what Donald Trump stands for, but I still consider myself a Republican.

You’ve argued that conservative views should be more widely represented on the faculty. Why do you think that’s important?
As a conservative, having faculty mem­bers who are liberal has given me the ability to engage in debate and possibly challenge my own assump­tions. There are thousands of people on this campus who aren’t exposed to that kind of opposite opinion.

How have your politics affected relations with your peers?
I’ve lost a lot of friends because of my position on campus. I’ve had people berate me on Ho Plaza. I do feel ostracized sometimes.

Do you feel that people treat you differently in your position because you’re both female and an underclassman?
I’ve talked to some of the past chairs and they said I’ve had, by far, the hardest time. I think it does have to do with the fact that I’m female. A lot of people don’t think conservatives or Republicans are supposed to be female, so I threaten their stereotypes. I think it also has to do with the fact that I’m young and people think they can push me around. But I love challenging assumptions. I always say, “If you don’t understand why I’m a Republican, come talk to me. Let’s have a conversation.”

Campus protesters disrup­ted Rick Santorum’s lecture last November. What were your thoughts about this?
We thought he’d be a good person to help explain how Donald Trump became the nominee and won the election, but all anybody wanted to talk about was that he had certain views on gay people and abortion. I understand that his views don’t align with a lot of the views on campus—they don’t align with mine—but that wasn’t why he was there. He could barely get two words out without someone screaming at him. When I was getting up to introduce him, people called me fascist and racist, told me I was a disgrace to women. I was really saddened. I think he should at least have been given a certain degree of respect.

As you reported to CUPD, you were assaulted on Libe Slope the night after the presidential election. What happened?
It was six or seven, and I had just gotten out of a meeting in Goldwin Smith. Out of nowhere I felt two hands grab me and throw me down, and the person yelled that I was a racist. I remember being shocked. I knew people were upset that Donald Trump had won, but I didn’t support him and wasn’t thrilled at the outcome. It was scary, and I now walk with an alarm in my bag at all times.

What advice have your parents given you about dealing with all this?
That I need to have a thick skin and be prepared that this is some of the backlash I’m going to receive as a Republican. They said, “Get ready, because this is only the beginning. If you become a national politician, you’re going to have people from all over the country disagreeing with you and saying horrible things.”

Given Cornell’s liberal bent, what made you want to come here in the first place?
My mom and dad are Cornellians, and I’ve wanted to go here since I was a little girl. It’s heaven on earth to me. So even though I’ve had some issues on campus, there’s no place I’d rather be.

3 thoughts on “Politics as Unusual”